There was some confused when MeegoPad T05, T06 and T07 Cherry Trail TV dongles details surfaced with specifications changing from sites to sites.  One forum post on x86pad.com, clarified MeegoPad products line up, including a new MeegoPad T08 Cherry Trail projector with battery. MeegoPad T07 was confirmed to be actively cooled with a small fan, and come with 2GB as seen on GeekBuying and GearBest, but the company also just launched a flexible funding Indiegogo campaign for the 4GB RAM version. 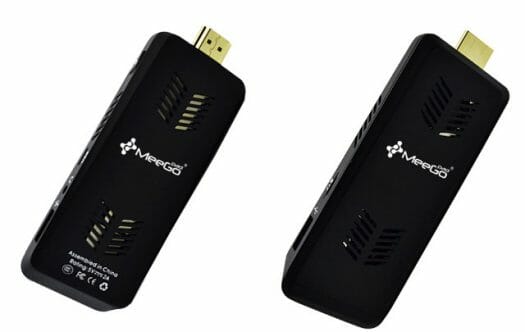 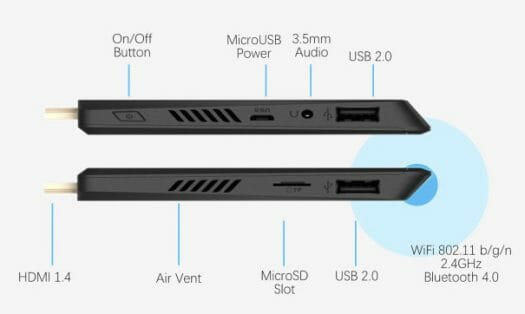 MeegoPad T07 is pre-loaded with an activated version of Windows 10. But note that the company do not have a stellar track record when it comes to license as they apparently shipped a MeegoPad T04 with an unlicensed Windows 10 to Lon Seidman, a YouTube reviewer, and then provided a link to some cracking software to fix the issue…

They ask for $109 for the “early supporter” reward, which includes T07 with Windows 10 Home,  an HDMI extension cable, a micro USB to USB cable, a power cable, and a carrying case. The company has also included MeegoPad T05 in the crowdfunding campaign featuring 2GB RAM only, and available barebone for $79, or with Windows 10 Home for $94. Shipping is not included, but is free to North America, and the few European countries I tried, and $10 to the rest of the world. Delivery is scheduled for January 2016.

with 4GB of RAM this can be used as a decent Office desktop machine. Plug it in the a screen, connect a Bluetooth keyboard/mouse and you have a cheap workstation.

Isn’t MeeGo a trademark of the Linux Foundation? http://www.linuxfoundation.org/about/linux-foundation-trademark-usage-guidelines

Z-8300 only supports 2GB RAM. I did a little checking a while back and found out that the Z-8300 uses the same package as the previous generation so is probably more or less a drop in replacement for manufacturers. The Z-8500 & Z-8700 use a different package, hence why we’re seeing so many Z-8300 based devices.

Beware, the youtube reviewer mr. Lon Seidman did not tell the truth about meegopad, he bought the product from a third party seller, and it was the third party seller that suggested the crack. I advice the potential buyers to investigate something before believing anything written or said on the web.

That’s the problem with these manufacturers and vendors – it’s nearly impossible to do any vetting or due diligence…what is the evidence that Lon “lied” vs just being ignorant given this?

@konstantinos
That’s the link in the product description: http://www.amazon.com/gp/product/B013HZHJA8/
I read “Sold by MeeGOpad”. So either it’s been sold by MeegoPad themselves, or somebody impersonates MeegoPad on Amazon. If the latter, the real MeegoPad should ask Amazon to take down that vendor, provided of course MeegoPad is a registered trademark. It looks like they’ve registered it: https://trademarks.justia.com/865/92/meego-86592972.html

anyone any idea how the eMMC performs (read/write speeds).
Also a pity there is no USB 3.0.
Also I’m curious on how well the WiFi performs. My experience with arm based dongles is not that good.
(and of course it is a pity they do not offer a barebone version without windows of the T07; I just want to run Linux on it; for the T05 the barebone is $ 15 cheaper than the W10 one).

@Jean-Luc Aufranc (CNXSoft)
if you look below it says: “Ships from and sold by BoLv Trade Co.,ltd” Doesnt that suggest a third party seller? You are not supposed to see this if you buy it directly from meegopad. Funny thing, is that mr. Lon Seidman in the t04 model review video suggests the viewers not to buy the item because it has licence problems, yet he has his affiliate link connecting to third party seller’s sales page. His feedback also is written below meegopad and not the actual seller.

@konstantinos
OK. Here’s the screenshot just to put this in context.

It could have been possible that he bought from the other seller (BoLv Trade), but it would have been unusual since that seller ships from China, while “MeeGOPad” appears to ship from the US.

@Jean-Luc Aufranc (CNXSoft)
The truth is that Mr Seidman changed his link now, connecting to the original seller, meegopad. His previous link was connected to this seller: http://goo.gl/FmWSKN
Beware from his “honest” reviews.

@fossxplorer
Nah, my Meegopad T01 has been up and running 24/7 for 6 months and I haven’t got a single problem with it.

@konstantinos
I asked about this directly to Lon: https://www.youtube.com/watch?v=wUZtkkyDfys&lc=z13purxiyxbczn2yd04cdjyglvbtjtzwigc

Lon has now replied that it’s from Meegopad:Lon Seidman
+cnxlinux Got it from the MeegoPad seller on Amazon. They are not reputable.﻿

@qwiqooq
Is Linux possible on this?

I do agree that MeeGoPad’s third party sellers are selling unactivated products and you can’t even figure out which one is the official store, which is buried beneath other stores. MeeGoPad doesn’t have a English team, but they should improve their presence and name brand and crack down on false listings.

Check out the forum @ http://forum.x86pad.com for some details.

lol, i saw that Lon seidman changed the link, first it was the daretang store, later when i checked back it was MeeGOpad store.
He just replaced it with an identical advertisement.

If you want to have 4GB and Windows 10 activated, Amazon US should be the way: http://www.amazon.com/MeeGoPad-Storage-x5-z8300-Windows10-Bluetooth/dp/B013DPJ0WC

A Windows 10 mini PC license costs about $25 and paid by the manufacturer. I’m not sure you can buy that license yourself though.

I live in the EU.. to avoid import tax.. i was looking at tinydeal`s eu warehouse 🙂
~
Cheers