I received my first Amlogic S905 TV box last week with K1 Plus, and although I have not reviewed it yet due to some issues with Google Play, I’ve run some benchmarks on the Amlogic S905 platform, which some people mentioning that results could have been impacted by the small heatsink leading to CPU throttling. The good news is that I know have a new Amlogic SD905 TV Box to play with as GearBest sent me Beelink MINI MX TV box. Today, I’ll take a few photos of the device and the board, before hopefully publishing the full review early next week.

I received the package via DHL, and thanks to its low price I did not have to pay custom duties or VAT. 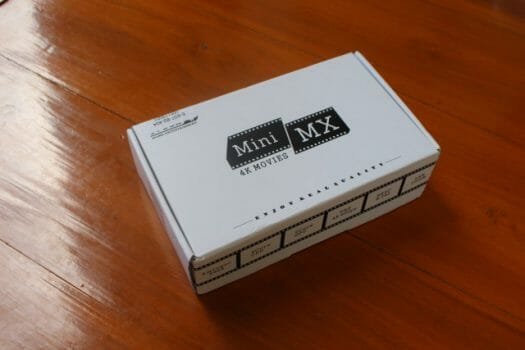 The package does not show any specific brand, only Mini MX 4K Movies products, as well as the specifications on the back.

The device is quite thinner than some of the other TV boxes I’ve reviewed recently. The front panel has a small circular window for the power LED, while one of the side comes with a micro SD slot, and a USB port. The main ports can be found in the rear panel with an optical S/PDIF port, Gigabit Ethernet RJ45 connector, HDMI 2.0 output, , another USB 2.0 host port, and the power jack.

There aren’t any screws holding the two parts of the case together, so you need some rigid and sharp plastic tool to pop up the parts. 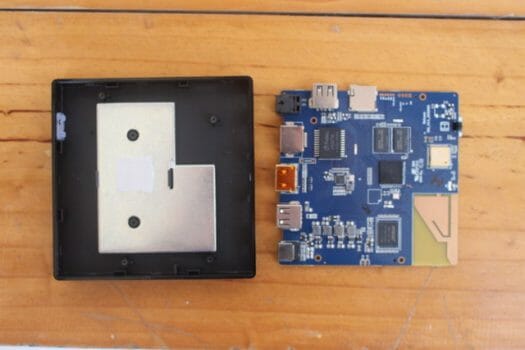 The WiFi antenna is on the board itself, so I had nothing to break this time.., and there’s no heatsink on the processor, but instead heat dissipation is done via a themal pad glued to a metallic plate fastened to the top of the case, which should provide better cooling than the tiny heatsink found in VideoStrong K1 Plus.

The back of the board has nothing much, expect the recovery/firmware update button on the top right of the picture, and a 4-pin header for the serial console, on the right side.

Since they own Beelink brand, it’s no surprise to reading the board was made by Netxeon, with the board name reading S95_V2.0_20150909. Two Samsung K4B4G1646D-BCMA DDR3 chips bring 1GB RAM to the device, while FORESEE NCEFAT28-08G NAND? flash takes care of the 8GB internal storage. Ampak AP6212 wireless module adds Bluetooth 4.0 and 2.4GHz WiFi 802.11 b/g/n to the device, and Pulse H5007NL magnetics and Reatek RTL8211F Ethernet transceiver confirm Gigabit Ethernet support.  Beside the 4-pin serial console header, there are also 6 solder points to connect a JTAG debugger.

I’d like to thank GearBest for sending a review sample. If you are interested, you could purchase Beelink MINI MX from their website for just $40.79 including shipping with BEELL coupon. Alternative shopping options include GeekBuying ($44.99), eBay, Amazon US ($55), and a few others.

Hello, I don’t know, but for me it seem to be a very good design. The housing desing is also very nice. With usb and Spdif on back. Hope HDMI will be HDMI2 and Kodi will run fluently. Does this box be a good upgrade from a Chromebox with Intel 2955U and Openelec? I want to have the ability to start the device with the remote control

This is the box that I’ve had my eye on since I bricked my S805.

Will you be reviewing it at all?

@TheLegendOfMart
As long as they are no road blockers in the firmware I’ll review it, as I normally review all the devices I receive.

I badly need to order a S905 box
For me it will be this one Mini MX or K1 plus.
Waiting for both reviews, so will let @Jean-Luc Aufranc (CNXSoft) decide 🙂

Ordering 4 by the way, so hope one of these will be of acceptable quality..

So are these devices suffering from a hardware or firmware bug/missing feature in S905? Any news on this? Do you still recommend to hold off on purchases of S905?

Same box as “beelink” x2 , i guess we now know who made that one (netxeon)

Ordered two of these from GB but still awaiting delivery, really excited to see more info/review… I ordered knowing nothing about these boxes and have now a good unerstanding of the niche,! Please, more info/review!!

there is an on/off switch?

@Jean-Luc Aufranc (CNXSoft) Good that you got this already, I ordered mine more than 10 days a go and is not even shipped yet.
Since you mentioned issues before (probably around the HDCP 2.2 certification) can you please advise if those were addressed and this will be the final, problem free version of the device. I would really hate if I have to send it back for replacement of a potential new box in a month? Thank you.

trentbg- also here still not shipped! It’s been over 2 weeks for me (GB)!

No. The device turns on once it gets power. You can then turn it off trough the os or (afaik to standby) with the remote. In case you lose the remote and want to turn it on the only way afaik is a power cyle.

@asht
Funny, I guess yours and mine both got shipped at the same time. I still hope that DRM issue will be addressed somehow in the future, its the last thing to made it a perfect device.

When you gonna publish playback review? Interested to know if DTS and DOLBY supported like in Xiaomi 3 Mi box based on same s905 chipset.

@eugene28
If everything goes smoothly, I hope to publish it this week-end.

I ordered that box. Hope it has the dts inside. Can’t wait until this weekend for your review ;).

@hxm
No DTS support for PCM output (except in Kodi, but video decoding is not working well right now).
DTS via HDMI or optical out to AV receiver does work however.

Could you share the way in you install linux on this device?

It should get simpler overtime, if people get involved.