Xiaomi unveiled Mi 3 TV box based on Amlogic S905 processor a while ago, but since we’ve got so many Amlogic S905 boxes on the market, and the interface is only in Chinese, I did not find it that interesting. But somebody did a teardown of the device, and sent me some good pictures revealing that the device uses Amlogic S905-H with DTS and Dolby licenses paid for and enabled. So that means just like for Amlogic S812, where there’s a S812-H with Dolby and DTS, there are two versions for Amlogic S905. I understand the silicon might be the same, but the SDK will differ (TBC).

There are few connectors as on other Xiaomi TV boxes: power jack, HDMI 2.0 and AV outputs, and one USB port. Xiaomi are not big fans of Ethernet, and there’s no RJ45 interface in the new model either. Some websites mention a micro SD slot, but it’s clearly not there. There’s also a IR receiver shown at the bottom, but the remote control supports both IR and Bluetooth and features a 6-axis gyro and voice support. 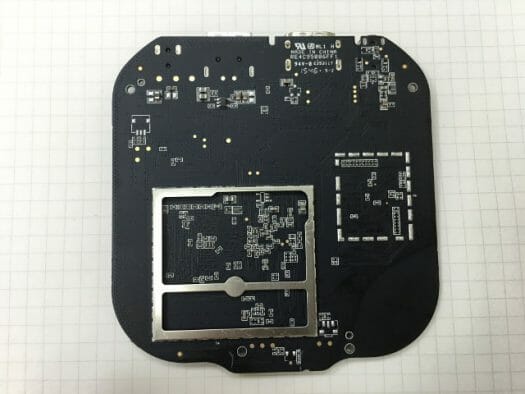 There’s no much on the bottom side of the board except a shield. One the software side, the box is said to run an “Google CTS Certified Android 5.0 system” with a Chinese interface only.

Xiaomi Mi 3 TV box can be purchased on GearBest or GeekBuying for respectively $61.79 and $71.79, but I’d only recommend it to the most adventurous, or people who can read Chinese, and potentially are happy with setting up a VPN. [Update: One person provided instructions to root the device, and install third party apps such as Google Play on previous generation Xiaomi Mi TV bxoes, so it might also work on Xiaomi Mi 3 TV box]

Thanks to Steven for the photos!

The instructions for root and install third party apps, it seams are for older Xiaomi’s Miboxes.

Any one probe this method on 3rd generation Mibox?

@Txemoto
Oh. I see, I misunderstood. One other person gave me that link with regards to Xiaomi 3, and I did not check in details. So I’m not sure it will work, but still worth a try.

you said, that the silicon might be the same, but the SDK will differ. can it be possible to put the SDK with the DTs licence in the S905 box ? (if yes it will be cool if beelink can propose that for a good price)

@Mike, i own Minix x8h the price is justified by : 1 – a good quality product (ex number of condenser used to avoid shortcut or power instability…) 2 – good support (forum with specific section for each product) + i got a lot of firmwares update by OTa from minix) 3 – stability of the firmware for sure they invest more money than other brand to produce better product. AFAIK minix neo u1 and xiaomi Mi 3 are the only box’s that use the s905h. I didn’t know that when i ordered the beelink box. I asked Gearbest about… Read more »

Afaik SDK is same for H and B variants of SoC. Dolby and other licenses are read from SoC and based on that features are working or not working. For KK and 8xx SoCs there were patched libs that make these stuff working, but afaik no such thing for Lollipop SDKs (yet).

price of H and non-H soc is same, and license price i guess is 1.x or maybe 2.x usd per device so dunno why on market we have device with s905 69usd and some companies try to sell at very high price?

That black solder mask makes the pcb look like something taken out of macbook. I bet Xiaomi did it on purpose, they are aiming to be Apple of the east :).

I think that the price depends on the brand structure (staff on R&D, support etc). Xiaomi have good price but it always miss something. For me ethernet port is a must have on a media box.

we heard that soon there would be a revision of the s905 chip that will enable vp9 and more.
maybe s905-h is that revision?

we would need to check whether it supports vp9, and that will answer our question!

@Ron
Xiaomi has told Amlogic they’d like to get an SoC with 4K VP9 to be compliant with some new rules with Google’s Android TV certification. So Amlogic is working on S908 processor to bring that to market. I’ve read it might be ready by Q3 2016.

changing the interface is a glitch ,but I personally find the motion sensing controller is interesting, playing wii with Mi box…https://www.youtube.com/watch?v=ZbQERrR6ZRA

Minix U1 using S905-H (with DTS/DD licenses) – is it true information?

Another review in Spanish
http://www.adslzone.net/postt398770.html

I went into the deep and ordered one of these boxes. The specs are good with dts license and ac support.
One should be able to change the interface to English!

I tried that and some more current methods to root this last version of xiaomi’s box and didn’t work, the mi box ver3 is NOT the same product as mi box 3 tv box, this last one has no sd card, comes with android 5.0, [email protected] support and that annoying GITV chinese TV menu, was officially launched on Nov 2015, all the information of how to root this version would be posted after that date.

I received this box last week and was able to change the language to English. It runs Android 5.1.1
Kodi runs fast and smooth but unfortunately the sound drops every 3-4 seconds using passthrough over hdmi.
I tried several distributions

I managed to root this box by downgrading the firmware.

Look closely to the first picture.
Wifi chipset is BCM4345.
Please update it in your text.