Amlogic S905 is the first 64-bit ARM processor by Amlogic, and comes with four ARM Cortex A53 cores coupled with a Mali-450MP GPU, with S912 to follow later with the same CPU cores, but more powerful Mali-T7xx GPU. With Acemax G9C we already have one company working on an Amlogic S905 TV box, but Eny Technology just informed me they are about to launch two models based on Amlogic armv8 processor: EM95-MXQ, which looks exactly like G9C, and EM95 with a different casing, but very similar specs. 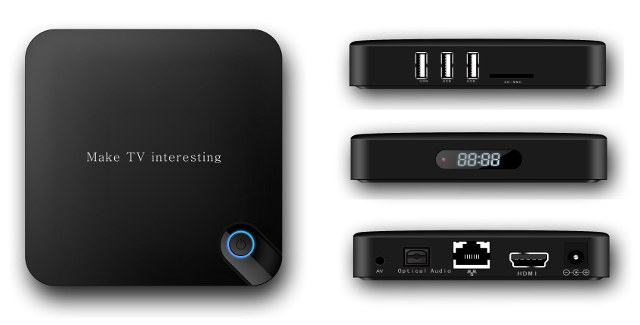 The box will run Android 5.1 Lollipop, and the company sent me a short video showing the system booting, and they claim development is nearly complete.

Pricing is not available publicly yet, but that mean we should soon have affordable 4K Android media players supporting 2160p @ 60 Hz. You can visit EM95 product page if you want to contact the company to order in quantities.
[Update: July 17. Picture of EM95 board 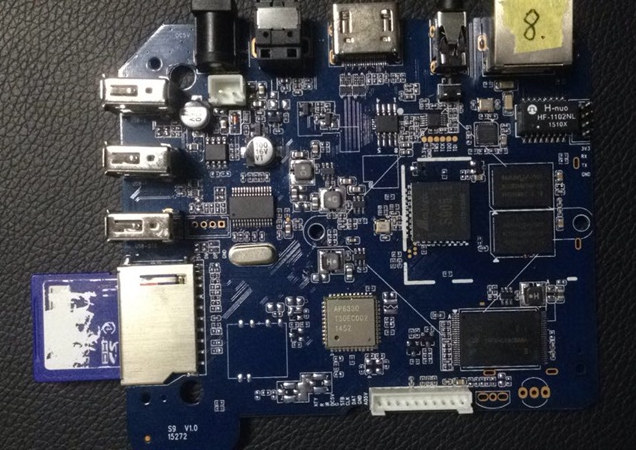 Some ports still do not match the 3D rendering though…
]

Love the clock on the front!

This photo is photo of new Alibaba media player and by layout cannot fit in this fake photoshop images of ENY.

@kusta
Good point.
Most people only look at the top photos but don’t realize the board can’t fit inside.

The device has no heatsink, which is a must for a TV box and probably will only get 1 firmware update before ENY jumps to a new device & chipset again, completely abandoning their older devices.

@kusta
Oops.. well spotted. That board must be for EM95-MXQ (Post now edited), and I’ve asked them if they have a picture of EM95 PCBA.

pitty it doesn’t have AC wifi like the rockchip rk3368 has.

cnxsoft :
@kusta
Oops.. well spotted. That board must be for EM95-MXQ (Post now edited), and I’ve asked them if they have a picture of EM95 PCBA.

Yeah, my contact at AMLogic says this board is designed as prototype for Alibaba Video service for China market, so probably ENY as Acemax trying to get attention and customers by releasing non-existing photos. I will try to get sample of S905 board from Alibaba next week.

AMLogic S905 samples for development will be available only at mid-August.

Thanks but no thanks.

Rockchip retailers like Nagrace/UGOOS have OTA updates for their TV Boxes.
For other Chinese chip manufacturers like AMLogic, Allwinner, nothing.

Doesn’t Pivos, MINIX, and Matricom have OTA updates for their Amlogic devices?

I know at least MINIX have Amlogic devices and better support than most today.

@mo123
WeTek is another that offer OTA updates and great support for its WekTek Play which it too is an Amlogic based device.

Do they even support 10-bit HEVC? Previous SoCs was 8-bit only.

System UI base on Amlogic S905

I had pre-order one from Amazon, I think it’s the best choose

When I try update the system. It fails and tell me “Check Failed! Check Your OTA Server Argent”

Where do I find the OTA Server Agent?

@Jotnar
That simply means they have not setup an OTA server. There’s nothing you can do about it.

Well simply do manual update, some time is much better than the one supplied by seller
If you get the right software you will get and OTA working.
Most5 of the times they just changing the housing box