MQmaker launched their WiTi router on Indiegogo in early August, and they raised close to $30,000, enough to go into production. However, some people are understandably wary of crowdfunding campaigns, and likely postponed their decision to see how the project would progress. The good news is that the AC1200 board is now available for $79 + shipping ($9.05 in my case) on Aliexpress. 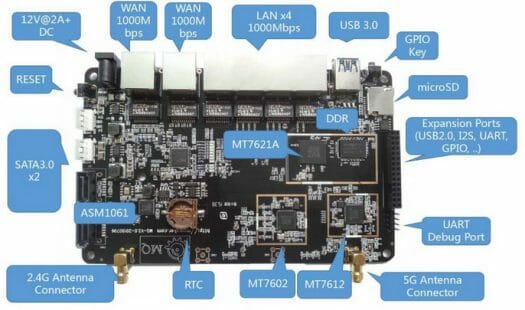 WiTi router specifications have not changed much:

The options for 512MB RAM, and four RF antenna connectors are not available right now. A version with 512MB is however sold on Taobao for 520 CNY (~$81). [Update: The 512MB version also shows for $89 on Aliexpress, for some reasons on mobile website only].

The board will ship with two SATA data & power cables, a serial-to-USB cable, one 2.4GHz antenna, one 5.8 GHz antenna, a 12V/2A power adapter, and an acrylic enclosure. The latter not shown in any pictures but it should probably look like the dual HDD NAS shown in the video below.

Documentation and software support is the most important for development boards, and resources can be found in MQmaker’s documentation page with instructions to build the kernel and make your own image, as well as a tutorial to create the NAS shown in the video above, and links to schematics (PDF) and datasheets and MQmaker’s github account including OpenWrt for WiTi board source code. WiTi board has also been mainlined to OpenWrt, although some more work remains for it to be working as well as the provided firmware.  You can ask questions and get support via the forums.

Waiting for tests on SATA and USB3 performance…

@vickycq
you have some tests here https://mqmaker.com/tutorials/making-your-own-nas-with-witi-board/
about 19MB/s Samba Write Test on SATA RAID 1 (2 disks)

Keep in mind that the performance of drives will depend a lot on the file system used. The default file system in OpenWRT is very slow compared to some third party implementations, although those are rarely free.

@TLS
Which file system would you recommend?
I’ve found some benchmarks (from 2010) @ https://forum.openwrt.org/viewtopic.php?id=27750

I remember NTFS performance varies a lot with the processor performance. The Mediatek processor here should make it look better than on slower hardware.

Is interesting that this has connectors for the wifi antennas rather than them being fixed in place. Anyone know how I’d go about putting some larger antenna on to get better wifi coverage in my house? Or would that even work?

@Jean-Luc Aufranc (CNXSoft) The problem is that the performance options aren’t open source. Tuxera has some very good stuff, but you’d have to license it for your product and most companies aren’t going to think it’s worth the extra cost. I know Asus uses it some of their high-end routers. It’s also important to keep in mind that SAMBA seems to be a huge bottle neck using OpenWRT and you’ll see about a 50% jump in performance using FTP. Some of the performance will also depend on the USB 3.0 implementation and I know this specific SoC isn’t the fastest… Read more »

@TLS
I don’t understand how those “High-end routers today are doing around 90MB/s over SAMBA” have something different compared to the setup here. I mean the first test to do is a simple dd to the device to see how fast the drive can handle a binary copy. And with dd there is no “filesystem” involved in the loop.

Let me add my suspicion regarding gigabit NAT between the LAN and WAN interfaces, most routers I have tested do not handle properly gigabit speeds without some ugly hacks that openwrt devs refuses to integrate because they are too specific and unmaintanable. Last one I tested could barely do 200Mbits with openwrt without resorting to those ugly hacks. I guess by reading this I was right:

@zoobab http://www.tuxera.com/products/tuxera-ntfs-embedded/ is as I mentioned something that Asus uses on their high-end models. You’d be surprised at how much of a difference it can make, although their stated 1000% improvement is maybe a bit extreme. SAMBA seems to be something of a bottle neck as well, as it tends to be compiled for the platform and this is clearly not always done properly, so you end up getting 30-40MB/s over USB 3.0 if you’re lucky, even though if you run FTP you can hit 80-90MB/s on the same router. Of course, if the router hardware is too weak and… Read more »

I’d rather have OmniOS, SmartOS (both Illumos based) or VyOS on this.