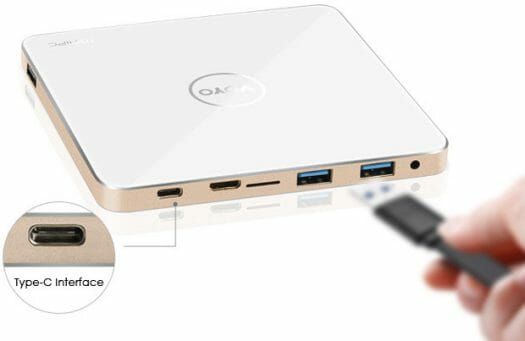 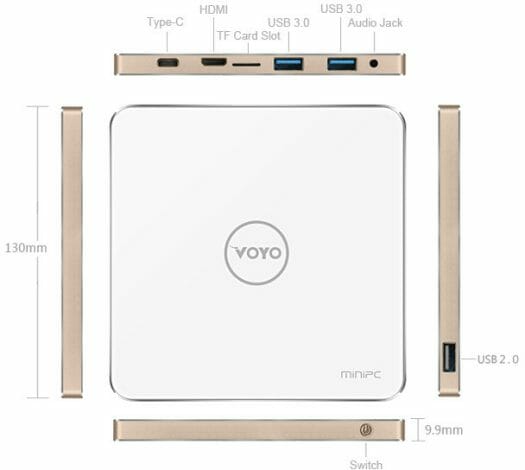 The mini PC runs Windows 10, most probably not activated for the model sold now. The same “armored” glass found on Voyo V2 is used, so it will also be a pain to open it, but that’s something most people won’t need to do. Voyo V2 often had a manufacturing defect with the battery wire soldering, but since there’s no battery in Voyo V3, this should not be an issue. Some Chinese websites claim the 128GB storage is a SATA3 SSD, while other simply refer to 128GB “ROM”, but it’s likely a soldered eMMC flash.

Contrary to the Zotac device, we already have some price information, as it is sold for 1399 CNY ($212) in China, and $235.51 with free worldwide shipping on EverBuying. I could not find it listed on any other English websites at this stage. [Update: It’s also listed on GeekBuying, but the company told me that “The factory haven’t confirmed the shipping date, So it’s not READY FOR SHIP. “] [Update 2: Listed on GearBest for $211.99 with coupon GBV3]

Thanks to godmd5 for the tip!

Finally, 4GB RAM and good amount of storage.
Can this thing run Linux?

@klassiker
I understand you can get type C ports limited to USB 2.0, so it does not say anything about the USB version.

I doubt that also USB and Displayport will be available on the Type-C port. But if so you could power it through new displays like the recently announced Acer H7 or Lenovo ThinkVision X (while the displays will be fed with the monitor signals through the same cable)

Very nice…for the slim boby and finally 4 GB Ram .
Interested to see the BIOS, if capable to boot-up other distro from USB port.

@Jibril
It’s UEFI, just do a web search for »cherry trail uefi linux x7« to get an idea what to expect.

No Ethernet? I think geekbuying list it in the spec but seems like a mistake as there is no physical port. Such a shame otherwise would have snapped this up.

Geekbuying claims they can do 4K. But that probably means 4K30p, right? How about 4k60p?

@Someone from the other side
Yes, if I remember correctly they are limited to HDMI 1.4 so 4K @ 30Hz.

Actually, googling suggests that the 8700 has HDMI 2.0 but I just figured that 75″ HDMI 2.0 TVs are still extremely costly (more so than I thought, turns out the halfwaz affordable ones are all HDMI 1.4) so I’ll keep waiting for the 4k upgrade

why you need hdmi2 for 4k with this computer ? if you want to play videos? they are mostly 30 fps anyway

@Jean-Luc Aufranc (CNXSoft)
Your coupon is not working!

@Poor Paki
Well it’s working in some ways, it’s just increasing the price to $240 :). I’ve asked GearBest if they have one that actually offers a discount.

and if you use graphics crashes too that part may be useful:

In the default configuration, the DTS feature for thermal protection is disabled. This is most likely to be the reason for crashes encountered by other reviewers when benchmarking the Voyo V3. In any case, the default option was altered, as we didn’t want to take the risk with DTS being disabled – particularly since we have thermal stress testing as part of our evaluation.

Hi, Ive opened my Voyo V3 many times, contrary to most of the Take apart web sites, you do not have to remove the glass to disassembled the unit. the screws for the clamshell case are underneath and the unit comes apart easily. The 128GB SSD inside the Voyo V3 is in fact an SATA-M configuration, the mainboard has a SATA-M connector on one edge, and the SSD is fastened with screws on the end of the SSD. The SSD is removable and I have mounted an SATA-M adaptor and installed a Regular SATA2 SSD inside a custom 2din case… Read more »