Rockchip RK3288 was the first SoC from the company that was supposed to support HDMI 2.0 and 4K 10-bit HEVC, but the HDMI implementation was not perfect since it did not support YUV420 colorspace available on cheaper 4K television like mine (LG 42UB820T), and so I’m limited to 4K @ 30 Hz on RK3288, Rorkchip RK3368 fixed that, but the low cost processor does not support 10-bit HEVC. Rockchip is about to launch two new processor that should bring both features to the low end and high end of the market with RK3229 quad core Cortex A7 processor, and RK3399 hexa core Cortex A72/A53 processor. 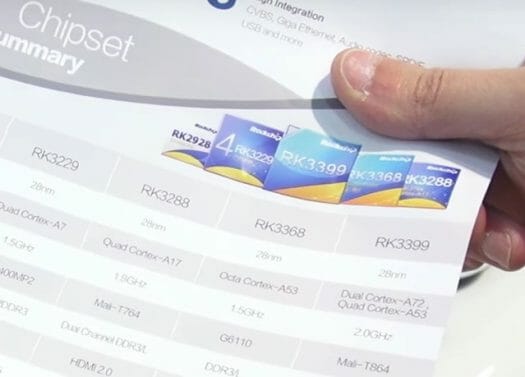 The processor also supports BT.2020 to Rec.709/Rec.601 conversion, and is pin-to-pin compatible with Rockchip RK3128. Boot time is about half of the RK3128 with the company claiming a 12 seconds boot time, and they also claim a smaller delay to start playing high bitrate videos compared to S905 and 3798M. One downside is that it only support Android 4.4, and there’s no Android 5.1 Lollipop or Android 6.0 Marshmallow SDK.

Information is limited for now, but we can already find some RK3229 TV boxes listed on Alibaba such as Vplus M9 selling for $25 in quantities, but I’m not sure information and pricing can be trusted on this page, as they mention both H.265 and VP9 4K video decoding, and this would be a big omission in Rockchip product table that I found on a NotebookItalia video filmed at CES 2016.

Rockchip RK3399 is particularly interesting as it is the first high-performance 64-bit ARM SoC announced by one of the three main Chinese TV Box SoC manufacturers: Amlogic, Rockchip and Allwinner.

RK3399 seems very promising, but it’s a tablet SoC I think, it could slide into some smartboxes but the Rockchip video decoders never been among the bests, besides it’s not open source I think

tablet soc and in my experience rockchip is not that good with power efficiency unfortunately. rockchip tablets battery life doesn’t last long.

Past rockchip SoCs are reported to:
– be power hungry
– run hot
– suck at video processing.

That’s not all to be fast. Has to be reliable too.
I’m curious how’s against future AMlogic SoC especially with VP9 and HVEC.

Thanks for the info!

Availability: Q4 2015 🙂 and I’ve been told product could become available as soon as next week (pre-order).

Bogolisk :
Past rockchip SoCs are reported to:
– be power hungry
– run hot
– suck at video processing.
Anything changed since?

a) Not that power hungry…i think there are even some energy consumption tests here on cnx that show that RK is doing fine since RK3288 i think
b) No, at least not as hot as Allwinner (From A80 to the new ones) and Amlogic…i had a minix 8 that thing could get so hot i was afraid it would burn.
c) Yes, true that…but mostly cause rockchip software/sdk sucks

Amazing, they improved the DDR controller a lot to support 4K video.

I think it’s OK price-wise, but have to see video playback performance.

Any benchmarks between the different Rockchips (actual or projected)?

@Gabe
This must be fake, RK3229 is not stated on RK webiste yet:
http://www.rock-chips.com/a/en/products/index.html

They’ve also tested it, but it could be they have some issues, and delayed it. CNY is here as well, as if nobody has received any yet, that means it will probably ship at the end of the month.

Geekbuying seems to be selling them, a guy even wrote something about it on geekbuying.

Open Source? -You must be kinding. I contacted Ugoos (manufacturer of the RK3288 powered UT3S) and asked for the kernel source in order to compile-in new drivers. And they just plain refused. Yet they have the cheek to proudly say ‘Ubuntu’ all over their ads.

I believe that the Rk3229 is also software compatible with the RK3128 except in the video decode area. There is a lot of RK3128 source code on the t-firefly website. Full source for kernel, ubuntu and android. I’ve compiled and used a lot of it and it all works. RK3288 source is there too.

When will the Tier 2/3 SOC chip makers figure out that keeping source secret and not providing public read-only git servers is hurting them, not helping. Look at the Tier 1 SOC makers – almost all of their stuff is fully open.

There are posts now saying RK3399 linux is open source?, posts on freaktab and elezine from days back and chinagadget . All refer to wikidot and github.

This could make a box like “SCISHION V88 TV Box Player Rockchip 3229 Quad Core” an interesting Linux offering for just $25.