While we have recently started to see low Intel Atom x5 “Cherry Trail” development boards such as UP Board and LattePanda, we have not really seen any Intel Atom Z3735F/G “Bay Trail” boards despite their popularity in mini PCs and TV sticks. JAGUAR ELECTRONIC H.K. aims to fill that avoid with their JaguarBoard single board computer powered by an Intel Atom Z3735G processor coupled with 16GB flash and 1GB RAM. 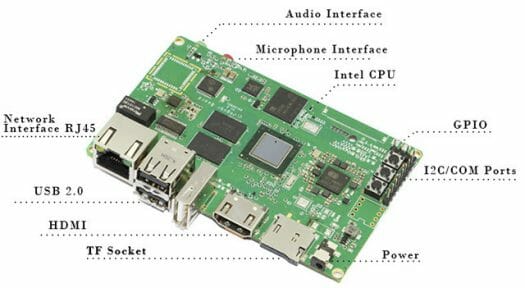 Intel Atom Z3735G is basically the same as Z3735F expect it only supports 1GB RAM at a lower bandwidth.

The board is said to support a wide range of operating systems including 64-bit Linux distributions such as Ubuntu 12.02 to 15.04, Debian 8.0 or 8.1, LinuxMint 16 to 17.2, Fedora server 21 & 22, OpenSUSE 13.1 and 13.2, as well as the 32-bit versions of Windows 8.1 and 10. The 16GB internal storage would certainly limit what you can do in Windows. All these Linux distributions are unlikely to be working 100% out of the box, e.g HDMI audio, and all I can see on the download page are Windows drivers, and UEFI “BIOS” for Linux and Windows. The company has setup a Wiki in English and Chinese,  as well as a support forum.

The project is currently listed on Kickstarter with about 3 days to go, with the company having raised close to $20,000, and easily exceeded their lowly $3,000 target. $45 and $50 Early bird rewards are all gone, but you can still pledge $65 to get a JaguarBoard with a 110/220V power supply, a USB hub, and a 16GB micro SD card. A free WiFi dongle will be added if the campaign raises over $30,000. Shipping is free to the US, and $15 to the rest of the world. [Update: The retail price should be $79 after the crowdfunding campaign]

This isn’t of any interest to me. If I need a board with GPIOs and such why not get an ARM one ?

A shame not to expose more IOs, as the datasheet seems to say that there are 144 of those:

Not sure why anyone would get this over the LattePanda https://www.kickstarter.com/projects/139108638/lattepanda-a-45-win10-computer-for-everything

Still a ton of questions why Intel leave this market sector for ARM.

And try to catch up later but too late to achieve like Edison/Galileo platform vs Raspberry Pi.

Or the only way to go for embedded devices should be ARM.

Just trying to build kernel for BrayTrail and found a lot of pain starting from EFI issue, ACPI dsdt and finally a rootfs with xorg driver…

But very surprised, no more pain to try using core i5 as target!

Why the Atom z3735g? Atom x5/x7 are already available and they are way better (they support Turboboost)