So far most of the Android receiver with digital TV tuners I covered on CNX Software are based on Amlogic processor, with a few exceptions such as Infomir MAG277 based on STMicro STiH301 processor. There’s now another choice with U4 Quad Hybrid, an Android 4.4 TV box powered by Hisilicon Hi3796M quad core Cortex A7 processor that supports DVB-S2, DVB-T2/C, and ATSC tuners. 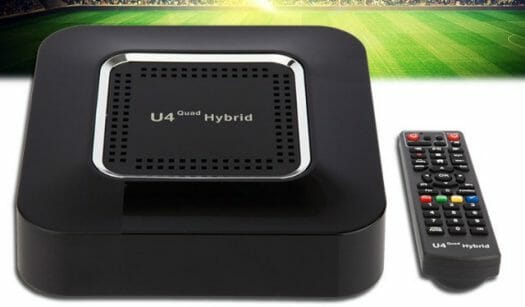 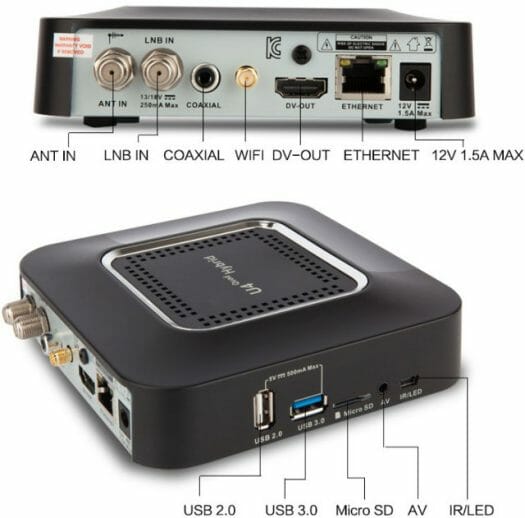 The device runs Android 4.4.2 with “eOn center UI” and Kodi 15.2. The specs also mention a video player capable of handling HLS/TS over UDP and RTP/RTSP/HTSP video player, a Linux front end for Live video, as well as PVR/Time-shifting support. Only FAT32 and NTFS (read-only) file systems are supported, which could be an issue for longer movies. Hopefully the latter is a mistake in the specs.

Shenzhen Vivant Technology, the manufacturer, is selling the set-top box on Aliexpress for $119.99 including shipping by DHL [Update: Another link has it for $106.69 by China Post]. Accessories are not listed on the product page, but I should receive a sample, so I’ll check this out soon…

Test, whether it can act as streaming server for it’s tuners, too! (tvheadend)

Btw it is a bit unclear what tuners are supported and how to select one. Also if this is single tuner then why is there both a terr and sat input on the box.

Also a bit of a pity that this is Android 4.4
(and dhl shipping means guaranteed taxes when importing in EU)

effectively, it supports TVHEADEND, and the software side seems much better rich than the competition, especially the native support for TVheadend, but the Cortex A7 and the android kitkat are a bit outdated and a deal breakers

Expensive device with only 8bit hevc support. What about cccam and oscam? Netflix only in SD?

@Techy
for a 60 USD free shipping it could be a very nice device, UI and TVheadend makes a plus value

It is nice & easy control UI for remote-con and include in TVHeadend.

It has nick name that is Grandparents settop. ^^

It will be insert IPTV & CCTV address in tvheadend index. and watch IPTV & CCTV.
but it can not support of recording.

I want to recommend a product to you. ^^

PCB is designed in korea.

@EddyLab
very nice, I just watch the review, the UI is excellent but the SoC could be better
do you intented to support OPENELEC with your device

the UI seems very nice and easy to use but a little bit slow
https://www.youtube.com/watch?v=pOxNKKMsQ5c

@taki
is there anyway to make the MPEG2 “Software” decoding instead of “HW” on amlogic, ffmpeg mpeg2 decoder could easily handle it on cortex A7 or above

Natsu can you say hisilicone hi3796m no hw decode mpeg2. I know ffmpeg sw decoding. (Amlogic cpu much more powerfull than other. Only video pictures qualiy not good for sd contents). can do you can test 10 bit h265 dvb channels
Other question.
Hisilicone uses special kodi or official kodi. Official kodi dont support hi android library?
Do kernel sources and tuner driver puplic for all people.

@taki
sorry taki I don’t have the device, EddyLab does I suppose, but it seems that hisilicone has a closed source kernel and drivers, anyway EddyLab could shades more light on that matter

@Tachy
Original firmware have OSCAM on it (Korean version of firmware did drop that feature).

BTW,
Over a month I did test this device, it is really awesome.
One of Korean user made some reviews for this device (of course it was Korean). So I will try to translate that to…

Am I the only one that has noticed that every new Kodi build has the audio/visual sync bug when installed on any Android box? I also have a Windows 10 box and the Kodi version works fine but the same build for Android will not sync audio/visual properly.

@taki It is support of MPEG2 by themself, and native Kodi 16 RC support to them. hisilicon-hi3798c-v200, it is very nice full UHD HW spec, but very very expensive price. http://androidtvbox.eu/himedia-q10-next-gen-tv-box-powered-by-hisilicon-hi3798c-v200-coming-soon/?platform=hootsuite In korea, already started of Korea Terrestrial UHD Broadcasting experiments – 4 major Terrestrial broadcast. I also have 3 kind of UHDTV. I don’t konw, why are you need hisilicon-hi3798c-v200 settop ? ^^ Need to watch of neflix of Ultra 4K UHD ? I do not recommend of that video quality to you. I’ll make review of U4 PVR settop today. @NIPSZX I did not heard about audio/visual sync… Read more »

I cannot find this device on list of Dolby Digital and to watch HD DVB-S2 channels need to have AC3 legal license for Europe and USA. They maybe use some sw hack? HiSilicon dont support hardware decoding natively in Kodi which is bad bad thing.

It is not include of Dolby logo in outbox.

@Jean-Luc Aufranc (CNXSoft)
did you come across linux support for this box (or any of the Hisilicon socs), i’ve looked a bit and found nothing.

@mdel
I’ve never seen Linux on Hisilicon boxes. However, Hisilicon Hikey board does support Linux, but that’s another SoC…

@Jean-Luc Aufranc (CNXSoft) what’s the hw video decoding performance in kodi on that hisilicon android ? I’ve been testing that on my beelink h3 soc with android 4.4.2 with kodi 16 from the playstore, and cpu load is pretty high (50-60%, h264 1080p ac3), it shows amc-h264 hw codec, the origial kodi 14 had a different codec (aw-h264 ?) and i believe had less cpu load so it may have been a custom version for the h3 soc. I’m quite confused as to what hw video decoding really means on android, from what i read, the player can show a… Read more »

How do you install oscam?

I’m trying to find out where to buy this receiver in Canada or the US.
Thanks
BJ

Please let me know manufacturer of STB in India.thanks