Last year the FCC rules issues new rules that would prevent installing OpenWRT, DDWRT, or other firmware, but it went viral, and finally the commission launched a consultation with the community which ended by the FCC issued a statement “Clearing the Air on Wi-Fi Software Updates” last November, making the rules more accurate saying that the rules were now “narrowly-focused on modifications that would take a device out of compliance”. 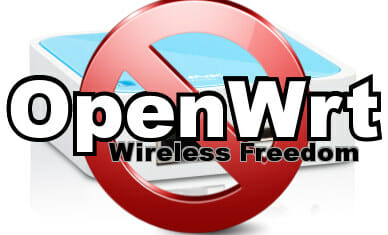 However, one person named Adam recently tried to downgrade his firmware on a TP-LINK router, and the conversion now published on BattleMesh mailing list, makes it clear that the battle for “firmware freedom” may not be over:

Adam: downgrading does not work

I get an 18005 error upon attempting to downgrade. I want to know if this is because of the FCC’s rules regarding broadcast strength and DFS control. Has TP-Link complied with these rules and locked down its firmware and if so, for what models I need to know if I am going to continue purchasing devices from you.

Adam: Wow. Thank you. I’m impressed with your digging And this limitation is due to FCC rule clarifications in 2015? And not some other reason

Camille09: Right, due to FCC

Adam: Thank you very much. Can you explain why the WDR3600 appears to be locked down? Is it possible that your list is not totally updated? And do you have a method or avenue that people who wish to use other firmware have?

Camille09: Yes, wdr3600 as dual band wifi router, is also locked down. And there is no other way to use other firmware. Sorry for that Adam

Adam: Thank you very much, Camille. You’ve been very helpful

So basically, if you purchase any new TP-LINK router, and probably from any company that sells to the US, it will be locked down now or in the near future, as the companies did not bother to have separate upgradeable and FCC locked-down firmware upgrade process, and AFAIK there’s no obvious way to change the firmware. Also, if you update your old router with a new firmware it may be locked down. On the other hand, some people have been buying a few TP-LINK routers recently, and had no such issues, possibly because they were loaded with an older unlocked firmware. There are many discussions about that very issue on BattleMesh mailing list, and while I have not gone through them all, one of the post discusses an action plan to fix *WRT and FCC. All of this is very much work in progress, so we’ll have to see how it ends up.

You can also visit savewifi.org to find out more, and possibly help get this getting resolved with the FCC.

FCC suck a lot! No problem 15$ OrangePi with usb wireless have a removable sdcard and support partialy openwrt…
More powerfull NAS router with wireless you like without giving job to FCC beach players :/
Economical suicide corporation!!

@Bob
I’m unclear if it is the FCC fault, although indirectly yes, it is… as it could be seen an “unintended consequence” of the rule. They’ve made the rules more focused, and in theory the manufacturers should have given the users a way to upgrade the firmware without altering the parts subject to that new FCC rule (broadcast strength and DFS control). But in practice, they’ve just locked down the complete firmware.

Anon7477
Someone from the other side

How, please link to firmware?

The EU has passed similar regulation to be implemented by the Member States, it is in the process of being ratified in the different countries now, and very few people are doing something about it. In any case, most manufacturers will end up not modifying the US firmware and apply that practice for all their devices worldwide.

@Jean-Luc Aufranc (CNXSoft)
Yes it’s an major issue to block hardware with an proprietary software.
Why they didn’t propose a novel protocol for handle interference in order to limit tx power when necesary.
Radars need empty band space, why not! Why don’t they ask before in wireless protocol and make penalities law for non respect of rules? They want to control firmware, communication, spy with backdoor…5ghz radars isn’t the real deal.
they can make rules on 5ghz band if they want, but choose to block firmware

Well even if many models get locked down there’s still China only models that will probably have no such limitations. At least for now, maybe the Chinese will also get the idea to implement some restrictions.

Considering that many Wi-Fi chipsets don’t allow for the TX power to be modified, it seems like this is a storm in a tea cup. As far as I’m aware, QCA doesn’t have a setting in their more recent Wi-Fi chips, as this is done at the time of calibration during the manufacturing. It’s also worth pointing out that Wi-Fi routers are in fact individually calibrated during production to provide the (hopefully) best possible signal strength. It simply seems like TP-Link was lazy and locked down their firmwares. Note that most (90%+?) consumer routers don’t support DFS, as it’s complicated… Read more »

I always hated TP-Link because of their performance and other technical issues. I always had some or the other problems with their products so from now on i have switched to Tenda which is much better than TP-Link.

TPLink FAQ explains why they have to do it: http://www.tp-link.us/faq-1058.html, but they say it’s limited to the US.
I wonder how they manage this since they provide download links for the routers’ firmware.

The downloads are encrypted and signed via a private keys. The update command in the router won’t do the update unless the file decrypts correctly.

Apparently they are not using TPM yet to do a signed boot. Once it is doing a signed boot there are no more holes left to change the firmware.

Not very nice to use the freely-given hard work of Linux developers, then lock it down

In case, people are still wondering some folks at DD-WRT forums figured out a way to flash TP-Link WR710N that was locked by Part 15 of FCC Rules https://www.dd-wrt.com/phpBB2/viewtopic.php?t=179414&postdays=0&postorder=asc&start
Now to find out if it is possible to revert it from DD-WRT down to pre-FCC block firmware? Would that even make sense?