We already knew that GPD HK was working on a Windows 10 handheld gaming console powered by an Intel Atom x5-Z8500 Cherry Trail processor, and the company has now decided to launch what they now call “GPD Win” on Indiegogo for $299, and advertise it as a “5.5” Game Handheld Laptop”. 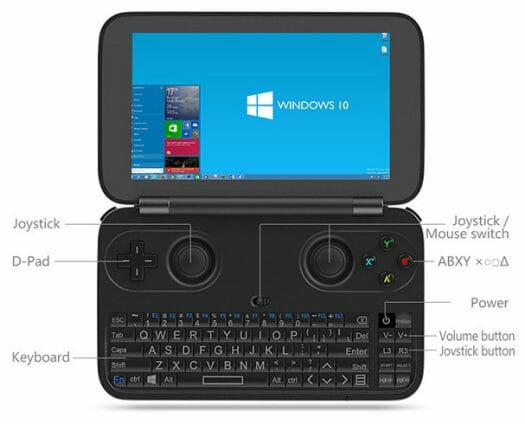 The game console “laptop” will run Windows 10 Home. The company claims to support PC games, flash games, Xbox games, Stream games, Emulator games (PS1, PSP, Arcade…) and more, but they don’t say if all of that is pre-installed, and it’s something you’d have to do yourself. There’s no video demo showing the capabilities of the device, but GPD is quite a well-known company for portable gaming console, so I assume the risks are limited. 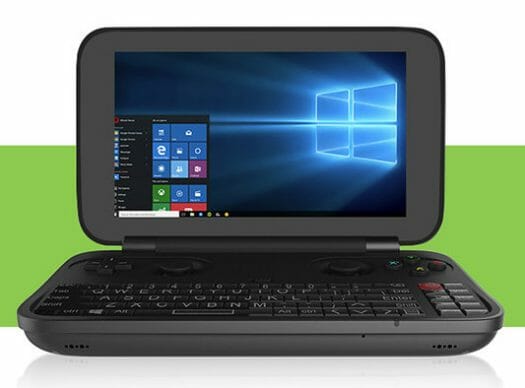 You can pledge $299 on Indiegogo to hopefully receive GPD Win in October 2016. Worldwide shipping is included in the price. We are being told that retail price would be $499 after the crowdfunding campaign…

Thanks to Deen0X for the tip.

very good product with only the pad or keyboard. But without display, all by wireless display (widi), removable the LCD, And I buy this product, It is very bad with 5,5″ screen.

For reference Half Life 2 playing in MiPad 2 with the same Intel Atom x5-Z8500 processor: https://www.youtube.com/watch?v=6OmG95WFCfw

It does slightly better than I’d thought it would- but it’s stuttering in that video. Like I said over on G+- it’s of limited use as a Windows 10 device; and it’s certainly not worth the full retail price.

Oh how I wish the terrible mini HDMI port would go and die. The connector is far to fragile compared to micro HDMI and it’s not even that much smaller than a full-size HDMI port…

This is a terrible GPU and terrible gaming OS away from being great. Put a google play certified Remix OS on this with a decent CPU/GPU like the Exynos 8890 or Snapdragon 820 and this is amazing and worth the Retail Price. Put in a Exynos 7420 and Remix or Android and it is worth the Indigo price. Even the AmLogic S912 or even the Rockchip RK3288 would be an upgrade over the GPU on this. Is the Intel Atom x5-Z8500 even capable of decoding HEVC or VP9 at any bitrate for 4k or even 1080. This could be good… Read more »

In fairness the OS isn’t a terrible gaming OS but is not as good as Android but I suppose you could install Steam and run in big screen mode (Not sure how touch friendly Steam or Steam OS is) but is still a terrible GPU away from being anything to do with the word Gaming.

Hello,This is kendy from GPD company.Thanks so much for your kind concerns and support for us!!We are a company is specialized in the design and manufacture of video games consoles.And we all have a dream to make a portable handheld PC/Gaming consoles based on Windows system.so we make GPD WIN.Please don’t worry.No matter the found raise is succeed or not.we will be surely complete this perfect device!!!Of cause,we all hope you can help us to make this campaign success.So we will have more confidence for GPD WIN!!!Any concerns,just be free to let me know!!With many thanks again!!!

The main concern for now is something that many people ask to you last days… L3 and R3 button positions (and Select/start too) as you know, people want to use this device more focussed for gaming device instead as standard portable computer, then is so important for users to fix the keyboard layout as main concern. Personally, and as i commented man times, i really think a device based on current GPD-XD mold with intel SoC (even with baytrail) will be enough for introduce this kind of product on the market, and with this GPD can keep the low-cost profile,… Read more »

🙁 cannot play world of tanks with that weak processor.

tablet and tv box will never manage to follow minimum spec requirement to play descent pc games on both gpu and cpu, too sad that we are stuck to use it as media player.

even 4gb 667mhz ddr2 memory coupled with a core2duo 3ghz and a 1000mhz gpu video card is able to play almost ‘all games’ of today, seem like intel will never provide descent soc and gpu to follow the flow..

check these videos. all of them are running windows games on a baytrail device (that is less powerful that GPD-Win)
(there is a playlist: https://goo.gl/LHoYrq)

i don´t know if world of tanks can be playable on these kind of processors, but there are a lot of other games that you can.

@Marius Cirsta
yes, it can. i will capture some gameplay of crysis (1 and 2… i doubt 3 can be playable, but i will try too)

I’m not liking that left shifted keyboard layout. I’d imagine it’d be awkward to type on. At least when you’re trying to hit keys with your right thumb.

GPD already make an RK 3288 clamshell handheld, the XD which this Windows version is based on. In fact there are already plenty of Android handhelds, I own quite a few of them and they are all inferior to even a Bay Trail tablet for gaming. Windows has an immensely superior software base which makes Android look a little silly with it’s novelty phone games.

@Steve WRONG, i have Bay Trail tablet and it is useless for gaming except lexica. Matter as fact I have to use Chrome so it will resize for browsing and be able to use keyboard without having to open up keyboard manually every time. It is so useless it sits there in my house. Even when the android device run out of power my kids will not pick up the windows tablet. And yes i own many of the android gaming machines, my JXD S602 is more useful than the windows device. Windows overpriced games do decent (not good) on… Read more »

@birdog
Well, i don´t know what is lexica, but for normal everyday playing, i’m using a baytrail tablet teclast x89 + ipega 9023, and i’m so happy with the results.
As i commented on previous post, there are lot of samples that i’m playing: Deus Ex, Batman Arkham City, Darksiders 1 and 2, Dmc, Devil May Cry 4, Alice Madness Return, Assassin’s Creed, Blades of Time, Burnout Paradise, Street Fighter X Tekken, Sleeping Dogs, etc, etc. (PS3/X360 multi generation aprox)
for some examples of gameplay, there is a playlist that i captured on my device
https://www.youtube.com/watch?v=Uw9EF8LNKQM&list=PLXPqQ3mj-_IcP0aevb4JoI_tqYV-mLqSi

@Deen0X
That is good I hope you enjoy the GPD Win if you get one. I am going to get Shield Portable or the GPD XD and probably the Dragonbox Pyra when it finally comes out.

The GPD XD 2 will have a flip around screen for use as a tablet and an add-on keyboard. If this is true and this has a great GPU this is a MUST buy. I pray to God they don’t put an Intel chip in this, or at least if the do put in a dedicated GPU. I think the Samsung Exynos 7870 would be perfect.

@birdog this video are only design concepts i posted time ago as suggestions. current GPD-XD2 will be ARM based soc, with 360º screen and no keyboard. i see many people prefer ARM soc based for this device, but i lost my interest when know that will be ARM based. currently, i don´t konw why people want more power on ARM gaming device. GPD-XD have enough power for playing everything, and more power will not make a difference really (unless you get same or more power than X1 SoC for running dolphin) question: Why you people want more power (CPU/GPU) on… Read more »

Only thing that worries me is the performance throttling from the Atom x5-Z8500. It can overheat easily under CPU stress from gaming and could make it uncomfortable to hold. I have the Kangaroo PC (this should have similar specs to the GPD WIN, except it has 2 GB of RAM) and it suffers performance due to overheating issues. I hope GPD WIN has a good standard when it comes to support. I had terrible experiences when I fiddle around with Chinese based “generic” laptop PCs like… – “Genuine” Windows 10 that is actually a Chinese version and not a US… Read more »

@Jean-Luc Aufranc (CNXSoft)
curiousily, this device is announced to be launched on October…

as i know, on July most probably will be ready the first batch of prototypes for testing…

My big question and concern is:

Will there be support for Windows 7 64bit?

@Honasvocas
The processor used does not support Windows 7.

Is it possible to boot linux distro from usb stick to ram in GPD win ?

Really cool idea. At Geekbuying they go for $330.