Intel announced five new Computer Sticks at the beginning of the year, and so far 4 have been launched, and the Intel Core m3 have been benchmarked showing about to double the performance compared to the Cherry Trail versions, but the most powerful model based on Core m5 had yet to be launched. The news is that if you have some spare cash, you can now pre-order Intel Compute Stick STK2mv64CC based on Core m5-6Y57 vPro processor for $485 on Amazon US with shipping scheduled for May 12, 2016. 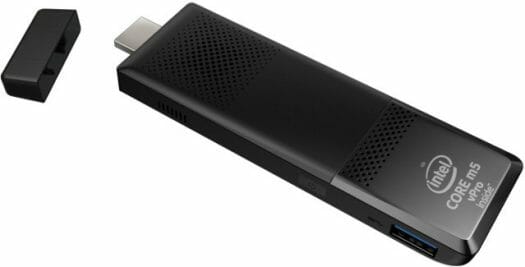 STK2mv64CC is sold with operating system, and ships with the 5V/4A power supply (which also includes 2x USB 3.0 ports), and an HDMI extension cable. Performance appears to be  only a little better compared to Core m3-6Y30 used in STK2M3W64CC (~$400 with Windows 10, ~$330 without), but the Core m5 processor supports Intel Vpro technology which makes it more suitable for the enterprise.

Thanks to Raymond for the tip.

Man, you can buy a whole laptop with same/better specs for around the same price.

Yes but the laptop is a lot bigger and I guess uses more watts of power then the sticks.

@Raymond Day
I take it you’re aware that Intel’s list prices and what it actually sell things for to its partners are two very different things? In this case, as it’s their product, they can technically charge whatever they feel for it. Never read too much into the list prices, they’re just a point of reference for anything that’s not a retail chip.

I always will think that those m3 / m5 intel cpu are nonsense. As here stated, with 500$ you can buy a far better laptop. And if you need it to be this small, there is plenty of cherry trail sticks around 100$ which surely will fit your needs, because if you plan on buying a pc like this you don’t plan to play new videogames at 1080 or edit huge video, you want it for a simple desk and daily tasks, for you or your workers. I don’t really find any use on spending that much unless you’re rich… Read more »