Doogee Smart Cube P1 is an Android 4.4 projector that looks somewhat like a Rubik’s cube, powered by Amlogic S805 processor and featuring Texas Instruments DLP solution. GearBest sent me a sample for review, and today, I’ll start by checking the device itself, before writing a review in a few days. 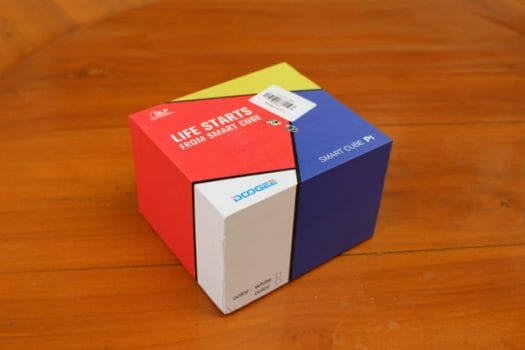 The mini projector only ships with a 5V/2A power supply / charger, and its USB cable. So your smartphone will have to be the remote control, unless you connect an RF dongle for your air mouse or wireless keyboard. There’s also no user’s manual either. Not that I normally read them, but a description of the features would have still been nice.

Anyway, it’s easy enough to find out. The projector is on one side, the blue and yellow side features with a USB port and reset pinhole, and the red and white side, the micro USB port for charging, the power button, and the focus wheel button.

I did an attempt to open it but only went far enough to see the fan and heatsink.

I also could not resist to try it out, before completing this post. I started by adding my air mouse RF dongle, connecting the power, and pressing the power button a few seconds to turn it on. I quickly realized the power cable was quite short, but that the device also had a built-in battery, so it’s much more convenient to place anywhere you want. Focus is also quite easy to get, and I was pleased with the brightness.

I started in a room placing the projector on a cabinet, before moving outdoor to get a bigger screen.

The next picture is taken in the same location, but with the flash to show the projector, and the screen is still visible.

I also quickly tried further to make a 3 to 4 meters display and it was not too bad either.

I’d like to thank GearBest for providing the projector, and if you are interested in such device, you could consider purchasing from them for $168.99 including shipping ($4 cheaper with GBP1 coupon). It’s not sold on many sites, and the only other option I could find was Aliexpress.

Is the play store working on yours? I get weird errors when trying to install.

@Gadget Friendly
After struggling setting up WiFi, I managed to login to Google Play. I only tried YouTube, which failed with some error.
Instead, I played some videos in Chrome, and it worked OK.

Bah, hopefully there is a better fw floating around somewhere. With mine, the alignment of the picture is slightly off too which makes me sad but can be fixed by slightly elevating the left side. I really like the concept of this all in one tv box though and the image quality is pretty damned good for something so small.

This could be interesting project to work on 🙂 @cnx, if you’re going to disassemble it, take pictures of pcb, look for uart pinout if exists 🙂 Since there’s no sdcard (S/M8XX and 905 sdcard slots can be used as UART output by using Amlogic’s SDIO debug card) some soldering is needed probably.