Doogee Smart Cube P1 looks like a colorful Android 4.4 TV box powered by an Amlogic quad core processor, but it’s actually an Android DLP projector without other video output ports (no HDMI, no composite) that can also be used to mirror or extent your laptop or smartphone screen. 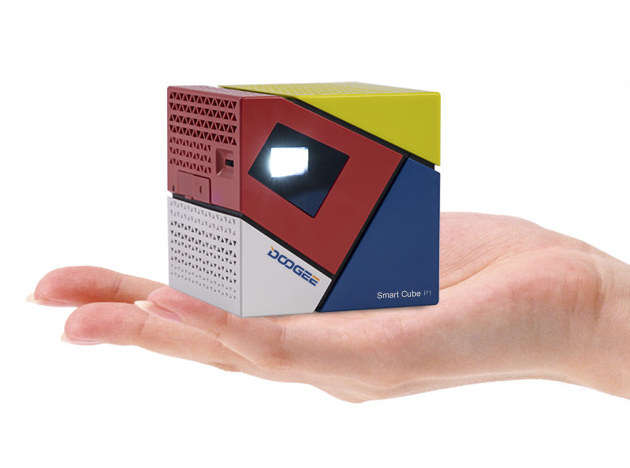 The projector runs Android 4.4 with DLNA, Miracast and Airplay support which allows you to wirelessly stream your audio and video media files from your phone or computer to the projector, or mirror or extended its display.

Gizchina met the company at Mobile World Congress 2016, and tried the features using a Macbook and an iPhone, but it should also work on Windows, Linux, Android, or other systems supporting either Miracast or Airplay.

Doogee P1 is pre-sold on GearBest for $169 with shipping scheduled on April 4, and it should soon become available on other sites too. You can also find more information on the product page.

@Jean-Luc Aufranc (CNXSoft), you should write about the new fork of Kody for Android – SPMC.
You should also test it on the leading Android devices.

Notice that Rockchip devices are not supported any more.

I have found out about this thanks to liliputing.com:
http://liliputing.com/2016/03/kodi-media-center-fork-spmc-for-android-is-back.html

My second post here (#3) awaited moderation, but the first one (#1), and the third one (this post,#4) had not. Why is that?
Is this just random moderation?

@Ron
That’s because when you include two links or more in a comment it will be automatically moderated.

@Jean-Luc Aufranc (CNXSoft)
Thanks, I had skipped this article, because its title is not displayed properly on the main page (I am using Chrome browser).

Nice to see that the developer commented there!

So this cnxsoft site is apparently very popular among developers! Kudos!

@Ron
Not a new fork. SPMC development has been going on for a very long time.
Koying is also a frequent kodi contributor.

@Ron
I’ve checked with Chrome, and it looks OK, except there’s no blank line between the tags from the previous post and the title. Do you see something really odd?

@Stane1983
Hmm, I can see Amlogic S805 is not listed for projector applications @ http://www.amlogic.com/#Application/Projector/index02.html

So Amlogic T826 is actually the most likely candidate.

@Jean-Luc Aufranc (CNXSoft)
It looks nice.
Perhaps GearBest will be kind enough to send you one for a proper review.

@Jean-Luc Aufranc (CNXSoft)
I have uploaded a photo of what I see:
http://s7.postimg.org/tubkednm3/cnxsoft.png

The title of the middle article (between the Linux4.5 article and the K3 Wintel article) is not displayed correctly.

@Jean-Luc Aufranc (CNXSoft)
I saw similar issues too but did not pay much attention to it. I believe Linux 4.5 post preview is generated incorrectly. Checked on Firefox (screenshot:

), looks better but you can see in yellow area that icons (category and tags?) are not displayed correctly.

@Ron
@Stane1983
Thanks for the screenshots. I can see other posts with (too) many tags and categories will generate the same issue.

Can you connect other speakers to this device,its doesn’t seem to audio port. could you Bluetooth connect some on the android interface.