Companies have showcased products letting users watch DVB-T or ISDB-T channels since 2013, with products such as Geniatech WiTV, Tivizen USB dongles, or Geniatech PT115m/PT115e USB DVB-T Sticks. The only problem is that those devices never seem to become available, but I’ve now found that they’ve become easier to purchase since 2014 & 2015, with for example a “DTV Link” WiFi tuner box selling for $45.99 on Buyincoins, and compatible with SianoTV app for Android or iOS. 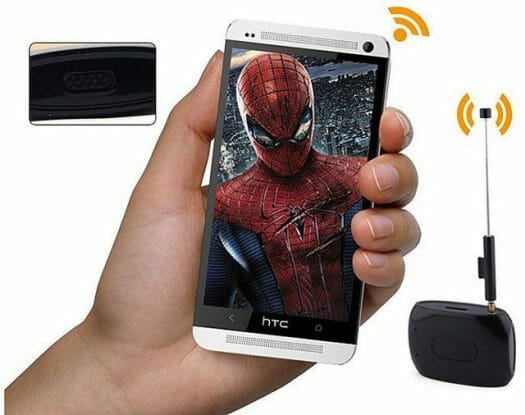 The device ships with a USB Charging Cable, and user’s manual in a bubble bag (no retail package).

The video below shows how it works on another SianoTV compatible device called Meron. But basically the device is a WiFi access point (Meron, password: 12345), and once you’ve connected to it you can scan channels and watch TV with SianoTV app. Bear in mind that since only DVB-T and ISDB-T are supported, only SD resolution is available, no HD.

The device is also found on Aliexpress for as low as around $38 shipped. If you’d rather watch HD channels, I found “Lesee DVB-T2 WiFi box” selling for $68.99 on Aliexpress or $73.99 on eBay. The app for that model is called Lesee DVBT2 WiFi, and you’d be one of the first to try since there are only 1 to 5  installs reported with the app was first released on April 21.

but, DVB-T1 began dying out already

@TC
True, and actually my brother told me they have to change their receiver this year (in France).
That’s why I also mentioned a DVB-T2 model.

Another option is to use TVheadend, but then you need network access (LTE or WiFi) -> http://www.cnx-software.com/2016/03/25/stream-live-tv-to-your-computer-or-smartphone-with-u4-quad-hybrid-kodi-and-tvheadend/

France won’t be going DVB-T2 until 2020, at the earliest, when H.265/HEVC will probably be implemented even if it’s still only 1080p – what Germany is progressively introducing over the next 18 months.
TNT only went H.264/AVC and nearly exclusively HD at the beginning of this month.
DVB-T has quite a few more years left yet in much of Western Europe.

How hard would it be to do the same with an openwrt box on one side, and VLC on the other side?

It would be interesting to see if the box transmits the TS (transport stream) as is (even if it’s encrypted) or if it operates some conversion to get an android-oriented stream (container, transcoding)…

@zoobab
I can see a few people attempted that, but I can’t really see fully documented project.

@OffWorld
Noted. My brother told me the old TNT boxes won’t work anymore this, so I wrongly assumed that they had switched to DVB-T2. Based on your comment, it’s probably because of the move from MPEG-2/MPEG-4 to H.264 then.

With the PCTV Kodi plugin, Broadway TD has been able to stream DVB-T for a while now, although it’s an expensive box. TVHeadend (amongst others) has also allowed you to stream from a server to a client using the Kodi plugin, this can use compatible DVB-T tuners and an arm-based machine, I ran it on my RPi 1 B just fine. I recently bought an openelec box from openelec.tv for ~65 euros on sale. This runs dual DVB-S2 tuners and, again, TVHeadend runs fine for streaming to android devices (I’ve got SD channels streaming to my Moto G 4g phone.)… Read more »

How do they convert the DVT stream to Wifi, if a streaming video server is needed then the WIFI solution can’t be that cheap, very interesting.

…Just did some quick search it turns out it uses MIPS to do that, most like it runs like an openwrt wifi router

Wonder if this work with Tvheadend or other TV streaming servers for Linux?

Seems like the Meron one costs $59, but not sure where it’s sold:
http://yeshgo.com/meron/