Intel has recently announced it would lay off 11% of its workforce, and has now decided to kill plans for Atom Broxton, successor of Intel Cherry Trail processor, as well as low cost SoFia smartphone SoCs. That’s not really surprising as Intel was reported to have very small margins, or even to subsidy, low cost Intel based smartphones, and mini PCs. Rockchip/Intel Sofia SoC has never been popular with only a handful of smartphones and tablets launched in the last year. 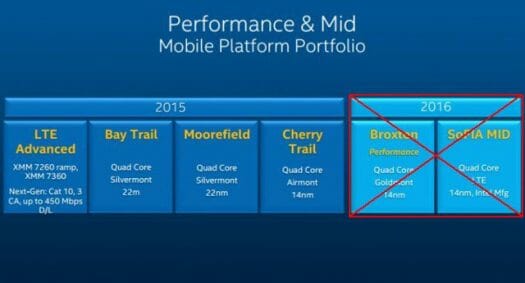 Nevertheless, we’ve had it good with $70 Bay Trail TV sticks, and $85 Cherry Trail mini PCs, and Intel is still manufacturing and selling those parts. But in the future, it might not be possible to buy sub $100 mini PCs or tablets with the latest Intel processors, as the company is now focusing on higher margin processors with Intel Core M and Apollo Lake (succeeding Braswell).

More details and in-depth analysis of the announcement can be found on Liliputing and Anandtech.

thats a shame. I really wanted to upgrade my z3735f with something, that runs windows and can do hevc 10bit and vp9.

Based on the benchmarks I’ve seen ARM new cores (Cortex A-72, Qualcomm Kyro, Samsung Mangoose) are starting to be a big threat even for Intel’s big cores. Since Bay Trail and Cherry Tail barely keep up with Cortex A53, they were starting to look old and totally unimpressive. Also with SOCs like MT8173 and Helio X20 we are starting to see Cortex A72 cores in devices that until a year ago were using either Cortex A53 or Cortex A7. From here I think ARM it’s gonna be a even a tougher nut for Intel to crack, either they will use… Read more »

Isn’t an indication that the Intel strategic agreement with Rockchip is going to an end and the rumors of Allwinner merging with Rockship would be true?

Sad that ARM won’t have any competition.

While Intel’s support for running Linux on their Atom chips is not that great, we did get a Linux supported video card to use. For all its pluses at the processor level, , ARM video support is pathetic to say the least. You can’t blame vendors here, since the video cores are purely ARM.

Also, Atom runs on kernel 4.5, can’t say the same for most arm based SoC’s. Was kinda hoping competition in this space will make ARM up their game.

@@lex
The deal between Intel & Rockchip is dead. It had not worked that well to start with.

I’m sure there would still be tablets / miniPCs / compute sticks with Intel chips – some would be cheap, maybe not as chip as Atoms ones. But in my point of view this is not too critical. The biggest problem with this move is to the rumored Microsoft Surface Phone. There won’t be an x86 smartphone! This was the last hope for Microsoft, and the last hope for a breakthrough smartphone in the saturated market! Windows 10 for Arm is D.O.A. – a total failure, and Snapdragon 830 is not a solution. Apple is the leader of the smartphone… Read more »

@RAF
Pretty much so. Intel successfully cornered themselves redundant in that market segment, even after the multibillion $ subsidies. It’d be curious to see if Intel’s IoT Quark will escape the fate of Broxton & Sofia.

@massimo
I guess they’d still exit, but you’d have to pay significantly more for them for the ones with the newer processors.

This is a problem. Why? Rockchip’s Linux support is nothing. It does not exist. Which means buggy Kodi, Linux and all else. The dev community have been asking for any linux drivers since 3288 and before and they don’t care.

Intel had some support on the otherhand. Rockchip is rockshit on Linux at best.

It would be a shame if Intel scale down their low cost SOC options because if they had one big advantage, they worked so well in terms of media playback. It was refreshing not to have to have countless ARM based Android devices that have so little support and with no release of any Android ROM that actually worked as advertised and only getting close because of independent devs. Intel getting into bed with Rockchip was always going to be a disaster and I’m surprised that the Intel execs didn’t so a little more research to see just how poor… Read more »