When Vocore WiFi module launched in 2014 on Indiegogo, it quickly became popular as at the time it was hard to find cost effective and small WiFi modules with GPIOs, and its compact Ethernet dock solution was also a hit. The developer has now been working on VoCore2 for several months, and recently announced a beta testing program. 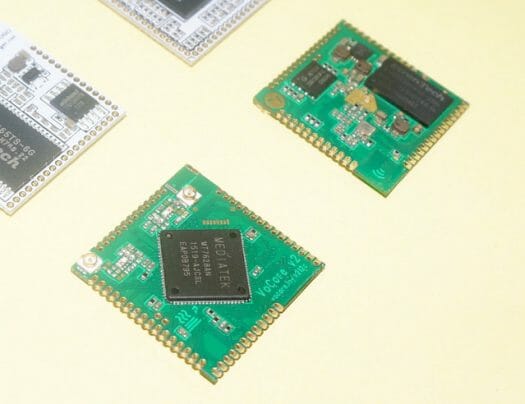 Compare to the first version of VoCore, VoCore2 has a faster processor, more memory, a lower power consumption, a better WiFi signal, and more I/Os. While the software (OpenWrt) will be open source, the hardware won’t be.

VoCore2 is eventually expected to sell for $20 + shipping, For the beta program however, the board is sold for $50 including $20 for DHL shipping, and developers who commit patchsets for VoCore2 to openwrt.org will get a $30 refund. While the hardware is now complete, and OpenWrt runs on the board, there are still many bugs to fix, and the final release is expected in two months time. If you have questions, you can head over VoCore2 forums.

Still waiting for my Vocore 1 🙁

@iamfrankenstein
Vocore was shipped over a year ago to Indiegogo backers. What happened to your package?

@Jean-Luc Aufranc (CNXSoft)
Got send back by customs, reasons only written on the package. Vocore never confirmed he got them back.

@iamfrankenstein
Hi, please contact our [email protected], they will ship you a version 2 🙂 sorry, the post office never returned to us either…

Thank you very much!

i sent you a email. but i havent seen any confirmation of reception. The mail was singed with GPG.
I can’t send emails with the email adres i used on indiegogo but it was with the same domein. ([email protected])