A couple of weeks after unveiling Arduino UNO WiFi with ESP8266 and Atmel AVR, Arduino Srl has introduced Arduino PRIMO board with Nordic Semi nRF52 MCU with Bluetooth Smart and NFC, ESP8266 for WiFi, and STM32 to handle GPIOs and USB UART during May Faire Bay Area 2016. 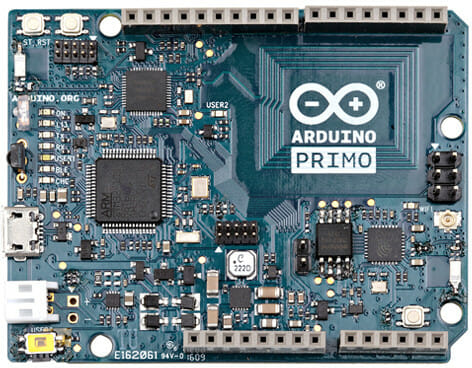 Arduino Primo board (A000135) specifications: 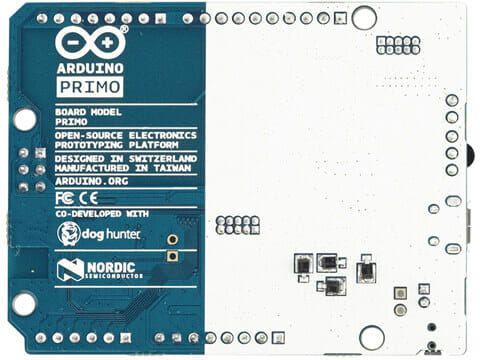 The board is not yet available, and documentation is limited to what’s on the product page. But we can safely assume that the board will be programmable via the Arduino IDE, and Nordic also mentioned that professional developers and Makers will also be able to use any Nordic nRF52 Series-compatible Software Development Kit (SDK) or programming tools, for example to develop IPv6 over Bluetooth low energy applications. 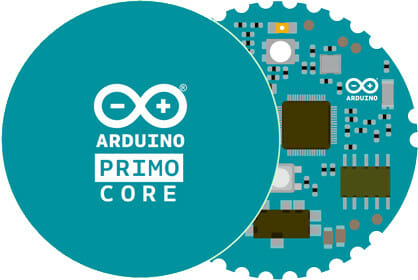 AFAIK, no information about the launch date and pricing have been released so far.

Do you know how many ADC channels and what resolution ?

See you have given the BT Tx power and Rx sensitivity; do you have the same for the WiFi ?

I read the ESP8266 can be quite greedy on current consumption, needing a psu supplying over 1/2 Amp, so how does this board manage a thrifty 87 mA ?

I can see just 1 Antenna socket, is this for the Wifi, BT, or both ?

ESP32 will rule them all.

Well, that’s certainly a kitchen sink approach, isn’t it? A separate 32-bit MCU for each interface, USB, WiFi, and BTLE. Does it also appear to have a battery charger IC? And is that a full bridge rectifier made up of those 8 beefy diodes, can it run off AC? They missed an opportunity to include a fourth MCU to interface between 5V headers and the 3V3 MCUs 🙂 I’m unimpressed with this division of duties between so many MCUs, it seems unnecessary in this case, but I guess that’s always been Dog Hunter (or I guess they’re now named Arduino… Read more »

I could not find the block diagram yesterday, but here it is @

@John S. Thanks for your observations. I see from the since attached block diagram there are 2 32KHz crystals, so what with the hint of integrated battery backup, maybe a RTC is supported ? I seem to remember when reading specs of early standalone ESP8266 that the module had very good Rx Sensitivity – but with a big disadvantage of requiring a very beefy PSU to supply its peak current requirement; but can one assume newer ESP8266’s integrated into a Arduino have the same spec/characteristics as the older standalone versions ? The ESP8266 ADC was single-channel, and low-res. This boards… Read more »

@John S. Since previous reply above, seen the hackerboards article on it, which links to both a zoomable version of above block diagram which appears to confirm the SBC can autoswitch between external and battery power, and to detailed specs for the STML0 & nRF52 SoCs confirming both support RTC and indicating very good low-power modes; but unfortunately no link to detailed spec for the integral ESP8266 chip – the one I read can consume very high peak currents. If I remember rightly I read on various furums that USB WiFi dongles generally consume 40mA – so WHY does the… Read more »