HiSilicon Hi3798C V200 processor is designed for high-end TV boxes and media centers with a a quad core Cortex A53 processor, 4K 10-bit H.265 and VP9 video decoding at 60 fps, built-in SATA, Gigabit Ethernet, USB 3.0, and so on. One of the first model to hit the shelves was Himedia Q10 Pro, but I’ve received an engineering sample for Sunhed S3 based on the processor, so let’s have a closer look starting with the specifications and pictures of the device.

The device runs Android 5.1 with a custom version of Kodi 16.0 and support for local and OTA firmware updates. The product description also mention “pre-installed add-ons such as NAVIX, Genesis, SportsDevil, Phoenix TV, The Mutts Nutts etc”, so if you don’t want those you may probably ask them to remove them.

I’ve received the sample in a “Sunhed” retail package. 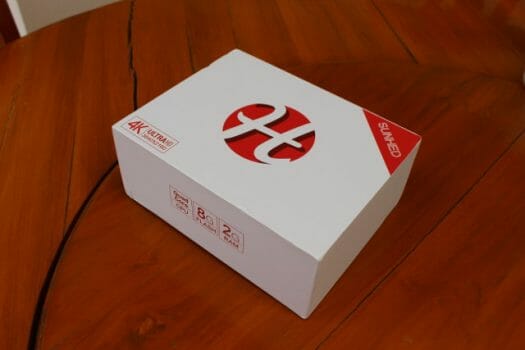 The TV box shipped with a 12V/3A power supply with a US plug adapter, an HDMI cable, an IR remote control with IR learning function requiring two AAA batteries, a SATA cable, and a warranty card.

The enclosure is made of metal, and the device appears to be of decent quality. The top marking also highlight that it support HDR (high dynamic range).

One side features the power switch as well as the SATA port and micro SD clot, while the other comes with the three USB ports and the reset pinhole, and the rear panel include the WiFi antenna, optical and digital S/PDIF, three RCA jacks for composite video and stereo audio, a HDMI port, Gigabit Ethernet and power.

The teardown will be a little peculiar since the company has asked me not to show the board, as it was just an engineering sample, and the final board will look different. Notably the Realtek wireless module will be replaced by an Ampak AP6335 WiFi and Bluetooth module.

I’ve still had a quick look inside. The device is very easy to open as you simply need to loosen the four screws located under the rubber pads. The bottom of the PCB has only passive components, so I’ve loosened four more screws to take a look at the main board. I’ve still take a picture of the area around the SoC to show it’s fairly small and only cooled by a tiny heatsink.

The current board is called SUNHED3798C2 version .1, but the final version of the device will feature a new version of the board. They used 4 Micron DDR3 chip to get 2GB RAM, and an 8GB SKHynix H26M41103HPR eMMC 5.0 flash. Other components include Spansion FL064PIF SPI flash, SG Micro SGM8903 stereo line driver, a USB hub chip, Richtek RT9199 voltage regulator, as well as Realtek RTL8211E and MNC G2401CG for Gigabit Ethernet.

The LCD display is also missing in my sample. I’m not sure I’ll do a full review since my hardware might be quite different from final product, especially with regards to WiFi support. I’m also unclear of the software development stage.

For some reasons, the company has listed Sunhed S3 on Aliexpress, but you can ignore the price ($299), as it will be much lower (I don’t know how much), they currently only want to sell to resellers and OEM for now, and the minimum order quantity is 200 pieces. The company’s website has not been updated and features an older model.

I wonder if anyone will build a cheap SBC around this chipset. It’s great, as it features both usb3 and sata.

coax SPDIF jack should be yellow or black, but not red!

4/8GB RAM would make this much better.