[update: the flash sale is over]

Orange Pi PC is an ARM Linux development board based on Allwinner H3 processor, that is relatively popular thanks to its low price/features ratio, and decent Linux support mostly thanks to the combined work of linux-sunxi and armbian communities. The board normally sells for $15 + shipping on Aliexpress, but GearBest appears to have a promotion for $8.57 shipped. 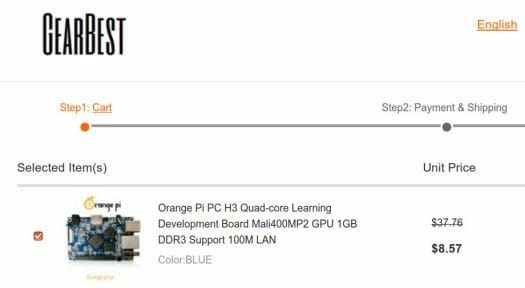 GearBest confirmed it is a “big promotion” lasting as long as there’s stock. The page has been updated and the price is now $8.57 from the China warehouse only.

Thanks to Thomas for the tip.

Just checked, it is now shown as 8.57 on the order page; was tempted to buy one but already have an Orange Pi that is collecting dust due to lack of time.

Thanks for the tip, just ordered one to play with. Now question is when or whether at all it’ll arrive (i don’t have very good experiences with GearBest so far, but this is worth the risk). Price 8.57 was visible immediately on page about Orange Pi, China Warehouse.

@FransM
@Hibiki
I can see the page has slightly evolved since I’ve written about it. The $8.57 is now only for the warehouse in China.

I buy one too. It’s a very good price. I already have another pi pc and i had to pay about 20$.

GearBest has confirmed it’s a promotion, and that price ($8.57) is normal.
It’s only valid as long as stock lasts.

It was nothing but a shameless publicity stunt to attract new users for signup with their personal info. After signup it went back to $19.99.

Flash sale appears to be ended…

Farrukh :
It was nothing but a shameless publicity stunt to attract new users for signup with their personal info. After signup it went back to $19.99.

It is much worse than that…
A colleague have been trying for two hours, tried 4 different cards and only gets:
“Sorry, your card is unable to authorised”
The funny thing is that he tried to buy another item, just to test, and the card was accepted!!

So, I guess that was the way Gearbest inform his clients that the stock is over…
What to think about GearBest ethics???

@JotaMG
I’ve ordered 10 pcs using Webmoney some minutes ago and everything went fine.

I tried to order just now. On the product page the price is $8.54, but when the item is added to the ‘cart’ the price in the shopping cart jumped to $19.99, saying ‘Sorry, flash sale is over’.

You are a magician!
For almost an hour the price has reverted to the regular price when you go to the cart.

Magicans?
No. We are Russians)

I too bought successfully 4 pieces. I guess I was lucky. 🙂 Thaks for the tip, cnxsoft.

I got ‘Sorry, flash sale is over’ too. Just to bad, they won’t get me as new customer.

Gearbest usually do that kind of offers that are fake, One price when you buy but another much higher when you pay.
Also most of the reviews are fake, At least bad ones are not published.

Got two some hours ago: 12,7 euro (I had around 3 euro discount for a previous order) for both, to Italy, no shipping, from China warehouse. Currently is 19.99 for each one.

damn, too late for trigger buy…

gearbest / banggood (especially banggood i believe) do those publicity stunts a lot.
Slash discount for a limited number of pieces, i’ve even seen that for 1 piece only..

A word to cnxsoft, it would be more interesting (less frustrating) for the visitor to see discount which are time based, like many on gearbest. Unless they disclose the number of pieces for the discount, so you can put it in your title as well and let the visitor known right away it’s not worth bothering.

@mdel I use “(promo)” in the title of my posts when the price is temporary. I did not know it was a flash sale when I posted, and If I remember correctly it said the promotion will last until July 22, but it’s clear that at that price the company is either selling at cost or at a loss, so it was bound to be stock limited. I can ask more info to the company before posting, but in that case I would never have posted about it since I got an answer after one or two hours, and everybody… Read more »

The problem is that now the offer is long gone and reading about it only made me feel bad that I didn’t get it … maybe update the article to say that the offer was valid ( expired in the title or something ) so that people won’t get their hopes up.
Also it’s too bad that they didn’t put a limit on the maximum pieces someone could buy. Anyway not that big of a deal since for one piece the difference is only like $8 compared to Aliexpress and maybe they’ll have a promotion on Aliexpress too.

Or, maybe you can refrain from sponsor this actions from GB or other sellers.
Anyway I think they only bring bad reputation to Gearbest.
An update, my friend receive an invoice from GB so he can pay today, at the flash price.

@JotaMG
At least around 40 people managed to order the board (in various quantities) at the promotional price.

That is right, but probably hundreds (thousands?) felt deceived…
The question is what is more important?

And, my comments are not about the flash sale ‘per se’, but the ethics of GB – it seems that some payment methods takes priority over others or the way they don’t properly warn visitors the sale has ended.

STFU idiots.I bought one of them.You came to late!
http://i.imgur.com/t8YJX5s.jpg

@Jean-Luc Aufranc (CNXSoft)
Don’t mind him. I for one am glad, that i could read it here because otherwise i just wouldn’t know and even couldn’t try to buy it. I also don’t understand the false logic of “promoting” GB like I would buy anything there if they’d screw me. So as far as i’m concerned please continue.

So they had a very very limited pcs for that price. Maybe 20-30 pcs and that for the PR stunt and to get new customers? Even worse, when i added to the cart a day ago, all went fine with that price and when checking out..price changed to $20!
What a crap!

@Fossxplorer Huh? People I personally know bought more than 30 pieces for the ‘flash sale’ price today. C’mon: Getting an Orange Pi PC for $8.50 with shipping included… that’s $10 less compared to the cheapest price before ($15 + $3.50 shipping). Why complaining? If you were lucky to get the board at that price (knowing the vendor or seller made a loss) then it’s fine, if you’re not familiar with online business (using throw-away email addresses for example to stop spamming you) then it’s time to learn and if you missed the whole thing, it’s also fine. @Jean-Luc Aufranc (CNXSoft):… Read more »

Came up late on this, shame on me as I didn’t check the site over the weekend.
@Jean-Luc Aufranc (CNXSoft): please do keep posting about promos or whatever you choose to name them.
@loosers: let’s keep trying

Meh got unrequested full refund from Gearbest this (Monday) morning without any explanation after successfully placing the order last Friday.

So much for “big promotion”.

update: today I received a full refund from GearBest, thru PayPal. With no more infos.

I too got a full refund for my order from Gearbest this morning without any explanation.

A couple of hours after the refund got the following message from them: Thank you very much for your recent order with us. We sincerely apologize for any inconvenience that may have been caused. Unfortunately, we are very sorry to inform you that we can not ship your order due to market`s stock shortage. We have cancelled your order and the refunds has been made on your original payment method. For this inconvenience,we will send you 250 points(equal to 5usd)as a compensation.Please kindly check your account. Thank you for your understanding. If you have any question , please feel free… Read more »

Ordered 3 on 14 July… Got refund this morning…

Ha, what a big joke and game gearbest is planing to get attention.
Really ridiculous.
@tkaiser, can you check with the ppl you know if they got similar refunds?

@ValdikSS @GK, you guys too.

@JM
Thanks annoying, but at least people get a $5 coupon. I think they don’t track the orders vs stock in real-time on their website. That’s bad, and I hope it’s not made on purpose.

I’ll be able to see if anybody (who ordered through a link on CNX) got their board in about a month.

I received a full refund from GearBest, coupon is not present in my account.

2x $5 coupon ?? How many boards did you order ?
Neither do I, coupon is not present in my account…

The site write “refund” all (2) orders, but not see my point grow.

@Jesu
Can’t you spend your point (like a coupon) when you make a purchase?

Got my 250 points today ($5) but “You can use points for up to 30% of the final item value.”
I was happy enough with refunding !
Fact is that I still need at least 2 boards, Aliexpress is now the cheapest place to buy ?

I’ve made two orders. They refunded both, and gave me 250 points for both or something like that. I don’t really care that much. I knew it may not work out. I ordered even before it was confirmed it was a flash sale.

Mine was finally shipped today. Seems I’m one of few lucky guys 🙂