Intel Apollo Lake is the next generation of low power processor family that should replace Braswell Celeron processors, and Fanlesstech got hold of the specifications for two upcoming “Arches Canyon” NUC6CAYS and NUC6CAYH NUCs (Next Unit of Computing) mini PCs based on the processors, as well as the 2016-2018 roadmap for the complete (consumer grade) Intel NUC family. 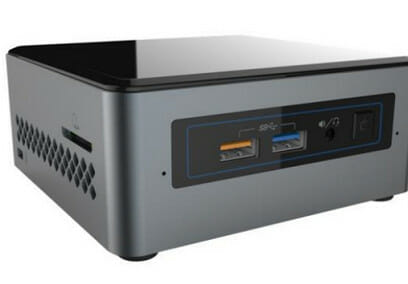 The only differences between the two models are that NUC6CAYH is a barebone model without memory or storage, nor operating system. So I’ll just list NUC6CAYS specifications: 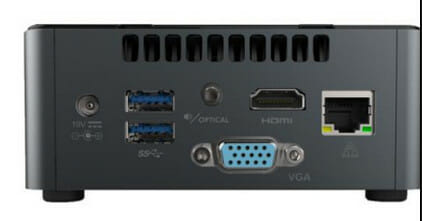 NUC6AYS will include Windows 10 Home x64 and Intel Remote Keyboard. Other features include multi-color front panel LED light ring, built-in dual array microphones, VESA mounting plate, front-panel and AUX_PWR internal headers. The NUCs will come with a 3 year warranty. Intel does not appear ready to give the complete SKU and operating frequency of the processors, but the good news is that Apollo Lake will be the first low power Intel processors to support HDMI 2.0 allowing for 4K output at 60 Hz.

WHY IS THERE A VGA CONNECTOR!!!!

I don’t get it, there’s this push for stupid things like replacing the headphone jack with a USB-C port, but we’re stuck with VGA connectors for display connectivity in 2016, a place where digital actually makes sense… :'(

Because some of us want to plug it up to a far better CRT monitor instead of a crappy LED?

I heard Apollo Lake was canceled … are you sure of this post ? Intel want drop this and go straight into Kaby Lake

For me If not – than better, im waiting for support HDMI 2.0, VP9, HDR and 10bit HEVC
(nvidia already support 12bit in HEVC)

TLS :
WHY IS THERE A VGA CONNECTOR!!!!
I don’t get it, there’s this push for stupid things like replacing the headphone jack with a USB-C port, but we’re stuck with VGA connectors for display connectivity in 2016, a place where digital actually makes sense… :'(

Because NOTE EVERYONE USES HDMI. Many Mini PCs are used for small projects, and many use VGA connection. All boxes should have VGA, HDMI and DP.

@Mat
No, VGA should simply just go and die… It’s a relic that should’ve disappeared a long time ago, but due to various “tolls” and import duties and other stupid anti-technology regulation by various governments, we’re still stuck with an analogue graphics interface from the 1980’s. Maybe you think computers should still have composite video outputs as well?

Really?! So how would you explain business lines of laptops? I need to disappoint you, but what you wrote is pure BS.

A lot of infrastructure for presentation is still VGA. Ask Extron.

maybe some should drop a micro-vga socket design

I am deploying a NUC Core I5 with Vmware Esxi6 aso my inhouse server. So far so good. One TB of disk, 120gb pcie stick, 64gb of ram.

Installed vmware from a USB stick.

@TLS
It’s a low cost device so they want backward compatability with low cost display devices like VGA tv’s, monitors, and projectors. It costs next to nothing to include it, so why not? If it’s not present they will lose some sales into the low end market that is their target market. Also remember, these things are sold worldwide. In places like India, Brazil, and Russia, there could be lots of buyers in the VGA space.

@Renw0rp Lenovo has dropped VGA on all their ThinkPads finally, so no, it’s not on all business laptops. The one reason people still use VGA tends to be old projectors and that’s about it. Tough, get a HDMI or DP to VGA adapter then… Personally I can’t see the VGA connector disappearing soon enough. Also, nothing I wrote was BS, as the VGA connector came around in the 1980’s and the reason displays still have VGA connectors in some countries are down to higher duties and import taxes on displays with digital interfaces. @Brad How does it make sense converting… Read more »

TLS, you are simply wrong on the statement about VGA. I’ve not received a unit yet, Dell, NUC or several other desktop type system w/o VGA. I’m not debating why, it’s simply there. All TV’s I’ve found in retail here in the US have VGA, so I don’t know where you are, but in the US they still are mostly VGA. The only thing I’ve seen dropped is the SVGA or stripped sync inputs. About 1/4 have the RCA color RS-170 color connector and support. As to what I’d like to see, I’d like to see wireless display support integrated… Read more »

But why would you even want to down convert a digital signal to analogue to then convert it back to digital again to get a picture on your screen? It makes no sense at all today, as no-one’s using analogue CRT screens any more…

@TLS LCD’s endpoints are analog. The dot matrix controller module ( http://www.lcd-module.de/fileadmin/eng/pdf/zubehoer/t6963c.pdf for example ) takes digital input and outputs high frequency analog signals to oscillate the crystals to produce a color filter. The LED array then illuminates through those filter layers and you end up seeing specific colors. You’re not turning different colored LEDs on and off digitally. When modern monitors have VGA input sockets, they don’t covert to digital. They processes the signal with analog frequency modulation and amp cut-offs. So: HDMI: Graphics card (DIGITAL) -> Monitor (DIGITAL-to-ANALOG). VGA: Graphics card (DIGITAL-to-ANALOG) -> Monitor (ANALOG-to-ANALOG). Saying all that,… Read more »