[Update: Some pictures have been removed due to some NDA issues]

Intel Atom “Avoton” server processors are the equivalent of Bay Trail processor for mini PCs, laptops and tablets, and with the upcoming release of Apollo Lake processors, Intel has a matching family codenamed “Denverton” that will be used in servers and NAS. Information about the new processors is scarce, but Anandtech spotted an early motherboard prototype last month at Computex. 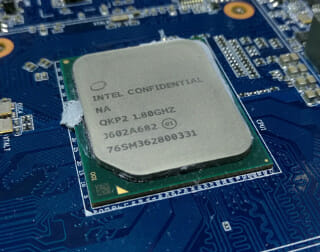 Intel Atom “Denverton” single core performance is expected to be slightly better than Avoton, but the power consumption should be quite lower by core.

Anandtech expects more information including specifications and pricing at IDF (Intel Developer Forum) next month, or possibly at SC16 in November.

I hope whoever has the sample has their body armor on. Intel can track all those from the numbers on the chip, and they are more serious about security than anyone I’ve ever seen.

May have permission to show it, but when I dealt with Intel I couldn’t even admit having those sorts of things.

Interesting times: an Atom board with “2x 10GbE SFP+ ports; 2x Gigabit Ethernet RJ45 ports ” and “4x RDIMM/UDIMM slots”.
Because of all the hardware, I expect a high price.

@Sander It starts to get interesting. 2 x 10GbE SFP+ you get on Cortex-A72 boards for as less as $350 currently (ARMADA 8040 — Jean-Luc blogged about recently). The older Avoton boards were already great for nearline/cold storage combined with the large Seagate Archive HDDs but the boards allowing more than 6 disks had to rely on additional PCIe attached SATA controllers. Now being able to directly attach 16 HDDs is great even if this number is not that rack friendly. 12 x 3.5″ disks is the 1U maximum — a customer uses ASRock’s 1U12LW-C2750 with Solaris x86 and raidz2… Read more »

If these chips uses Intel’s Goldmont core as Anandtech stated then that would be most interesting as the performance boost would be quite substantial.

BusyBee :
If these chips uses Intel’s Goldmont core as Anandtech stated then that would be most interesting as the performance boost would be quite substantial.

Unless Intel “optimizes” performance to be more in line with the performance of previous Atom processors, by throttling clock speeds. The Goldmont architecture has the capability to significantly overlap into the territory of their big core architectures CPUs like Xeon D in terms of CPU integer performance.