I’ve just watched a video on ARMDevices.net about Enlaps Tikee solar powered device designed to take timelapses over several days and transfer the pictures / video over WiFi, 3G, or 4G. The project has been fully funded on Indiegogo at the beginning of the year, and shipping is scheduled for Q4 2016. It looks like an interesting device for a niche market, but since I’ve noticed some products launched on Kickstarter already exists in one form or another in China, I’ve decided to have a look on Aliexpress, and I found Wanscan HW00269-4 solar powered camera with 3G/4G connectivity, and while it addresses a completely different need, as a 720p IP security camera, I still decided to have a closer look. 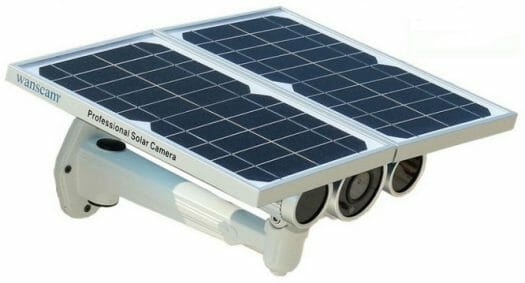 The IP Camera runs embedded Linux and ships with a bracket, a power adapter, an antenna, an Ethernet cable, a disk and 4 screws, as well as a user’s manual in English. It can be configured via a web interface from your PC, as well as “e-view7” mobile app for Android or iOS, but reviews rather mixed on Google Play. There’s very little info about 3G/4G support, and GearBest staff  – in their “customer questions & answers” (which is not always correct to say the least) – answered there’s no support for SIM card to one of their customers, so it could be that you’d need to connect a 3G or LTE USB dongle if you need this option.

Interesting products, but like all battery-based ones, I worry about battery life before replacement is necessary — and whether it is even possible, and how much it would cost.

Do NOT, I repeat DO NOT buy anything from GearBest.com. Their return policy is problematic, complex, time consuming, irritating, and overall BROKEN!! DO NOT BUY FROM GEARBEST!!!!

I handled several different Wanscam solar models last month in Shenzhen. Packaged in a single box, you put them together yourself, and for some reason, they don’t seem to fit together very well. Certainly not as seamless looking as the advertising pics. The solar panels were cheap feeling and the external wiring seemed easily compromised to me on many levels. In my estimation, the entire unit did not look like it would last more than a year (if that) under normal outdoor conditions. Extreme heat or cold, a lot of rain or snow, just forget about it. I passed on… Read more »

@Visi
What is not working? Not enough sun to power the camera? Problem connecting to the cloud? Something else?