Most TV boxes are now sold pre-loaded with Android, but there’s still a fair amount of people who only want to play videos in their box, or only run Kodi, so they may prefer a Linux experience. Some companies provide ready-to-use solution such as ARNU Box Mach 10 64-bit Pure Linux, but in some cases it’s also possible to side-load OpenELEC or LibreELEC, with the main advantage being that it is usually quite cheaper at the cost of being a bit more complicated. 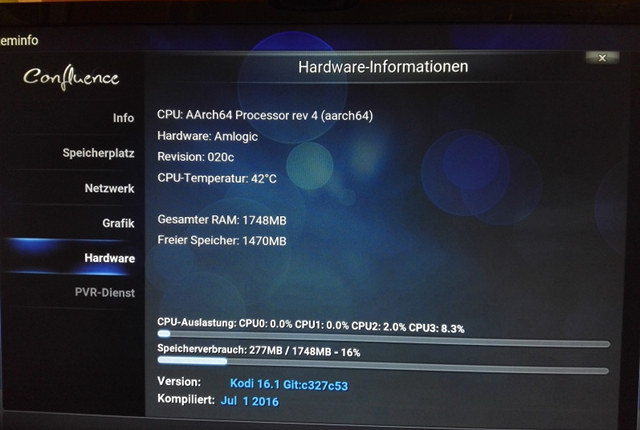 Thanks to a comment by Sabai, I discovered LibreELEC 7.0.0 had been (unofficially) ported to Amlogic S905 TV boxes, and tested one devices such as NEXBOX A95X (S905), WeTek Hub, Beelink S905 Mini MXIII, MXQ Pro 4K, and others. If you own an ODROID-C2 board, you can load another LibreELEC 7.0.0 image.

If you are unsure whether your Android TV box is supported, you should first try the SD card method by copying  aml_autoscript, kernel.img,  SYSTEM and 2 md5 files to the root of the SD card, and enter recovery. This is all explained in details in the forum post linked above, and this will not affect your Android installation nor data.

If you’re happy with the results, and don’t plan to use Android anymore, you can flash LibreELEC to the NAND/eMMC flash. The procedure is the same as the SD card method, except the files are different, and you’ll have to copy aml_autoscript, factory_update_param.aml and an update zip file containing LibreELEC firmware to the SD card.

The developers have already fixed many bugs, but at the time of writing there are still a few known issues for the TV box version:

There are also some unsupported features such as SSV6051 WiFi, front LED/segment displays, and built-in DVB tuners.

You can report other bugs on LibreELEC forums. If you’ve tried it on your own Amlogic S905 TV boxes, it might be nice to report success or failure in comments too.