There have only been a few phones released with or supporting Ubuntu so far, and those phones will normally be able to run Android too since Ubuntu Touch relies on Android drivers, and you may decide that Ubuntu is not for you and switch back to Android, or the contrary, if you’ve purchased an Android phone, you may want to install Ubuntu instead. In order to simplify the task of installing operating systems, Marius Quabeck has developed “Magic Device Tool“. 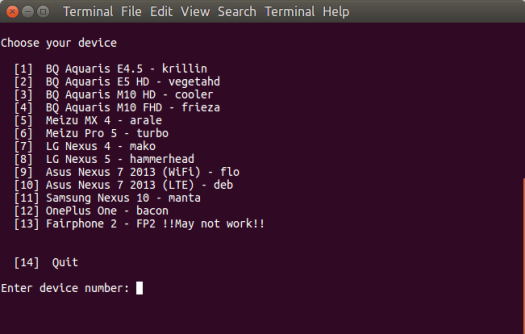 As you can see from the screenshot above, 13 phones and tablets are currently supported. You’ll need a computer with Ubuntu 15.04 or greater to install the tool, and I’ve done so on Ubuntu 16.04:

The script will also install phablet-tools if it is not already installed,  so if you are not root, you’ll need your account to be member of sudoers. Once the initial setup is done, you’ll get to choose your phone as shown in the first screenshot. I don’t own any in that list, but I selected LG Nexus 5 to give it a try. 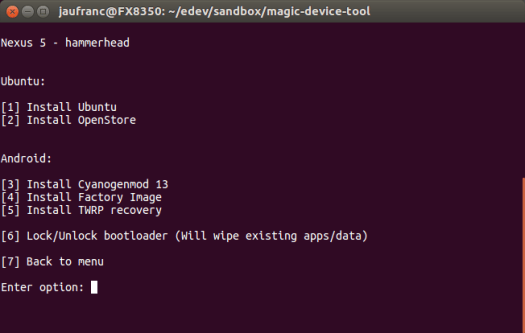 You’ll be asked whether you want to install Ubuntu, OpenStore alternative app store for hacks, developer tools and app previews, Cyanogenmod 13, the Android factory Image, TWRP recovery, or instead lock or unlock the bootloader. I selected [1] Install Ubuntu -> [1] Choose a channel to flash (Will remove existing apps/data) -> [1] stable, and the flash procedure was about to go ahead:

You’d need your Nexus 5 phone connected to your PC via a USB cable to complete the procedure, but I canceled since I don’t own the hardware required (yet).

The utility can also install PhoenixOS on some phones, and it will soon be improved to include an Android backup/restore option, so you can reflash Android will all your settings and apps.

Via UbuntuFun.de and Ubuntu Australia on G+

nice
Ubuntu should made this tool long time ago!

I hope, FP2 will also work with Ubuntu soon…

now all we need is support for Plasma Mobile

@peter
I will fix that soon 🙂

Great… you may post (info about) an update also in the forums at ubports.com … and at fairphone.com (of course..)