With WeTek Play 2, initially unveiled as WeTek Play+, we now have a successor to WeTek Play with the same ATSC, DVB-S2/S, DVB-T2/T/C tuners, but much better specs thanks to Amlogic S905-H processor, 8GB storage, 2GB memory, and support for HDMI 2.0 and 4K60Hz video decoding allowing you to watch 4K UHD channels via your satellite dish for example. The device can be pre-ordered for $119.90 with the tuner of your choice, and shipping is slated to start on September 6th.

The receiver runs Android 5.1.1 with Kodi 16.1, and ships with a remote control, an update nail, an HDMI cable, an RS232 cable, and a power supply. 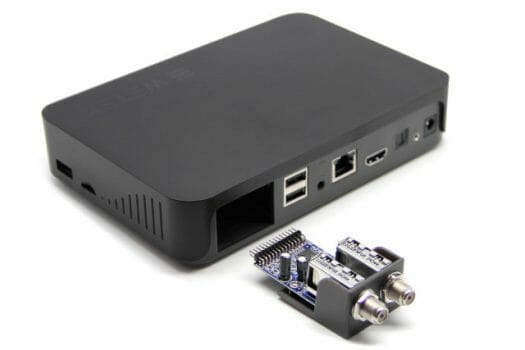 I’ve been sent a review sample, which has been stuck in customs for about 2 weeks, but I expect it to be “liberated” sometimes next week. You can find more details on WeTek Play 2 product page.

Well, somebody will tell you that this is a quality box with regular updates and a wonderful community behind it, so it deserves all the money they ask for it.

Where are they now?

I have to see what is happening with satellite tuners from the time I had the dreambox 500s.
Now I see those 905 boxes at 120$ dollars and some new dreambox clones more expensive 150-500$.
is there a reason to buy a dreambox or a 905 box with a dvb-s2 tuner is a better and more flexible choice?

Not impressessed with WeTek anymore since they have in practice already stopped supporting the first WeTek Play.

It is only fine to sell items at a premium price if you also offer premium support and long life-cycles, lika Apple does.

I was little bit curious about your statement and made little search, their first model is still supported with android libreelec and enigma 2

Harley, can you explain little more about supporting older models?

Personally I use IT9135. And configuration http://wiki.openelec.tv/index.php/Configuring_Tvheadend

@Mark all this combinations will be minimum the same price, than you have no android compatibility.
@Harley, even old Play have better DVB player that the current s905 competitors from wetek, and i personally want to see their new DVB Player in performance.

@Mark except OC the reason you buy these boxes is to use the internal DVB interface and as yet kszaq states that any internal DVB card is not supported and so you cant use Openelec/Librelec for the very thing you want to do with the box ,i.e stream DVB T2 in my case to all networked lan devices here… “Unsupported: S905X (not confirmed to work) SSV6051 WiFi front LED/segment displays built-in DVB tuners” its a shame really as i’d rather not spend money on the x86 option or use an old power hungry spare PC to just stream DVB content… Read more »

But i don’t believe this and/or earlier WeTek devices will get and update for Android 7.

I agree with @harley that support for the WeTek Play is falling behind (at lest for Android) while there is still something happening on the LibreELEC and Enigma2 side.

@Mark yea other S905 devices seem attractive and might be a better option but don’t relay on USB tuners unless someone tested it and confirmed working. The list you’ve mentioned http://wiki.openelec.tv/index.php/Supported_TV_Tuners mostly applies to X86 or the RPi.

At this stage, new devices should have s912 and Marshmallow! or at least s905x!

And pity Wetek had given-up on the analog AV port…

Would an unmodified Kodi from the Play Store work seamlessly on the Play2? Or does this device need a custom-made version made by Wetek?

I really want an Android box that is fully compatible with the stock Kodi!

Ron, S905X doesn’t support Tuners at all!! S912 is not in market, and if is like precious AMlogic SOC it will take year to be ok, it’s just a matter of remember the s905 first SOC generation.

@Mula
well they (S912) are up for pre-sale and they say they will “Dispatch:Ships after Aug 27” on most entries like the £60.94 Gearbest ACEMAX M12N Smart TV Box Amlogic S912 Octa Core, and the cheaper ones shipping a little later september 2016

It would be nice if the 3,5mm Jack would have a mic-Input option, I love the speech recorgnition function.

@rebeL
I had assumed all mini-PCs with 3.5mm socket had Mic/Earphone for Skype conversation, and the published specs just too lazy to state. Is there a way of determining if each SBC supports 3.5mm Skype without having to write to each maker ?

How many modular tuners can we add?
Can we have together dvb-s2 and dvb-t?
Can I re-stream in local network a free2air channel?

And I’m wondering how fast is this gigabit network interface. Still 6 MB/s. In XXI century?

@Glebo
Most devices have network speed much faster than 6MB/s, but that’s not an uncommon speed to copy a file from network to the internal storage.

@Jean-Luc Aufranc (CNXSoft) Much faster means in 12MB/s region top for these cheap boards. Why they even bother to give this a Gbit interface? I suspect all is internally connected to the same crowded usb2 hub. I see lost potential here. Not everybody have dedicated NAS (i haven’t) but almost all will like to be able to get a properly tagged library of movies placed on an usb drive connected to one of these devices. But then what? Upload a 12GB in 8MB/s speed througt the local network or run back and forth between player and a material source with… Read more »

Geekbuying has pre-orders for the Android TV based Mi Box now. 99USD is very pricey for AMLogic S905 but I have a feeling this is the box to get http://www.geekbuying.com/item/-Official-International-Version–XIAOMI-Mi-Box-4K-H-265-Android-Box-371297.html

@Someone from the other side
It is the slower S905X-H and has no ethernet.

@Envagyok75
Yes, I’ve expecting them to use the same tuner board as on WeTek Play -> http://www.cnx-software.com/2014/08/14/unboxing-of-wetek-play-dvb-s2-android-linux-stb/
However, AFAIK you can only use one at a time, e.g. you can’t watch live TV on one, while recording on the other.

Customs won. I’ve decided to abandon Wetek Play 2 due to the paperwork and costs involved.

I contacted Wetek for a cheaper shipping option. They answered back they did not trust the shipment to arrive. What you believe is what you get.
So I left Wetek too. Shipping and customs add more than 100% to the sale price.
Other options please

@Jean-Luc Aufranc (CNXSoft) sorry about the customs nightmare.
I’ve preordered mine on Aug 20 and apparently today it has been picked up in Ljubljana by DHL, one day earlier than the promised date of Sep 06, hopefully will be in my hands in a couple of days (I’m within EU).

is there any other boxes with tuner and 905-H in the market or did we expect something?

@anotherone
Very few manufacturers have Dolby/DTS licenses. If your country broadcasts digital TV with AC3 / DTS audio and you want to use a cheaper box, the only option I am aware of right now is to use OpenELEC/LibreELEC image on K1 Plus T2/S2, or maybe K2 Pro (TBC).

As I told to the other thread the k2 pro is in an email/app ppromotion from banggood at 61$.
The price is great but I do not need it immediately so I wonder if there is another better box or maybe a newer from Videostrong with 905-H?

Is there a “sleep/standby” mode that allow to re-start quickly the box ?

Lords that confusion I entered bought the wetek 2 I only have headaches. Locks and more app locks do not open one update after the other I’m tired of resetting and configuring apps I followed some buying tips I gave bad The box has more support has no developers Nothing in the box works as it should and unbelievable The box restarts itself several times http://wetekforums.com/v/index.php?p=/discussion/comment/46581#Comment_46581 A rubbish would not recommend to anyone. Seeing some comments on the wetek play the first model I came to the conclusion who saved the brand was enigma2 and not android Wetek 2 this… Read more »

I bought an Android box
I’ll have to settle for Libreelec
And the end friends
http://wetekforums.com/v/index.php?p=/discussion/comment/46742#Comment_46742

Agreed!!! This is the worst I’ve been ripped off in a long time.

There are forums in UK where they say Wetek are the best, are they really that foul a product?

@theguyuk
Some forums sell for little to talk about products
Enter in the forum of the same see the neglect with the first model the wetek play, discontinued more full of bugg a can of imperfection
A lot of advertising is really just amateurs making misleading advertisements.
Nothing works as it should with many locks and heating.
I’ve been robbed, too.
Blow company

See what’s happening here!
I want to return the box because it is not good for anything
More unfortunately the support denies the contact
I think it’s waiting to expire
Do not fall for this friends I’m outraged and with some revolt
Because the holder is equal to the box.
does not work!
http://wetekforums.com/v/index.php?p=/discussion/29308/new-wetek-play2-refusing-to-read-sdcard-and-rebooting-often#latest

I’m also a victim
Falls into the guarantee blow
The wetek team makes sarcasm MasterChief11
I will always be here along with others who can not stand the mark anymore, we feel cheated.
http://wetekforums.com/v/index.php?p=/discussion/29181/wetek-support-help#latest

Hello !
Please can somebody tell me what is the best choice to watch tv FTA channels, wetek play 2s or dreambox dm900 ?
Any reasons ? Thank you!

Hi,
My choice and satelit fun is dreambox DM900. Box is very fast, very good picture and you have support many teams with diferent images. Only in Europe you have 18 teams img. Second is channel list for enigma box….
For androis sat box like wtek you dont have choice for good support.

how iam atach to tv without av pot

Do you want to buy mine? It’s bricked