WeTek Electronics, a company based in Hong Kong, has sent me an Android TV powered by Amlogic AML8726-MX dual core Cortex A9 processor. Nothing new here, but I was very very interested in reviewing it because it includes a DVB-S2 tuner, and on top of their stock Android firmware, the company provides various Android and Linux firmware files such as CyanogenMod, ParanoidAndroid, OpenELEC, Linux with Enlightenment desktop environment, Lubuntu 14.04 and so on. Today, I’ll list the hardware specifications of the device, show some unboxing pictures and video, and as usual, open the device to see what’s inside. I’ll provide a full review in one or two more posts.

Apart from the DVB-S2 tuner are the serial port, the hardware specifications sound familiar:

I’ve received the box via TNT in the package below, together with a registration card with a QR code. 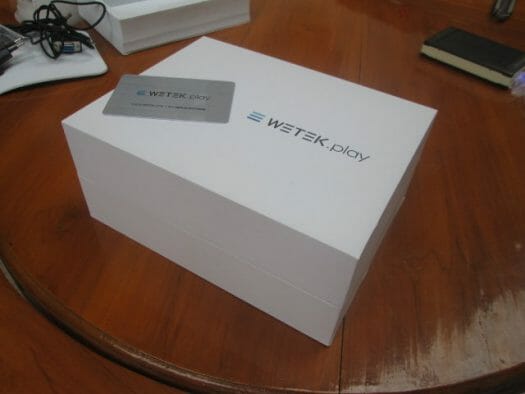 The QR code redirected to a registration page (under development), but in the final product it will simply redirect to WeTek.com, and you just need to click on Activate your device to join the membership section. I’ve been told this can also be done in the box itself with the Welcome Wizard.

Inside the package you’ve got two boxes: one with WeTek Play box, and the other with an IR + RF remote control / air mouse, a 12V/1.5A power supply, and, to my surprise, a serial cable (TTL to RS232). There’s no user’s manual with this early sample, but the final product will come with the user’s manual (See PDF), and a HDMI cable. The two AAA batteries required by the remote control are not included, but you’ll probably want to use rechargeable battery with RF remotes as the ones I have need to be recharged every 2 weeks or so.

The box is made of plastic, but still feel nice. At the front, we’ve got a power button, and the three LEDs for power, LAN, and Wi-Fi, on one side, we can find a USB port, and the micro SD slot, and on the back panel, there are two antenna connectors for DVB-S2, 2 more USB 2.0 ports, the AV port, Ethernet (RJ45), HDMI output, optical S/PDIF, the RS-232 connector, and the power jack.

If you’d rather watch an unboxing video, and listen to my voice, here it is…

And now the fun part. The back of the enclosure comes with 4 rubber pads, that I had to remove in order to remove the 5 screws. You’ll also notice the box can be wall-mounted, and there’s a upgrade through hole for firmware upgrade.

The top cover does not pop-up that easily, and I took off the Wi-Fi cable as I opened it, and I’ll need to do some soldering. The final product will come with a Wi-Fi connector, so that issue is less likely to happen for the few people that may open the box.

So we’ve got a daughter board with two DVB-S2/S tuners with Availink AVL6211 channel receiver (enhanced version of AVL2108), and the mainboard simply called MX with the Amlogic processor and memory, AP6210 Wi-Fi module, another AVL6211 chip, and two USB dongles with PCB marking reading “USB Token” and “2.4G dongle”.

The one of the top is the 2.4G RF receiver for the remote control, which I find it much nicer than having to connect it outside. I’ve taken it out, and Linux reports it as a USB keyboard mouse by HGBIC (VID=0x2252, PID=0x0100). The dongle at the bottom, is not recognized by Linux, but I’ve been told it’s an anti-copy USB token to protect the firmware, and avoid clones using their firmware. The box won’t boot if you remove this dongle.

Another intriguing part is the way the Wi-Fi antenna is fixed to the enclosure. I’m not sure why it is done that way, but I’ve never seen anything like it in the other boxes I opened.

There’s not that much to see at the back of the board.

WeTek Play does not seem to be available yet, and the company is looking for distributors.

That’s all for today. Next, I’ll probably test Android, especially the satellite receiver part, and post a review, following up by a review of the Linux images with VPU support (hardware video decoding) via Gstreamer (Gplay), but maybe not DVB-S support (TBC).

could you check if openelec works with TV on this box? http://matricom.net/forum/index.php?topic=11823.0

Works great and plays everything on my amlogic mx Box.

” I’m not sure why it is done that way, but I’ve never seen anything like it in the other boxes I opened. ”
It’s the same dipole that you find if you open a little and classic 2,2 dBi 2,4 Ghz rubber antenna with RP-SMA connector.

RS232 port and cable is UART debug port (TTL to standard RS232 conversion included). Simplifies debugging/developing… No need for soldering UART pins on pcb and having board open.

cool to have so many firmware provided

@d1dd1 They have booted OpenELEC on the board, but I think the hardware is different so the Matricom version may not work. They did not give me the firmware, only provided a video (now deleted). @Stane1983 I thought they might have use it for something else, as a configuration console , but you’re right it’s just to access the serial console. @memleak.in Here’s the full list they provided Lubuntu 14.04 (No link, because the only provided Ubuntu-core for now, and you need to run apt-get, but they’ll provide a full image soon) Linux Enlightement ( https://mega.co.nz/#!iAkhgRzY!QkvvAr5b1KgUvFhmjb9aavJYax-3lps0NM0zn5VHvd0 ) unofficial Android ROMs:… Read more »

@Jean-Luc Aufranc (CNXSoft)
I know, thats why I wrote it 🙂 I think WeTek is doing good job by not only preparing Amlogic sdk for their box and sell, sell, sell…

I hope they will release some stuff as open source (kernel patch,…)

to Stane1983> still no armhf mali drivers from amlogic?

I downloaded ubuntu firmware
it isn’t ubuntu it is busybox

They try fbturbo with x.org but is is commented now in xorg.conf
and Enlightenment
they also has build in qt5

@m][sko
There’s no link for ubuntu… so must have downloaded Linux + Enlightenment. 2D/3D graphics may not be accelerated, but the VPU is.

@Jean-Luc Aufranc (CNXSoft)
I can’t find any info that Lubuntu use busybox. I think that Ubuntu firmware is just Buildroot

@m][sko
The only Ubuntu version I have is that one: https://mega.co.nz/#!HMdBSYYZ!OfDIcPdr5eJV-_j_MTg8ztKqgBrrE5ugXH6ADICWjbU
No VPU, no GPU support however that why I did not link to it.

i really like the way they are using internal plug-able expansions so you can potentially replace the dvb card etc, however id REALLY like them to use a quad core with more ram on these in the future… i also wish that the shenzhen OEM’s would start to add USB3 and sata to their products and new SOC ASAP as we can currently replace the x86 boxs without that, id gladly pay $10 more for a product that added that as a generic option and theres really no excuse not to add them today as theres lots of bridge chip… Read more »

Where is kernel source this box. Any body have it. Pls reshare

@taki
you can start on amlogic site
http://openlinux.amlogic.com:8000/download/ARM/
and then
http://forum.xda-developers.com/showthread.php?t=2418029

I have one question about the Dvb-s2 tuner, do you think that it is possible to connect the dvb-s tuner to a raspberry pi? I thought that the openelec box from wetek supports also this tuner and also it is a really cheap part and when it would work, that would be a really cool tv receiver