I reviewed Wetek Play Android media player with a DVB-S2 tuner this summer, and although I found it pretty good for a dual core media player, and liked its PVR functions, more work was needed to fix several bugs, and improve “WeTek Theater Live TV” app. Several months later, they must consider their devices ready, as they’ve now launched their online store selling the DVB-S2 and DVB-C/T/T2 versions for 109 Euros, and a version without DVB tuner for 99 Euros, all including free shipping worldwide. 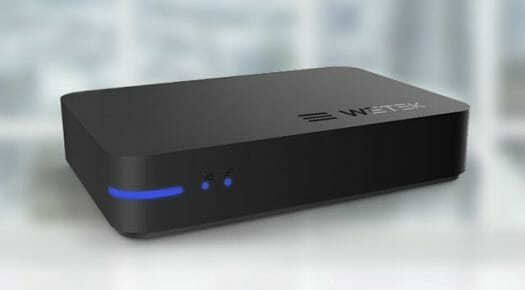 Let’s remind us of the specifications:

When I received WeTek Play package it included the media player, a 12V/1.5A power supply, a RS232 serial cable for debugging, a IR + RF remote, and a registration card to activate your device online. The retail package will include all that, plus an HDMI cable, and a multilingual Quick Start Guide.

Beside running Android 4.4, the company also provided me with some images for Lubuntu 14.04, Linux Enlightement, CyanogenMod, AOKP, OMNI ROM, and PanaroidAndroid, as well as CWM and TWRP recovery. But these are rather old, so I’d wait for the latest images on their Download page (now empty, except user’s guide). More recently, I’ve also received links to the latest OpenElec 5.0 and Android 4.2 images. You might also find more details on WeTek forum, where the Linux section is moderated by codesnake an active OpenElec developer. The device is also one of the rare Android media players to be get the Google GMS certification.

Further details can be found on WeTek Play product page.

I think the price is too expensive, and that the work is easy enough to put on a MX because Amlogic no longer support DVB from versions M8.
Apart compatibility OpenELEC I find that there is no interest in buying it.

@CSylvain It’s clear that it’s not the cheapest device around. However, the package includes an Air mouse (usually $15 to $25), and the price includes 22% VAT. So if you buy outside Europe, the price might actually be 85 Euros, let’s remove an extra 15 Euros for the air mouse, the price goes to 70 Euros, or about $85, which is still higher than $70 DVB-T2 box, but not that much, and the software will be better, and you’ve got multiple OS images and forum support. So I still think the price is fair. Having said that, and based on… Read more »

I got screwed by my ambitions to use linux, their remote control would not be fit for just a TV using OpenELEC.
The links provided above include a TV remote …
Regarding the price, I made the conversion into euros, adding 25 USD, and I end up with a total of 74.93 Euros https://fr.finance.yahoo.com/devises/convertisseur/#from=EUR;to=USD;amt=74.9388

Do you know, whether there will be a future version sporting maybe a decent quad core with mali 450?

I really like the DVB-S2 integration, although hardware that makes casual gaming possible would be even nicer and make this a complete allround box.
Are there any other devices with this kind of hardware (quad core CPU, at least mali 450 and 2 GB of RAM) that support DVB-S2, Android Apps and XBMC/Kodi (not necessarily via Live TV in XBMC)?

I would be glad if any of you could give me some advice.

WeTek is now listed at http://www.openelec.tv , so probably this device will be soon officially supported.

Yes, it will be officially supported. First Wetek then some other Amlogic based systems. And also 2 new i.MX6 based devices.

@David
Only Amlogic offers tuners “GPIO”, otherwise it is necessary to use “Tuner-USB”.
I asked a question similar to “Amlogic” and they answered me that will no longer support the versions “M8”.
There is an interesting project that was born (E2BMC) which is developed by Korean (luka.tv), a video was released recently :
As against the price of the “Mutant HD2400” is very uplifting, I hope one day a box “ARM” like this !

I bought cheap DVB-S2 at last year’s AliExpress sale. It locked up on sat channel scanning. I had dispute with the seller for a month, at the end with 3rd firmware they sent to me it didn’t lock up. I didn’t have sat installed yet though at that time. It tool few month to get dish installed, and then turned out mediaplayer doesn’t detect any sat channel. Couple of weeks later, after soldering serial, turned out they sent me hacked DVB-T firmware. Searching interwebs, many people who bought the same-looking cheap model had the same problem with lockups, no matter… Read more »

Codesnake are working on OpenELEC support

WeTek say that they are working on XBMC / Kodi too

They claim to have applied to become a project sponsor

I checked out, they are Diamond sponsors of Kodi/XBMC

@CSylvain Thanks! Sadly though, ~350€ for the HD2400 is much more than I am willing to spend. Plus I won’t be able to play games on it. But do you or does anyone else know which Android box features the best hardware AND is capable of using a USB DVB-S2 tuner or has one builtin? I have a Technisat SkyStar USB HD which I wanted to use with my Raspberry Pi, but – as it turned out – the Pi was not capable of being the TVHeadend server and XBMC client simultaneously without severe lags. Is there any AML platform… Read more »

@David I’ve been told by Vigica, they’d have quad core boxes with DVB tuners next year. Otherwise, but it’s a bit more risky, you could get an ODROID-C1 (Amlogic S805) with should have source code (linux) + XBMC Linux support, and use your DVB-S2 tuner with this board. It may require some work, but since it works on the R-Pi, and it’s just a USB device, it should be relatively easy to backport support for that board, or it may even already be there. An Android image will also be available as the board ships, but source code will only… Read more »

In that case You need WeTek Play without tuners, and to install OpenELEC 5.0 and connect Your tuner by USB to WeTek Play and to use it in combination with tvheadend.

@Jean-Luc Aufranc (CNXSoft) @kusta Thanks for your replies! I guess I will have to wait for a more powerful device that has a builtin tuner and supports dual booting. It does not really matter to me, whether I can use the LiveTV functionality of Kodi, so Kodi as an Android app OR an Android app that supports my tuner would just be fine. Maybe I will just wait for the DV7810-S2 http://en.sdmctech.com/index.php/Products/content/id/75 to show up for private customers or as Jean-Luc suggested for a Vigica device (any specs yet? An Android solution like the WeTek Play would just be awesome!).… Read more »

So it is official: http://openelec.tv/news/21-partners/150-wetek-new-sponsor-of-openelec

@droidelec
Not even a line on the thank you codesnake which has done a tremendous job, certainly with much difficulty. 🙁
Aside from him, no one has managed to do a version AML.

@Jean-Luc Aufranc (CNXSoft)
Thank you for this great news 😉
I hope that also add support DVB-CI+ because the offer DVB-S2 without interface CAM or even smart card, it is useless for those wishing to watch pay channels.

Well I think he work’s at WeTek.

Will it be possibl, using this device, to stream channels received through the “antenna” cable to others using internet?

I will wait for a newer version of WeTek Play that is build on AMLogic S805 or S812 instead.

@CSylvain Pretty sure that Codesnake is a member of the OpenELEC project now?

Harley, yes he is. And also droidelec is correct.

I think what a lot of people seem to be missing (Obviously including you) with the AML8726-MX, is stability.
Such a rush for the quad core and octa core etc. Give me a stable device over a rushed one any day.
iPhone 6 plus uses the same tech from an ‘old’ Note. But you can’t fault iOS, it’s smooth and fluent.
I’m not comparing the two, but as far as Chinese Android boxes go, the AML8726-MX is consistently the most stable. S802, S805, S812 devices aren’t yet. And i abhor Rockchip for now.

finally, the first DVB S2 S805 in the market, I just saw it today on aliexpress, it’s VENZ K1, seems very nice but the price is steep for an s805 STB hopping for a 60 USD max for it’s kind of devices, but it finally moving in the DVB S2 front, hopping just for an openelec port on the device