Minitbox Mini is a low power mini PC based on Compulab Fitlet-i computer powered by AMD A4 Micro-6400T “Mullins” processor and running Linux Mint that was launched in 2015. There’s now an upgraded model – Mintbox Mini Pro – with a more powerful AMD A10 Micro-6700T, more RAM and storage with 8GB DDR3 and a 120 GB SSD, and faster and better networking thanks to 802.11ac WiFI, and dual Gigabit Ethernet.

The mini PC is pre-loaded with Linux Mint 18 Cinnamon 64-bit, but in case you’d change your mind, it also supports Windows 7/8/10, other 32-bit and 64-bit Linux distributions, and unnamed 32-bit and 64-bit Embedded OS.

The device ships with the power supply, an HDMI to DVI adapter, a 3.5mm audio jack to to RCA cable, two WiFi antennas, a mini-serial to DB9-male adapter cable, and the mSATA heatsink.

Since AMD Mullins processor are not quite as common as Intel Cherry Trail/Braswell processors, it might be interesting to compare AMD-A10-Micro-6700T  to a better known processor, and I’ve done so by pitting it against Intel Celeron N3150 Braswell processor found in mini PCs such as MINIX NGC-1. 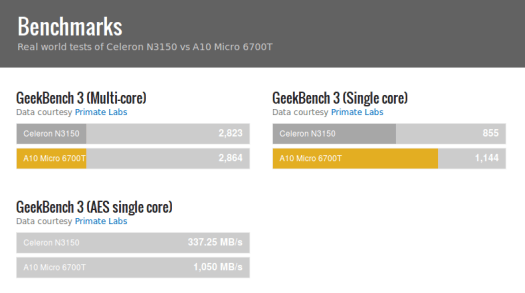 Based on GeekBench 3 results, multi-core performance is about the same, but single core performance of A10 Micro-6700T is about 34% faster. CPUBoss also reports that the AMD processor should consume less than the Intel one, as the former is rated 4.5 W TDP against the latter 6W TDP. How much a given mini PC will consume will depend on the overall system design.

Mintbox Mini Pro can be purchased for $395 plus shipping and VAT, and a 5-year warranty on Fit-PC website. You may also be able to find some more info on Mintbox Mini Pro product page.

I’m still waiting for a cheap passive cooled x86 PC, that would do hevc 10bit and vp9. Sadly, no such option exist right now and i’m skeptical for the future as well, given how intel killed off their cheap tablet chips.

@Benjamin I think it may take a few years. x86 computer are mostly designed for desktop operating systems like Windows and Linux distributions, and I understand if you want to play 4K videos at their native resolution, you need to set the resolution to 4K too (TBC), and it’s a little too hard to handle for the current GPU in low power SoCs. In Android and dedicated Linux boxes, it’s a little different, as you can set the resolution to 720p or 1080p while still playing 4K video @ 4K resolution since the framebuffer resolution and video buffer resolution can… Read more »

Something like Pentium J3710 would work for me, but i think it only supports 8 bit HEVC.

@Benjamin
Maybe software decoding of 1080p VP9 and 10-bit HEVC is possible on such platforms.