Finally an alternative to the recent wave of Intel Bay Trail-T mini PCs and sticks thanks to Compulab Fitlet mini PCs powered by AMD Mullins APUs, namely AMD A4 Micro-6400T and E1 Micro-6200T, with Radeon graphics, supporting up to 8GB RAM, mSATA, up to two HDMI port, up to four Gigabit Ethernet ports, and more. 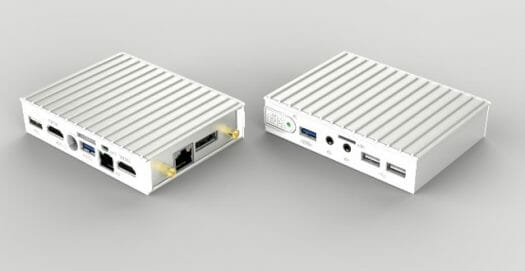 There are three Fitlet models: Fitlet-i, Fitlet-X with four Gigabit Ethernet port, and Fitlet-B, the entry-level option. In Q2 2015, a MintBox mini model running Linux Mint will also be released.

Fitlet mini PCs officially support Windows 7/8 64 bit, and Linux Mint. The details specifications for Fitlet-B and Fitlet-X are not available (or I missed them), but the formers features a dual core E1 ​​Micro-6200T processor @ 1.4 GHz with Radeon R2 graphics (3.95W TDP) and the latter the same A4 Micro-6400T processor.

If you wonder about the performance Fitlet mini PC are between “fit-PC4 Value” (AMD A4-1250) and Intense PC Value (Celeron 1047UE) in Geekbench 2 benchmark.

CompuLab fitlets will start selling in February 2015 for $129 for fitlet-B Barebone, via Amazon or directly from CompuLab or their resellers. More information is available on Compulab Fitlet product page, and you may want to check the press kit for pictures of the internals.

[Update: The Wiki shows some block diagrams for all three models, and even better a detailed comparison table between the three models.]

ZOTAC PA330 is another one with AMD A4-6400T processor but including 2GB RAM and 32GB eMMC storage.
But few other details for now -> http://www.anandtech.com/show/8884/zotac-updates-minipc-lineup-at-ces-2015

Too bad they didn’t choose the fastest mullins APU 🙁

hoping they won’t use a stupid Uefi 32 bit bios…

is there any comparison of these with baytrail based boards regarding power consumption ?

Only if you can find these boxes. All AMD models are out of stock at fitpc pages and also Zotac does not have any models with Mullins processors.