We’ve seen several Amlogic S912 octa-core TV boxes for under $60 in the past such as Beelink GT1, but KM8 Pro is the first one I see sold for less than $50, as it’s now offered on GearBest for $49.99 shipped with coupon KM8Pro. I’ve been told there are 200 units at this price, so it’s a stock limited promotion. 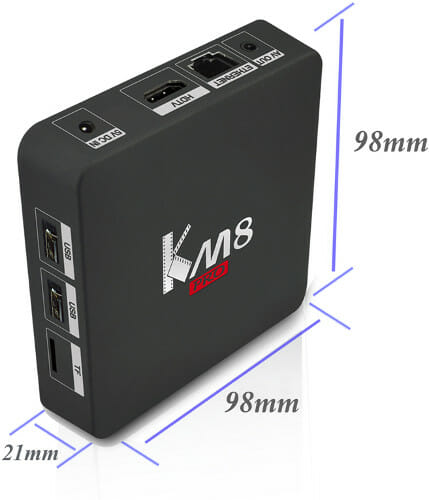 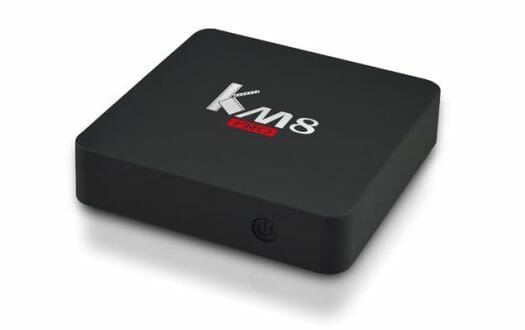 The device runs Android 6.0 with a Zidoo inspired launcher, and comes pre-loaded with Kodi 17 (alpha or beta). KM8 Pro TV box ships with x a power adapter,  an IR remote control, an HDMI cable, and a user’s manual in English.

Hi,
there was a promo on similar TV Box with identical parameters available – 49.99 for Nexbox A3 including shipping. I bought one piece for that price, now is it 75.99.
Tomas

is there any on-going project with putting linux or ReMix OS onto these S912 boxes?

Hi,
Is it expected that netflix/youtube @ 4k will (ever) be supported with this box (S912)?
FactorX

any answers? It is possible to run Remix os by s912? Please please please

44€ I bought the Nexbox A3 from banggood.
By the way the box is huge with better temperature from bb2 but with this awful launcher and without bluetooth mouse support 4.0 or 3.0 lile the a95x

Looks identical to the MECOOL BB2:

@Hugh Mayle
Both are made by Videostrong.

Hi Cnx soft
I would like to know why the GT1 S912 (A53) gives 2,0ghz CPU, and KM8 with the same S912 (A53) only gives 1,5 GHz speed, has It to do with the firmware that makes overclocking??
I have read here in these reviews (good job CNX) that these new CPUs Amlogic do not exceed the 1,7 GHz, and to stay stable at that speed will have to have a good Firmware programming (SDK-kernel) and must have cooling plates. Is that why some Tvbox are much more expensive than others with the same chips.
Appreciate any info about it.

@anotherone
Hi,
I use Nova Launcher free instead and am satisfied. For the price it was great buy 🙂
Tomas

@JOAQUIM JOSE SILVA T ALMEIDA All the Amlogic S905(X) & S912 devices(S805, S812 probably also) run at 1.5Ghz. All of these tv boxes(S905X seems to be reported correct at 1.5Ghz) have false reporting by the kernel to benchmark apps as they can’t exceed 1.5Ghz in speed. Rockchip RK3368 devices only run at 1.2Ghz but have higher than 35000 Antutu scores than most new Amlogic devices that are reported to be ‘2Ghz’ so it doesn’t make sense. If the Amlogic devices indeed ran at 2Ghz their Antutu score should have been around 45000 or higher. Some tv boxes are more expensive… Read more »

So I wouldn’t be so surprised if any non-heavily-multithreaded tests produce similar results across RK3368 and S905.

It can get a bit strange with box settings if you break the rules and experiment. warning you can mess up your box !

There are several free apps that allow changing setting on rooted boxes. Some setting give lower 3Dmark results but better audio or video on s802, s905, s805.
Results can be subjective, but AMLogic cheat on 3Dmark, so real world programe or game you intend to use are better.

doesn’t look identical, the board is different (has optical out) and a wifi antenna on the side.

Please read http://forum.kodi.tv/showthread.php?tid=252916 before buying S912 just based on specs and price!

– Any AMLogic S912 box running Android Marshmallow 6.0, like the Beelink GT1 as an example. Don’t get hoodwinked by clever marketing and Tech specs people. Its been awarded a D by our very own @hdmkv. A D for Do Not Bother!
There is NO LibreELEC Kodi support for AML S912 devices either.

@Fossxplorer
Has anyone tried latest SPMC ? I have it on my s802 box, nice audio.

I watched the video, had artifacts to start, but on my slow broadband, I had to buffer, and colours dark so I set my TV to movie mode.