Beelink GT1 is among the cheapest Amlogic S912 TV boxes available today, selling for around $56, but despite the inexpensive price tag, its specifications are not too bad with Gigabit Ethernet, 802.11ac WiFi, 2GB RAM, 16GB flash, and 4K H.265 & VP9 video capabilities. The company sent me a sample for review, and as usual, I’ll start by posting photos, and having a look at the hardware design, before reviewing the firmware in more details in a the second part of the review.

My package appears to have had a rough trip, but apart from the edges of the black retail package nothing was damaged. 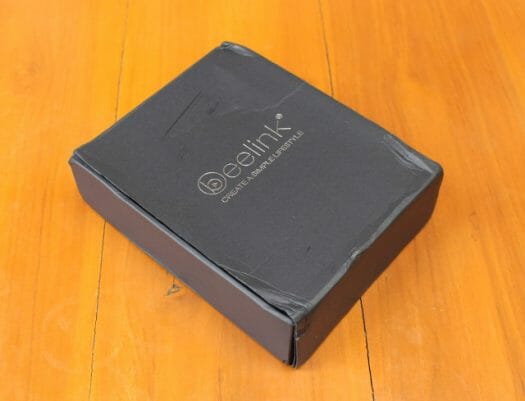 The main specifications are shown on the bottom of the package together with CE and FCC certifications, and the type of power adapter inside the package.

GT1 ships with a simple IR remote control, a shortish HDMI cable (~1 meter), a small 5V/2A power adapter, and a user’s manual in English just showing how to connect the TV box to your TV. It feels one of the way they’ve kept the price low is by selecting inexpensive accessories.

The box is rather small too, which looks cute, and reduce the cost of shipping.

We’ll find a USB 2.0 port and a micro SD slot on one side, and the rest of the connector on the rear panel with the power jack, one more USB port, HDMI 2.0 output, Gigabit Ethernet, and optical S/PDIF.

There aren’t any screws on the bottom of the case, so you’ll need to gently work your way around to pop-up the bottom plastic cover. 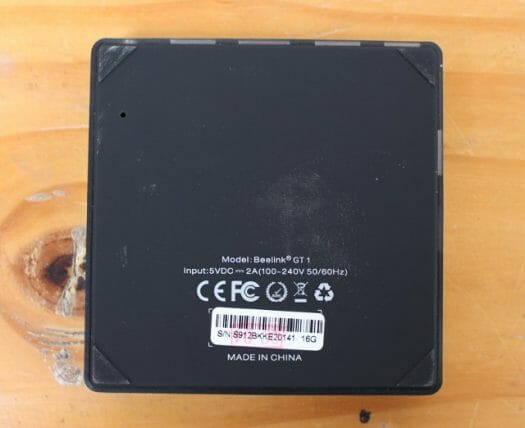 Once it’s done, you’ll find a heavy metal plate attached to the bottom cover, and some paste connecting it to a shield covering the processor and RAM chips. Since the paste feels dry, my box teardown may have a negative impact on thermal performance… so we’ll have to see.

The shield can easily be taken out. It comes with a pink thermal pad to cover Amlogic S912 SoC. Two Samsung K4B4G1646E-BCMA DDR3 SDRAM chips (1GB RAM) are paired with a 16GB FORESEE NCEMBSF9-16G eMMC flash. Wired connectivity is achieved via Realtek RTL8211F Gigabit Ethernet transceiver and H2403N transformer, while 802.11ac and Bluetooth 4.0 are done with Aigale AW-CM273SM. It’s the first time I see this module, but it appears to be a compatible replacement of Ampak AP6335 according to one Chinese website.

We’ll also find the serial console on the bottom left of the picture, close to the FORESEE flash. The board is actually called GT_V20, not GT1. Loosening three screws will allow us to completely remove the board from the case, and check out the bottom of the board.

Beelink provided the GT1 for review, and if you plan to purchase in quantities you may contact the company to do so. Beelink GT1 can also be purchased on Amazon US for $66.97, GearBest for $55.99 with GBGT1 coupon, and from several sellers on Aliexpress for $59.99 and up.

Cool to see a teardown on the same day I received my GT1.

Cool to see a teardown on the same day three days ago I received my GT1.

Do we have a Libreelec / Openelec Port already for S912 box ?
can you post the links or can you port it for these Boxes if you can ?

i got my one couple of days ago and i have to say i really like it is very snappy and it just works very good kodi work other apps work its all good.

The thermal paste comment brought a old memory of mine back of things you should not do but oddly caused no harm. Back then I put my own PC together from parts and friends I knew who did the same where doing a Physics and engineering degree. Anyway a Lad was using his Nvidia card when the heatsink/combined fan broke. He had no spares or real experience. It was weekend, he wanted to play his FPS games. So he removed the faulty parts cleaned the nvidia chip top and super glued a CPU heatsink and fan he had lying around… Read more »

adem nacakli :
i got my one couple of days ago and i have to say i really like it is very snappy and it just works very good kodi work other apps work its all good.

Hello
Could You Let me Know if The Real World wifi speeds on this box are any good?

Unpacked mine yesterday, plugged it in and did OTA update, started Kodi and found that screen resolution in Kodi is fixed to 1920×1080 , no settings to change that. Output in Android settings set to 4K60hz and my TV is reporting 3860×2160 signal. I set up my live TV feed from own Tvheadend server and found that video was choppy and picture quality was not as good as with my HTPC or the older S905. Updated Kodi via Google Play and restarted the unit. Same bad result with live TV feed, choppy video on all streams and somewhat lower picture… Read more »

@Feelgood
The user interface / framebuffer resoluition is different from the video output or “video hardware buffer” resolution. So usually we have a 1920×1080 user interface and 4K video output and playback support, meaning your video will be shown @ 4K resolution. More is explained @ http://www.cnx-software.com/2014/09/26/test-your-4k-device-true-resolution-with-a-4k-uhd-2160p-video-test-pattern/

Updating Kodi via Google Play may cause troubles, since those boxes often run Kodi forks with some optimizations or fixes.

I’ve never really looking into memory usage, but the operating system, launcher, some background services, and maybe some buffers are obviously take a chunk of the memory.

@Jean-Luc Aufranc (CNXSoft) Thx, the link for 4K_video_test_pattern.mkv is not working any more. I’ll test with the 4K test images from Dan Car. Regardless of the actual video output setting, i tried 1080/60hz, 4K/60hz and 4K/smpte, the tvheadend Live TV feed was choppy both before and after Kodi upgrade from Google Play, unfortunately i did OTA update before i started testing so i’m on latest firmware now. On my older S905 Live TV works perfect with same version of Kodi 16.1 so the feed is correct. I’ll change the HDMI cable and do a factory reset when i’m back home… Read more »

Does anyone know if this box supports Miracast source (i.e playing this TV box onto a TV over wireless)?

Think this should be: settings -> display -> cast screen and then enable the option “enable wireless display”

Is part 2 waiting for all problems to be fixed 🙂 ? http://www.bee-link.com/Beelink-forum-88-1.html
Seems that are plenty of users, me included that have all possible issues with this box. Would be good to hear from cnxsoft how it’s working for you.
Nice package but crappy hardware/firmware seems to be consistent for Amlogic boxes …

@Feelgood
No, part 2 is waiting for me to go through my other devices queued for review… I plan to connect GT1 around October 15.

@Michael
It can be found on an app icon, if haven’t, you can brush your device by: http://www.bee-link.com/forum.php?mod=redirect&tid=395&goto=lastpost#lastpost

@Feelgood
If your monitor doesn’t support 4k, it won’t show 4k option on your screen, you can test with a 4k monitor.
Clear storage it can use a square icon on bottom menu.

@hdastt
I mean to cast from GT1 to a TV. Not to cast from a device to the GT1. Is this really using an app and not under Android settings?

I really want to get a S912 tv box, but I have read many reviews about these boxes having problems with some green screen flickering, is there any S912 model that doesn’t have this problem?

As far as I know many people has found this issue in this Beelink GT1 model and Sunvell T95Z, so I am wondering if it is a general issue with the S912 models or just few brands.

@James
I have not tried it yet, but I’ve read people have language and green screens issue all related to HDMI CEC. So if you can disabled HDMI CEC in your TV, then many of this type of problems should be resolved.

Wifi modile uses QCA9377 chip which is Qualcomm solution and I’m pretty sure it’s not ampak compatble… 🙂 It was introduced with first ‘official’ Amlogic SDK for S912 (20160701) if I remember correctly.

@Stane1983
Could it be pin-to-pin compatible if it’s not software compatible?
That’s the sentence in Chinese:

@Jean-Luc Aufranc (CNXSoft)
If you’re going that way, it can replace all ampak modules because it uses standard SDIO interface, so yes, that can be it.

@Bob Snelgrove
If you’re not interested in 4K videos, then S912 won’t bring much improvements apart for a more recent Android OS.

@jet
If you look at the top left corner of the top of board, you’ll need two through holes with the text “ANT”. You might be able to solder a WiFi antenna here.

@Jean-Luc Aufranc (CNXSoft)
Actually there are two pogopins on the bottom of the board in that locatin, which should connect to the antenna on the bottom of the enclosure. But anyway, that’s where you should look in case you want to use an external antenna for longer range.

Hello,
I have received yesterday my BeeLink GT1 ordered from GearBest.
Problem is that the device won’t start. After plugging in the supply, LED lights up with a blueish colour, but pressing the remote control buttons doesn’t start the device. Any idea?
Thank you,
Cristian, RO

@Cristian Szabo
Beelink GT1 will start automatically, so I assume it starts, but you may have an issue with the connection with your TV. Can you can another HDMI cable and ports on your TV? If it does not work, could you check with another TV too?

OK, thank you. I will try it today with another TV. Regards, Cristian

@Jean-Luc Aufranc (CNXSoft)
Hi,
I have tried it with a different cable and a different TV set. It is still not working. When connecting a mouse to one of the USB ports, the mouse doesn’t get power…
Can I reset the device somehow, I read on some forum that there is a switch underneath the device and if you are using a paper clip you could do a reset…
Regards,
Cristian

@Cristian Szabo
It does not look. Your box may be broken.
But yes, you can enter recovery mode to re-flash the firmware, but considering you don’t have USB working that will probably not work.