Earlier this week, Nintendo unveiled their innovative switch game console that can be used in various configuration such as a portable game console, and a TV connected game console by inserting the portable game console into its dock, and detaching the game controllers on each side of the display. There are many ways to play with the console in single or multiplayer mode, and the best way to understand what’s possible is to check out the video on Nintendo Switch product page. Few other details were provided but we do know it’s based on a custom Nvidia Tegra processor, and it should be available in March 2017. It turns out Aikun is already selling a similar concept with their Morphus X300 game console, available on Amazon.co.uk for 299 GBP, and slated to ship next month. 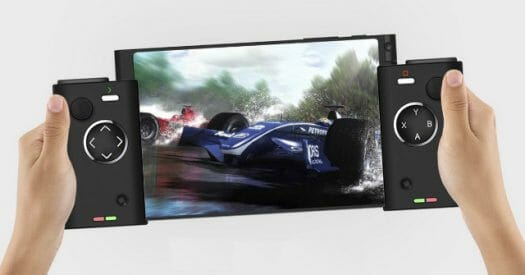 Gaming performance should be much lower than Nintendo Switch but still enough for many Android games, and it incldues a glasses-free 3D display too. Morphus X300 specifications:

The game console runs Android 5.1.1, and ships with the two controllers, a travel adapter, a micro USB cable, and a Quick Start Guide.

Charbax interviewed the company a few days ago, where you’ll find a demo of the system in the video below.

Aikun Morphus X300 will also soon be available on Amazon US for $249, Amazon Europe websites for 249 Euros, and Amazon Japan for 28,999 JPY. More details can be found the product page.

In the video they mention working with Allwinner, but on what part who knows?

There have been at least two tablets with built on controllers on sale in UK before, but did not catch on. Wonder if removalable controllers catches on? Price wise buy a xbox 360 and no need to keep charging battery.

I remember the wikipad, they were heavily discounted by retailers to shift their remaining stock.

Why would you even waste that much money on that garbage.

Nintendo has far better quality hardware and most important of all content worth paying for compared to the dumpster that is Google Play.

If you really need a controller you can just buy one for your existing phone/tablet.

The switch was derived from the Nvidia Shield concept which Nvidia couldn’t really deliver on, a single hardware platform that covered handheld, tablet and set top box. Nintendo looked at it and said we can do that which is why Nvidia is so heavily involved.

they need the Windows version,i was the only person to support their campaign with $1 to make some comments,i want this device becuse beside for the old SOC, the look is like very well build and design and i do like 8 inches tablet form factor,i did already backed the Smach Z campaign,but i will get this one for sure

@Dan
Nintendo is another propietarie league no comments

How good is 3D without glasses? Did someone have a screen in this size with this feature??

I like to have two 2.4 GHz controllers witch can be used for each hand, not like standard gamecontrollers with a handle like “to pray in the church” -sorry my english is not the best-. I think combined with a wireless mouse, it would be more comfortable for long playing in the bedroom. If there are similar controllers available, in middle cost area, please let me know.

He pointed only concept lol

Where does the sd card go?