I first discovered Shenzhen Tomato’s ONENUTS brand through ONENUTS T1 3-in-1 projector, tablet, and mini PC, but the company has now launched a new product with ONENUTS Nut 1 Android TV box powered by Amlogic S912 processor, and the usual 2GB RAM and 16GB storage, but the product stands out a little thanks to its presentation as we’ll see below.

The technical specifications are pretty much standard:

The “Nut” runs Android 6.0.1 with Kodi 16.1. By the way, if you find the name ONENUTS a bit funny, or grammatically challenging, once you come to know LAPUTA brand (Spanish speakers will understand best), ONENUTS becomes not that bad after all…

There’s no box, so I can’t do an unboxing, but there’s a bag, so let’s do an unbagging 🙂 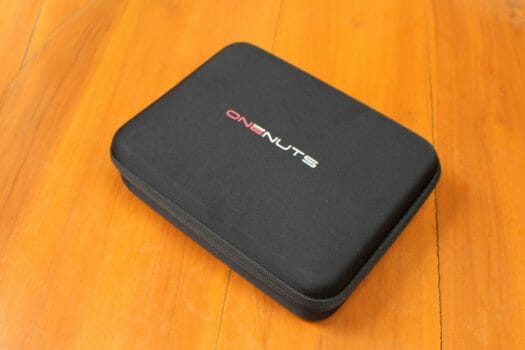 The bag is very similar to your typical Toiletry bag, and opens via a zip.

Beside the device, we’ll find a 5V/2A power supply, an HDMI cable, an IR remote taking two AAA batteries, and a user’s manual in English.

The device looks a bit similar, but at unbagging time, I could not find out similar to which device… Nevertheless, the blue TV box comes with status and net LED and an IR receiver window on the front panel, two USB ports and a micro SD slo on one side, and the remaining ports can all be found in the rear panel with the WiFi antenna, optical S/PDIF, AV and HDMI outputs, a Gigabit Ethernet port, and the power jack.

I had to take out the four rubber pad on the bottom of the case, and loosen four screws in order to open the device. 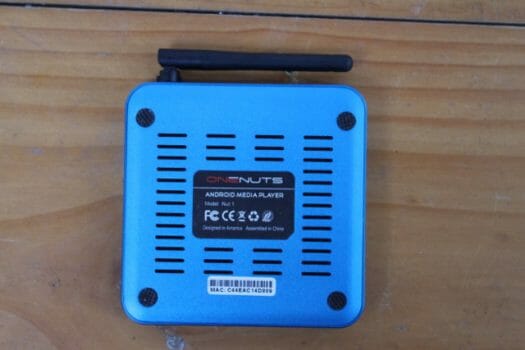 The bottom of the board comes with two NANYA NT5CB256M16DP-EK DDR3-1866 SDRAM chips (1GB), as well as a sticker with aMAC address starting with C44EAC which belongs to Shenzhen Shiningworth… So we are getting closer…

The components are also all the same, with two more NANYA RAM chips bringing the total to 2GB, a 16GB Samsung KLMAG2GEND-B031 eMMC 5.0 flash capable of achieving 250MB/s read speed and 50 MB/s write speed in theory, as well as 6000 random R/W IOPS, PPT 1608 PM44-11BP transformer for 10/100M Ethernet, Ampak AP6255 module for WiFi 802.11 b/g/n/ac and Bluetooth 4.0 LE connectivity, and DIO1233 audio driver.  The only real difference I can see is that they used a different kind of thick thermal pad, that feels like a gummy bear or jelly at the touch.

I’d expect the firmware to be similar to what I found in M12N box review, but possibly with a different launcher, and several bug fixes since it’s been over two months since I completed the review.

Resellers and distributors interested in this product can purchased directly in quantities from Shenzhen Tomato, while individual can buy the device on Amazon US for $129.99 US, or Amazon UK for 129.99 GBP.

They could be cycling fans. Go Lance!