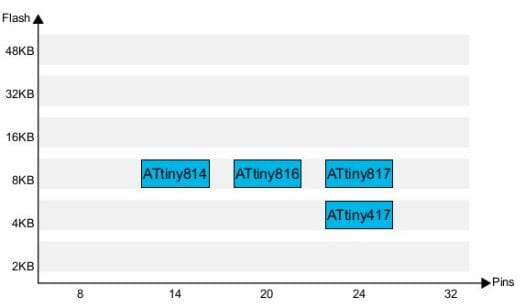 “Core Independent Peripheral” is pretty much self-explanatory, but Microchip description can be useful nonetheless:

CIPs allow the peripherals to operate independently of the core, including serial communication and analog peripherals. Together with the Event System, that allows peripherals to communicate without using the CPU, applications can be optimized at a system level. This lowers power consumption and increases throughput and system reliability.

The new MCUs will be supported by Atmel START, an “online tool for intuitive, graphical configuration of embedded software projects”, as well as Atmel Studio 7 software development tools. You’ll be able to experiment pretty quickly thanks to ATtiny817 Xplained Mini Kit with a micro USB port for power and programming, a button, and access to all I/Os from the MCU. The board is also said to be compatible with Arduino ecosystem. 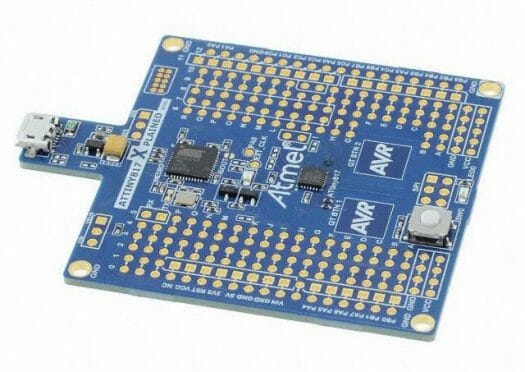 The new 8-bit tinyAVR MCUs are available now in QFN and SOIC packages with pricing starting at $0.43 for 10K units. Xplained Mini Kit can be purchased for $8.89 on Digikey. Visit Atmel tinyAVR product page for full technical details about the new MCUs.

Something similar already existing in NRF5 chips from Nordic Semiconductor’s

So what is the “Custom Logic” supposed to do? I se a “CCL” block on the diagram that references LUT I/O. So there must be some sort of Look-Up-Table fabric on-die, but there’s no further mention of it in the article. How big is it, who can program it, when can it be programmed, is it OTP or MTP, is there a separate PLL/Clock for it?

@Drone
According to the Microchip/Atmel website, the CCL is some kind of tiny “glue logic” block. I’m currently downloading the “small” (596 pages!!!) preliminary datasheet. The ATtiny817 looks like it could be a lot of fun to play with.

If it would has competitive price with the STM8S003 I would be very happy, but not :(.

So XMEGA are dead 🙁

@Molux
Yeah, they were DOA basically it seems.

PIC32 MX and the new MM series look really awesome though… far better than the 8bit AVR chips I’ve been using which are good but pale in comparison in many ways.

Sure they could still be improved but PIC32MM looks to be very good to me at the moment as well as the cost being pretty low.