Here comes one more LoRa board to play with. Badgerboard combines an Arduino compatible Atmel/Microchip AVR MCU with a Microchip RN2483 or RN2903 module in a breadboard compatible board powered via  micro USB port or an external battery. 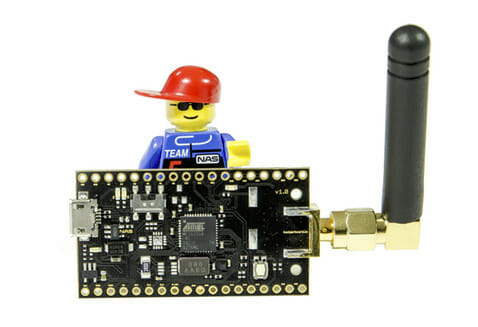 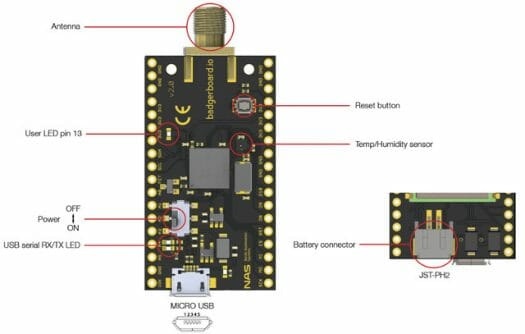 The board can be programmed with the Arduino IDE and “tested and verified libraries for LoRaWAN communication”. You’ll find some code samples and libraries, pinout diagram and the board’s datasheet on Badgerboard.io website.

Nordic Automation Systems (NAS), the company behind the project, has experience with other wireless products based on Bluetooth Low Energy, ANT+, and IEEE 802.15.4 based protocols (6LoWPAN / ZigBee), and launched the project on Kickstarter aiming to raise 135,000 NOK (~$15,800) to fund mass production. Early bird rewards start at 365 NOK (~$43) and include the board, female and make pin headers, and an SMA antenna. Other rewards including multiple quantities of the basic kit, some kits with extra external sensors, up to Badgerboard Megapack for 5x boards with antennas, an outdoor gateway and 1-year NAS IoThub service for 12,270 NOK (~$1440 US). Shipping is included in the price, and delivery is scheduled for December 2016/January 2017 depending on the reward.

Nice looking board. Cheaper than the crazy over-priced Marvin, but at $43 each I think they still cost too much. Remember, you need at least TWO of these boards to communicate. Dropping the sensor will only save a $2-$3 USD per board at retail, and the antennas dirt cheap as well. For experimentation get a couple of RN2483 Modules online for$14 each and break them out yourself. Everyone has a box of cheap Arduino clones kicking around already anyway.

As others have said, the various IoT ‘RF-modems’ on offer seem way overpriced for 1 per IoT node. I see this one have included a sufficient variety of I/O types to not require a separate SBC, but for a presumably v. low-power module, still makes for a very expensive IoT node. @cnx Traditional carriers provide a network coverage page, where you just enter a postcode and it shows data on service connection at that location. Do you know if there are websites showing similar coverage data, and monthly or annual tariffs for low data-rate private customers using LoRa for UK… Read more »

@paul
@cnx In case above post not clear: its in context of how one can economically access a private IoT system via www, as paying for a traditional internet account at an unattended location 365days pa, where the only communication required is to read, and maybe control, datalogging, perhaps in region of 100bytes per day, is quite uneconomic.

@paul
I guess in many locations you’d have to make your own private network.
About coverage, I could only find a few maps:
http://ttnmapper.org/
https://www.thethingsnetwork.org/community