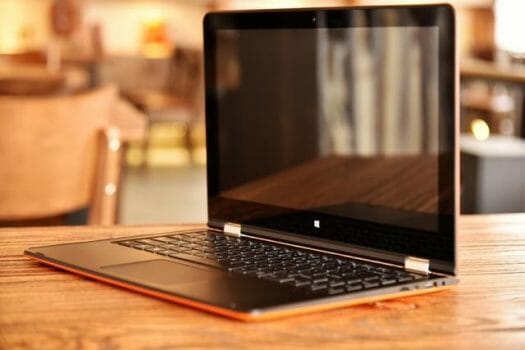 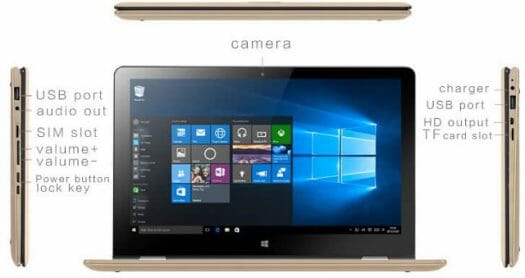 The laptop will run Windows 10 Home, and ship with a power supply and a user’s manual. The laptop appears to be inspired from Lenovo Yoga models, with the expression “YOGA 2-in-1 tablet” being used in the marketing documents, and the hybrid laptop also supports tablet, tent, and stand modes. A SIM card slot is mentioned in the specs and GeekBuying blog post, but somehow 3G / 4G LTE connectivity is not discussed at all anywhere, and it is stated that “this machine has a SIM card slot, but it does not support SIM card to surf Internet or make phone call.”

GeekBuying has started to take pre-orders for $299 including shipping, with delivery scheduled in about 40 days.

“This machine has a SIM card slot, but it does not support SIM card to surf Internet or make phone call.”

Says so in on the Geekbuying page. It seems the 3g/4g card is optional ( probably a mini PCIe card of some sort ).
To be fair I think a USB stick is a much better option because you can actually swap that one out and replace it with whatever your mobile operator provides you with.

damn, again i traveled back in time 😛

@TC
You can put a bigger one in but for a basic OS and some stuff it’s more than enough. You could leave some of the things in the cloud I suppose or just get an extra 64 GB cheap SD card.

Puppy and Damn Small Linux proved you can fit a desktop linux distro in 128mb. You can start off slackware or openwrt if you don’t want to go LFS.

Ah lol. Sorry, I misread that to be 128 GB 😀 That’s probably what it was meant to be.
But yes, puppy Linux would probably work with that.
Even it were 128 MB that’s enough for a basic boot partition ( UEFI fat32 ? ) I suppose and you can put a SSD or fast SD card and put the OS there.

“this machine has a SIM card slot, but it does not support SIM card to surf Internet or make phone call.” … so what is the use case then? Identification of the device/user via the SIM?

I really don’t understand why there is 32GB eMMC flash, since the hardware is capable of M.2 SSD, 32GB of eMMC flash, install OS on it ?

@TH
Because if you put the OS on 32GB of eMMC, Microsoft gives you a huge discount on the OS for these types of machines (certain screen size and CPU combo).
The machine does in fact have two M.2 slots, one seems to be a 2242 and the other 2260.