Intel has just introduced their Compute Card, the name likely originating from their Compute Stick & Module series, integrating all main components you’d find in a computer such as a processor, memory, storage, and wireless connectivity into an standardized ultra thin business card sized module that can be used in compatible devices from smart kiosks to security cameras and IoT gateways, as well as computers and laptops. 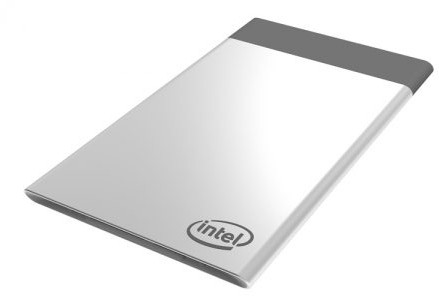 Intel has some demos at CES 2017, but has not announced any specific models yet. We still have some of the key features for the Compute Cards:

It’s not the first time company have created compute module for upgradeability and modularity, as with, for example, EOMA68 CPU card going into a mini computer and laptop, just like BBC demo of Intel Compute Card below featuring Core-M processor.

Intel is now working with early partners such as Dell, HP, Lenovo, Sharp, and InFocus to develop products taking Compute Card. More details, including pricing, will be made available in Q2 2017 just before the Compute Card and compatible devices should start to hit the shelves around the middle of the year. You’ll find a few more details on Intel’s Compute Card product page and press release.

So, we’re finally doing the laptop with pluggable CPU so updates are easier? I would love it. But, the people who make laptops–and who wouldn’t need to make as many with this scheme–won’t like it, so what’s in it for them to buy into their concept?

I like the idea of a tv becoming a dumber device and putting all the intelligence into a card. It means you can buy the best screen and choose what sort of operating system and experience you want.. I hope Apple, Amazon and Google jump on board, so you can have Apple tv, Android tv, kindle or windows.. or roll-your-own like Linux with Kody.

@Paul Mansfield
I hope this becomes reality too, but it’s unlikely that the TV makers will be able to agree on a unified connector, so you’ll end up with Samsung, LG, Sony, Toshiba etc. cards that only works with their TV’s…

@Paul Mansfield
Xiaomi’s TV are going that way, as they separate the display and the main electronics with an extra box, allowing for extra thin TV (4.9mm+). Using such type of module would even go further in modularity/upgradeability.

What is the deference between Intel Compute Stick and this Card. Simple… lack of IO ports. So what Intel want to do with this product, they want to sell us a dock station or a tv with special slot. Bummer, just like apple did with the new laptop, they did put new form factor usb and start selling dongles, apple had removed stereo jack from new iphone and start selling expensive headphones 🙂 I cant see nothing revolutionary in this card but revolutionary restriction. If somebody have a chance to tear down a modern laptop/netbook for example Acer Aspire ES1-131,… Read more »