New smartphones used to bring lots of new useful features and innovations a few years ago, but as new device releases has become much less interesting in recent years with the most interesting recent features probably being dual rear camera systems, and fast charging.However, Changhong H2 Android smartphone is integrating a unique feature thanks to SCiO molecular sensor allowing the device to detect materials. 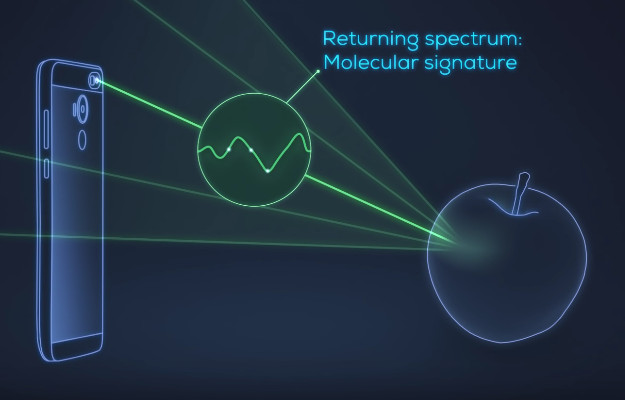 The rest of the specifications are pretty standard with an octa-core processor clocked at 2 GHz, a 6″ full HD display, a 16 MP rear camera with autofocus, a fingerprint sensor, and a 3,000mAh polymer battery. There’s also a special physical button to extend battery life & clear memory.

The smartphone molecular sensor works by emitting lights and analyzing the reflected light spectrum. This enabled the smartphone to scan your food and for example detect the type of fruit you are holding in your hand, as well as estimate the caloric or sugar content in your food, report your skin’s moisture or body fat, and so on. It can also detect fake medicines such as fake Viagra pills. However, it won’t be able to detect fake gold, as the sensor does not work with metals since they reflect all light.

The phone will sell in China later this year for 2,999 RMB (~$433 US), but if you don’t happen to live in China, you can register your interest to be informed when the phone launches in your country. If you are interesting in material sensing in a phone, but are interested in the technology, SCiO handheld scanner with support for iOS and Android smartphone is for sale for $299, but if you want to develop your own app or molecular sensing models, you can get the same scanner with the SDK for $499. The sensor was actually launched in a Kickstarter campaign in 2014, but some people have yet to receive theirs, and some report it’s not quite working that well.

Next, it will be a phone with Geiger Counter, to measure how our brains are mutating.
(maybe useful in Japan)

No details regarding the working principle of sensor. Any inputs?