Xiaomi 720p and 1080p IP cameras include night vision, motion detection, WiFi connectivity, and can save videos locally, and send them to a cloud server in China for you to check your camera from anywhere. The 720p camera sells for about $50, while the 1080p camera goes for around $30 on GearBest and other websites, but comes with less IR LEDs and no optical zoom. [Update: The black version of the 720p camera goes for $29.99 on Amazon US] 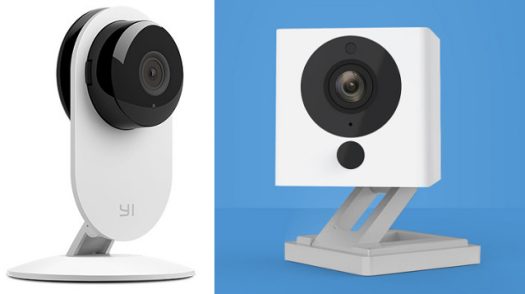 They works fine, but you need a specific mobile app to configure and control the camera, and if you’d rather not have the videos streamed to some server outside of your local network, github user “Fritz” has developed a set of scripts for the camera to disable cloud service, run a standard RTSP server, as well as HTTP and FTP servers on the camera.

He did his work on Yi Ants Camera (720p), but other members of the community have been helping, and some are currently working on supporting the cheaper 1080p model. The RSTP server is now working on the 1080p. However, everything is still working in progress, and you may want to join the fun on github, but if you want an easy to use SD card image this will take a little longer. The camera and corresponding hack are also being discussed on HotUKDeals.com.

Thanks to Rob for the tip.

“There is no login and password and currently no way to set it.”

The camera is in your LAN, security is less important, for WAN access a reverse proxy can secure it

Does anybody know if the timezone problem has been fixed?

@Jean-Luc Aufranc (CNXSoft) – wow that was quick ! @abc what is that related to specifically? @animtakhne this was mentioned in the 1080p hacking thread “@GB505 ntpdate is already available but there’s no zoneinfo. You need to specify a timezone-offset (from China I believe) in /etc/TZ. I’m working on a script to automate it.” if that’s what you mean. Personally I like the option of either running the official cloud/app based service or just locally as it gives people choice. For me I want to control the security of the devices on my network and stop them punching holes in… Read more »

Maybe use “Modified” instead of “Hacked” next time, at first read, I had the impression those network cameras were hacked again for DDOS purposes 🙂

zoobab :
Maybe use “Modified” instead of “Hacked” next time, at first read, I had the impression those network cameras were hacked again for DDOS purposes

Agreed — thought they got hacked again.

Getting a full open source firmware image would make this insanely popular.

@ee I’m waiting on one of these to get something like openwrt ported to it. I have some Foscams, and they’re great but there’s changes I’d love to make to them but can’t. For one thing, those cameras have to be used with IE to view the feed or make some changes in a web browser. Firefox/Chrome won’t show video or even all of the settings you can change. It uses an ActiveX control. That’s silly in these days when HTML5 could be used to replicate any features that needed ActiveX to run. There’s a Raspberry Pi with a Pi… Read more »

The 720p camera is $30 on Amazon all day every day.. I have five of them, all “hacked” with this firmware to remove the cloud features and just enable RTSP.

I think there is a major error /misleading in the article (about line 5), this camera’s have NO OPTICAL ZOOM at all !!
Just even mentioning ‘zoom’ is misleading.

What I read on this amazon links, all have 4X digital zoom. Which is useless.

Which is basically quite right, the higher resolution needs more light.

I tried to block all outside traffic of cameras by blocking these camera IPs in my firewall. But then I noticed that when internet connection is blocked, cameras stop recording videos on SD cards (happens after few hours) Have any one faced this issue?

@Prashant
Have you already run the scripts to disable cloud service?

No, I did not disable cloud service, I just blocked internet access to camera ip in my firewall. Next week I am planning to try disabling cloud service.

@Jean-Luc Aufranc (CNXSoft)
Not yet, i did not try this script. I was trying to block complete internet access for cameras. I am not sure how much we can trust such chinese cameras in terms of security over internet.

Where can i find a user friendly guide to enable SMTP server and disable cloud service?