MYIR Tech has released MYC-JA5D2X system-on-module powered by a Microchip Atmel SAMA5D2 ARM Cortex A5 processor with 256MB flash, and 256 MB DDR3. The module relies on a SO-DIMM edge connector to expose the camera interface, Ethernet, USB, camera, and other I/O signals.

The company provides Linux 4.1 for the module. MYC-JA5D2X SoM is very similar to the company’s MYC-JAD5D4X module launched early las year, except it’s using the more power efficient SAMA5D2 processor instead of a SAMA5D4 processor clocked at 600 MHz, and they have reduced costs by lowering the default amount of storage and memory. 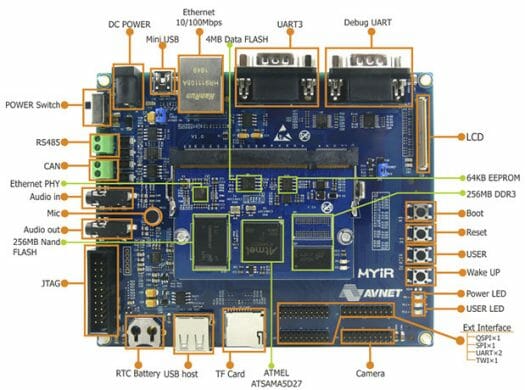 MYC-JA5D2X system-on-module sells for $49 with ATSAMA5D27 processor, while MYD-JA5D2X development board goes for $129 as part of kit that also adds a power adapter and various cables. More information about both products can be found on MYiR Tech website.