Most Apollo Lake mini PCs on the market ship with 4GB RAM, but if you find this limiting, Beelink AP34 Ultimate, powered by an Intel Celeron N3450 quad core processor, comes with 8GB DDR3 memory and 64GB eMMC flash. 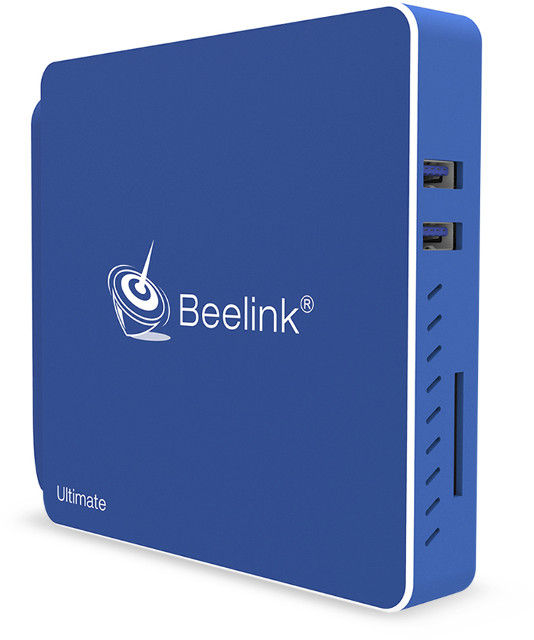 Beelink AP34 Ultimate runs Windows 10 Home 64-bit. That’s an update to the company’s Beelink AP34, and based on the same design as Beelink AP42 that we reviewed with Linux earlier this year.

The device is sold on Amazon US for $249.99, and they now have a promotion in Europe until July 16th, where the mini PC is sold for 239.99 Euros instead of 289.99 Euros on Amazon FR and Amazon DE. But a potentially cheaper way, depending on potential custom duties, is to get it on Aliexpress for around $216.99 shipped. Please note that they are two version of AP34:

If you check some other Aliexpress sellers, they will sell AP34 with 8GB (title) for just $169, but the description shows everything with 4GB RAM, and the price does not change whether you select the Grey or Blue (Ultimate) version of the device, so it’s likely the price for the original A34 model only. So be careful, and ask the seller first in case of doubt.

Thanks to Linuxium for the tip.

They also have a 8GB RAM version there for $183 shipped with DHL.

@stephl
Interesting… they lowered the price further in Germany, but not in France (yet).

The old AP34 and AP42 are no longer available at gearbest – they stopped being available a few weeks ago (maybe two months). So I wondered why. I guess they were working on this new “ultimate” version.
And I wonder whether the RAM size is the only difference from the old version?

This company just seems a bit dodgy in this regard. For starters, why 2 different web addresses and identities?

Drivers don’t seem to be readily available for some of their products. If you can’t easily do a full OS wipe and re-install, that points toward a disposable product.

@Ron,
a month ago I asked Beelink about AP42 (un)availability, their answer was:
“Regret that AP42 has stopped production. And AP34 will be upgraded to 8G.”

@jqpabc123
Shenzhen AZW Technology is the company name, Beelink is like a brand name.
I think they do OEM business with the former, and sell direct to end user with the latter.

@Jean-Luc Aufranc (CNXSoft)
They could easily give both their identities a boost simply by making drivers and OS images readily available for download and re-install. It should cost them next to nothing. As it stands, Voyo has a significant marketing advantage in my opinion simply due to this.

The big question is: 8GB are dual-channel ?

@Massimo Olivieri
That’s a good question! Dual-channel could improve the performance very much!

hey guys do someone has an idea….

nano receiver of my Logitech mouse and keyboard doesnt recognized by the usb 3.0 ports.

On my laptop with usb 2.0 works everthing well.

Logitech says plug and play. But nano receiver dont works with this machines because of usb 3.0.

@Sonya Mihaylova
One ugly solution could be to use a small USB 2.0 hub.

can someone confirm this problem with nano receiver?

I’ve received the SSD and I’m trying to install it.
I removed the 4 external screws, plus the additional screw on the PCB but I’m unable to remove it.
I must be missing something any idea – so sad there is no manual for installing an SSD.
Picture : https://ibb.co/gLWZok

@stephl
Looking at the picture there are still two (2) more screws to undo/remove (top rightish, bottom middleish). You will then be able to lift out the motherboard but be careful not to loose the power-button which is loose and also be careful of the two wifi antena wires which will still be attached from the motherboard to the base.

Massimo Olivieri :
The big question is: 8GB are dual-channel ?

@Ian W MORRISON (Linuxium) : thanks a lot ! I guess I must buy glasses 🙂