All Rockchip RK3328 based 4K TV boxes I’ve seen so far come with Fast Ethernet, not Gigabit Ethernet, with the exclusion of Rock64, which is not a TV box, but a development board. But Nagrace sent me Bqeel MVR9 box that comes with Gigabit Ethernet, in order to write a review. I’ll start by having a look at the hardware first, before experimenting with the firmware in several weeks.

The box runs Android 7.1.1, and the company told me YouTube 4K is supported, they added support for DRM (but only Widevine Level 3 for now), and BD ISO  & 3D Blu-ray can be played in RKMC.

I received the device in a black box reading “Smart Your TV, Color Your life”. 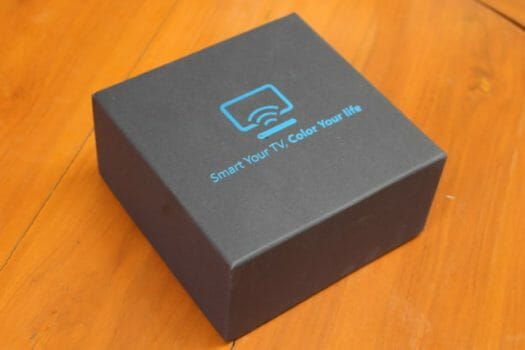 The box comes with a 5V/3A power supply that should be enough even if you connect a USB 3.0 hard drive, a male to male USB cable (for firmware recovery), a HDMI cable, an IR remote control, a TV box user manual, and remote control user manual.

The box is made of plastic with the power button on one side, the AV port, recovery pinhole, micro SD card, a USB OTG port, and USB 3.0 port on the other side.

We’d normally open the box by loosening some screws hidden under rubber pads, but there’s nothing there. 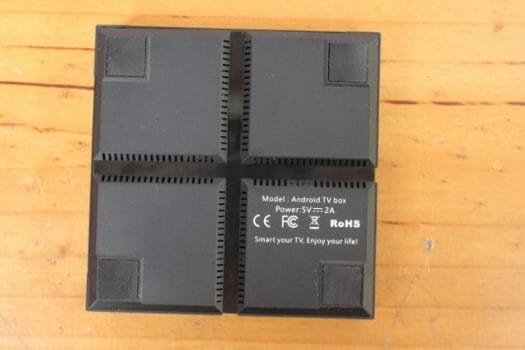 So instead, I just had to unclip the bottom cover. There’s not much to see on that side of the board, except the sticker that reads TRN9-V10 2G+16G. So I loosened four screws to completely take out the board of the case. 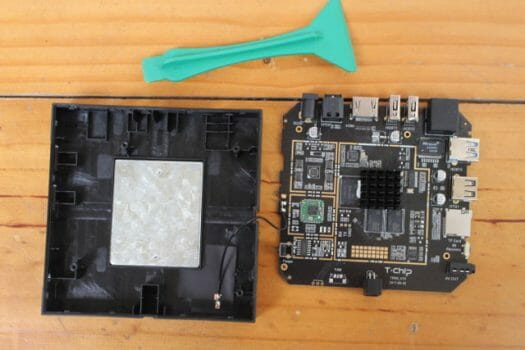 We can see two methods use to keep the box cool. First a black heatsink on top of Rockchip RK3328 processor, and a thick gray plate on top of the box.

The board appears to have been designed by T-Chip, which should be the same company that makes the Firefly boards. The processor is connected to one 16GB Samsung KLMAG1JENB-B041 eMMC 5.1 flash that in theory delivers 285/40 MB/s sequential R/W speeds, and 8K/10k random R/W IOPS, as well as two Samsung K4A8G165WB-BCRC DDR4-2400 SDRAM chips @  (2GB in total). So the company has used some pretty decent storage and memory chip in the design, which should help with performance. They coupled a Realtek RTL8211F transceiver with Mnova MS0860 transformer for Gigabit Ethernet, and use Realtek RTL8723BS module for wireless connectivity (802.11 b/g/n WiFi + Bluetooth 4.0 LE).

Other notable chips include Rockchip RK805-1 PMIC, FE1.1s USB 2.0 hub, and TI DRV632 stereo audio line driver. We’ll notice a 3-pin header on the bottom left of the board which should be an alternative location for the IR receiver, and close to it a footprint to connect a fan. The UART debug interface is clearly marked with RX, TX, and GND, but not the most convenient, as you’d need to solder wire to solder pads.

I’d like to thank Nagrace for sending the review unit. There’s no product page, no price info right now.

Interesting, but there are an ocean of Android TV boxes available with S912 getting cheaper with time. Also ROCK64, even though a dev board, is very competitively priced (yes, without eMMC etc) and we can even get the 4GB RAM version for a good price!
This one must be priced really low to be competitive.

@Fossxplorer
One advantage of RK3328 over S912 is the USB 3.0 port, so if you plan to use the box to store data, you are not limited to 35 to 40 MB/s transfer rate. I guess it would be possible to get close to 90MB/s with RK3328 transferring data from USB 3.0 over GbE with protocols like FTP.

Would be nice to test also with use of external usb gps receiver and apps to pass gps on to navigation apps. Thusfar this has been dissapointment on the android boxes. Apps like You are Here, gnss commander, and for navigation the app navigator from mapfactor.

@Jean-Luc Aufranc (CNXSoft)
With either Windows Explorer (SMB with at least Windows 7) or macOS Finder (AFP or SMB, somewhat decent macOS version) you’ll get most probably 110 MB/s with GbE equipped RK3328 devices if ‘USB Attached SCSI’ can be used for USB3 storage and settings match (Ethernet and USB3 IRQs have to be processed by different CPU cores and RPS — receive packet steering — is needed).

Unlike most FTP clients Windows Explorer and Finder use some tricks to fully saturate Gigabit Ethernet connections. Anyone interested in details should do a web search for ‘helios tech info #157’.

S912 do have its advantage, but it can not play high bitrate videos.

RK3328 as a new chipset, the VPU performance improved a lot, as a media player, RK3328 is a good choice. specially Rockchip improved the media center(player provided by Rockchip), it can play almost all the formats, 4K, BD-ISO, HDR, 10Bit….. (USB3.0 supports the video play very smoothly)

Sorry but that info is just plain wrong.

Its ARM Mali-T820MP3 GPU is noticeably quicker navigating a GUI than the ARM Mali-450MP2 GPU as well.

We have not even started talking about Kodi Krypton compatibility yet with Android 7.1 Firmware….