Many low power mini PCs equipped with Intel Bay Trail, Cherry Trail, Braswell, or Apollo Lake processors have been launched over the years, but most of those come pre-loaded with Windows 10, and many readers of this blog prefer to run a Linux distribution. It’s usually possible to install Ubuntu by yourself, but not always, and when you buy a Windows 10, this increases the price by several dollars (around $20). The ideal case would be to get such low power, low cost mini PCs pre-installed with a recent version of Ubuntu, without having to worry (too much) about hardware support, nor having to pay the “Windows tax”. MeLE used to sell Ubuntu mini PCs on Aliexpress, but sadly not anymore, so I went to Aliexpress to look for those Ubuntu mini PCs, and BBen offers three operating systems options for some of their systems with “Windows 10 Activated”, “Windows 10 pre-loaded” and “Ubuntu”. 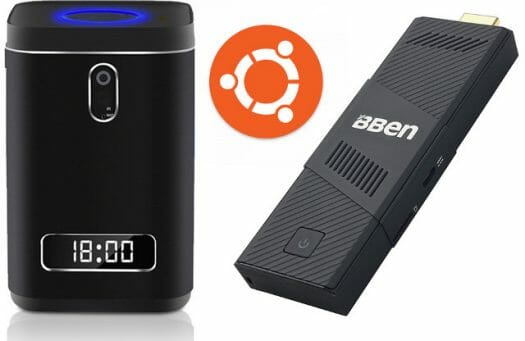 The last two options have the same price, and the “Windows 10 Activated” adds $17 for the discounted Windows 10 license. I found two such models with an Ubuntu option: MN-C200 mini PC (left) and MN9 TV stick (right) powered by Intel Atom x5-Z8350 Cherry Trail processor starting respectively at $148.99 and $97.99 including shipping with 2GB RAM and Ubuntu, but you can also select 4GB RAM model. I could not find any more recent Apollo Lake models sold with Ubuntu pre-installed on any Aliexpress sellers. BBen does not specify the Ubuntu version used, so I asked for that information for the MN-C200 model, and the answer is somewhat perplexing at first:

It is 16.04 Ubuntu version.
But we don’t suggest the Ubuntu system. because you couldn’t adjust the time after we have set it well for you. Please know that.
We also have another mini pc that supports Ubuntu. You could have a look.
https://www.aliexpress.com/store/product/Newest-BBen-Mini-PC-Stick-Windows-10-Ubuntu-Intel-Z8300-Quad-Core-2GB-32GB-4GB-64GB/2659132_32757157813.html
Thanks for your work and understanding. Any other question or anything I could do for you, just contact me freely. I will do my best to assist you.

The good news is that Ubuntu 16.04 is installed, but somehow it’s not possible to adjust the time in MN-C200, while it’s no problem with MN9 TV stick? I guess they mean the front panel clock display shown in the top photo does not work in Ubuntu, which may not be a big issue.

I continued searching for other Ubuntu computers up to $150, and many sellers are using “Ubuntu” are a SEO word, just to indicate that you could install it yourself, and/or get more traffic to their page. The only other alternative I found was MeegoPad T02, but it comes with an unsupported Ubuntu 14.10 version. The only advantage is that it’s quite cheaper than BBen MN9 at $80.84 shipped. So overall the choices are extremely limited, if you want a computer pre-installed with Ubuntu.

If you search on aliexpress with pfsense You also get some interesting hits.

For anyone who doesn’t know this already, Ian Morrison at http://linuxiumcomau.blogspot.com/ has put in a ton of work to create a nice “respin” script, which will take several of the major variants (Ubuntu, Mint, Peppermint, Elementary), unpack the original ISO file and then re-create it with fixed bootloaders, updated kernel and additional drivers (ie:- Broadcom WiFi) to make it work with these Bay Trail, Cherry Trail and Apollo Lake devices.
Ian also makes some pre-spun ISOs available and from personal experience, I can say they’re definitely worth trying, if just to take the pain out of the 32/64-bit UEFI struggle.

@PuceBaboon
So i should be able to run Linux on “CHUWI HiBox Mini PC Android 5.1 + Window 10 Dual OS 64bit” thanks for linuxium’s work?
It seems to be a good Cherry Trail box with 4GB of RAM.

@Fossxplorer I’d say so. From a very quick scan of the Gearbest page, it looks to be almost identical to the unit I have (except mine only has 2GB of main memory). I’m not actually using Linux (and definitely -not- Windows), but the Linuxium respun ISO worked well for me in breaking out of the Windows-only UEFI boot loop and proving that the box could run a different OS. I’m very impressed with the price/performance of these little Atom boxes; so much so that I’m seriously considering one of the Chuwi 15.6 lapbooks (my old eyes need the larger screen)… Read more »

@Fossxplorer TL;DR Depends. Unfortunately Linux support for Intel Atom Bay Trail and Cherry Trail is still not guaranteed as not all hardware builds using these SOCs are supported by the mainline kernel and the distro’s userland. Besides the usual issues with wifi, bluetooth, audio from headphones and internal speakers (all dependent on chip specific support together with their specific implementation and BIOS configuration) tablets and laptops also have issues with touchscreen, backlighting and suspend/hibernation. Linux support is often a combination dependent on kernel support, userland for firmware, configuration and driver files and the BIOS. Furthermore establishing Linux support is made… Read more »

I am nowhere near as experienced as Linuxium on these things, but have attempted to get linux running on a Baytrail X3735F device, a Toshiba Click mini.
With these Baytrail SoCs, only with the latest 4.12 kernels are you likely to get most of your hardware working and even then may have to turn of higher cstates to make it stable.
Things are better with Cherry Trail, but I’d advise people to wait until a device in the form they want is available with an Apollo Lake SoC as these seem to run Linux much better.