I completed my review of MeLE PCG03 Apo mini PC with Windows 10 about two weeks ago, and at the time when I tried Ubuntu, all I got was a black screen. MeLE said they would release an Ubuntu image for the board soon, so I did not investigate further. The company has now released Ubuntu 16.04 Desktop ISO via a link on Twitter together with (partial) instructions, and the company told me another company had worked on the image. I sent the link to Linuxium, as in the past MeLE or that other company used his work without asking. I turns out the ISO was identical to Ubuntu 16.04 Desktop ISO released in April last year.

Anyway, I still got the black screen issue using that image, and that’s because I first failed to find the option in the BIOS to change boot to Linux. When the mini PC starts, press the Esc key to enter Aptio Setup Utility, go to Chipset->South Bridge, then OS Selection and select Intel Linux.

Interestingly, you can also select Android, Windows 7 (I doubt it would work), and MSDOS, probably meaning FreeDOS in that case.

Since nobody made any work to specifically add support to MeLE PCG03 Apo to Ubuntu, I decided to use a more recent Ubuntu 16.04.2 Desktop image LTS instead, and flashed it to a USB drive using Startup Disk Creator in my Ubuntu computer. If you are using Windows, you could go with UltraISO as explained in MeLE’s instructions, or Rufus instead. 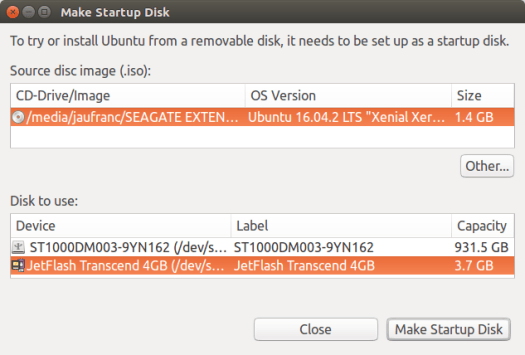 You can boot the drive either in Aptio Setup Utility, or by pressing F7 at boot time to enter boot device selection. In my case, I selected UEFI: JetFlashTranscend 4GB 8.07, Partition 1.

Shortly after I got the menu to try or install Ubuntu. I did not want to install it, as I would have probably had to reinstall Windows 10 after, since I won’t kept this mini PC, so I only tried it booting from the USB flash drive.

As you can see most features just work with the Ubuntu ISO released by Canonical. I tested audio with headphones and HDMI by playing YouTube videos in Firefox browser.

The file transfer problem with Bluetooth is likely a software or interoperability problem between my phone and Ubuntu, as I’ve had the same issue on other Ubuntu devices.

The eMMC flash is also recognized, so you should be able to install Ubuntu – and replace Windows – to the flash too.

MeLE PCG03 Apo is sold for $159.20 including shipping on Aliexpress.

It would be really nice if you included the output of the following commands:
lspci -nnk
lsusb
lsusb -t

With these anyone planning to use Linux could check for themselves for any possible troublesome hardware and get a basic idea of what is connected where.

@Jean-Luc Aufranc (CNXSoft) That’s great, thank you. As a linux user the things I look/wonder about when I see these boxes are things like this: – It seems the soundcard is a pci device, which is good and should work out of the box. – The emmc might be connected to 00:1c.0 SD Host controller [0805]: Intel Corporation Device [8086:5acc] (rev 0b) but I have no experience with these boxes so it’s just a guess. It probably just works which is good. – The SD Card reader seems to be a usb device, it’s unfortunate as that might not allow… Read more »

this bodes well for all the Apollo Lake based devices to run linux reasonably well.

For those that would be interested in going down the Linux route, when it comes to video playback, would it be fair to say that HD audio passthrough is unlikely to be available?

@PhilS
Dolby / DTS 5.1 pass-through is likely to work. It might be a better idea to use LibreELEC for that. Maybe the developers will comment on Apollo Lake support here.

Is there anything in the BIOS about booting from the m2 i.e. allowing dual boot of windows from emmc and linux on m2 ssd

@MH
I have not tried with PCG03 Apo, but I could do that with Voyo V1 VMac Mini with Windows 10 booting from the M.2 SSD, and LibreELEC from the eMMC flash: http://www.cnx-software.com/2017/01/30/how-to-install-libreelec-kodi-linux-on-voyo-v1-vmac-mini-apollo-lake-mini-pc/

So it’s likely to work on PCG03 Apo too.