Qualcomm officially announced they started sampling Centriq 2400 SoC with 48 ARMv8 cores for datacenters & cloud workloads using a 10nm process, but at the time the company did not provide that many details about the solution or the customization made to the CPU cores. 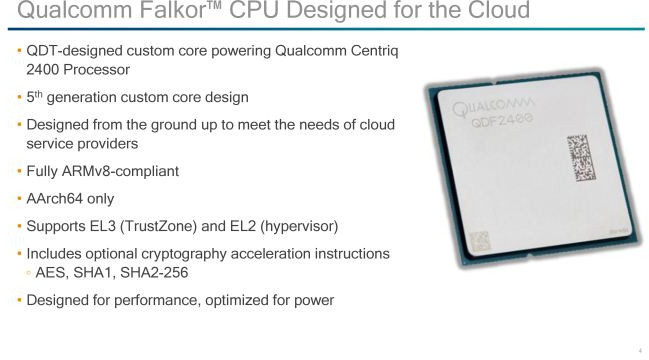 Qualcomm has now announced that Falkor is the custom CPU design in Centriq 2400 SoC with the key features listed by the company including:

Centriq 2400 SoC is scheduled to start shipping later this year. You’ll find an in-depth overview of Falkor micro-architecture, and more slides on Anandtech.

“Segmented ring bus” sounds like a latency optimisation over a classic ring bus. I’d love to see more details on the subject, though. I mean, a torus bus is a ‘segmented ring bus’ in a way.

That’s a machine! I’m really interested in the price. I guess it’s around 200 Dollar?!

no info yet on its power consumption…

it also seems qualcomm will support windows server with this soc

nobe :
it also seems qualcomm will support windows server with this soc

Any sources or information on this?