The AP34 Ultimate combines the passive cooling of an Apollo Lake N3450 SoC with 8GB of RAM and 64GB of storage in a small box form-factor mini PC.

Together with the device comes a pair of HDMI cables, a power adapter, VESA mount with screws, and a couple of leaflets covering basic information.

Not only does this device have three USB 3.0 ports, full size SD card, Gigabit Ethernet, headphone jack and HDMI port, it also has a (vacant) M.2 slot allowing additional storage with the full specification being: 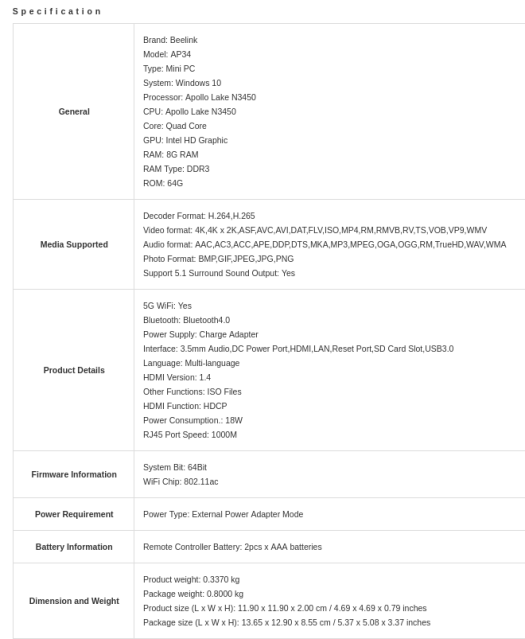 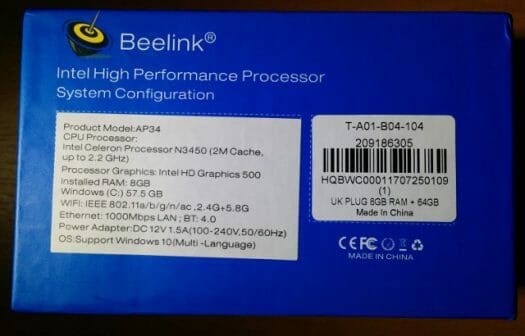 although there was no included remote control. 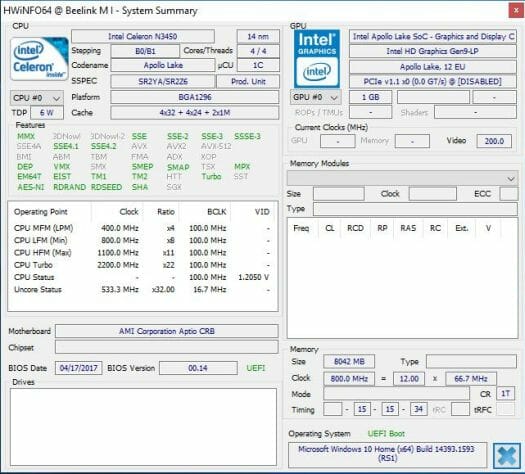 The device comes pre-loaded with activated Windows 10 Home 64-bit and plenty of available free space at (initially before updates) just over 43GB.
The Windows performance is unremarkable and the reason for this is obvious looking at the basic benchmarks. 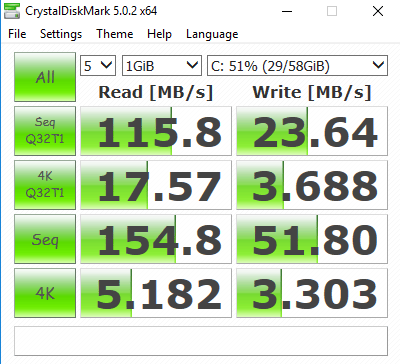 The reason being that the eMMC is slow which is disappointing for an ‘ultimate’ device. The eMMC chip is a Toshiba THGBM5G9B8JBAIE 64GB eMMC version 4.41 which used the HS200 interface.. 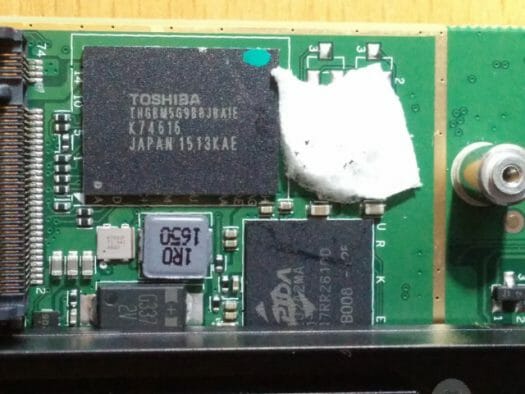 … compared with other devices like the Beelink AP42 whose eMMC (Samsung KLMCG4JENB-B041) is version 5.1 making use of the faster HS400 interface.
Installing Ubuntu as dual-boot is now much simpler as my updated ‘isorespin.sh’ script includes installing the rEFInd bootloader which enables booting on Apollo Lake devices when the BIOS doesn’t support Linux. Performance is again as expected given the limitation of the eMMC. 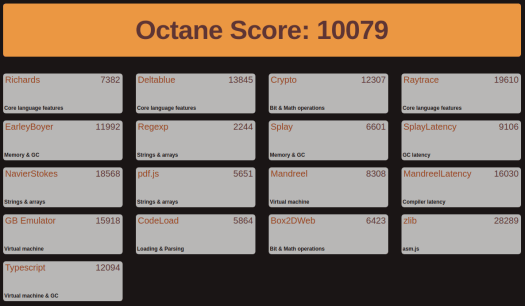 Looking a key features in more detail the first point to note is that the BIOS is simplified with no access to features you might want to control in an ‘ultimate’ device
The CPU is a quad core Intel N3450:
Shell
and memory is dual-channel DDR3 1600MHz:
Shell
Networking is Gigabit Ethernet and Intel 3165 (ac) wireless:
Shell
and audio is available through HDMI and headphones
Kodi plays 4k video but however 8K is unwatchable 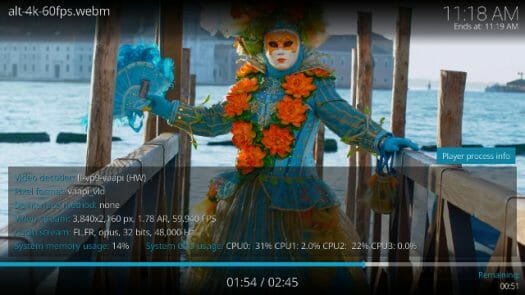 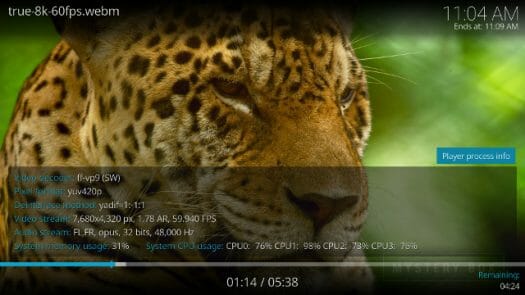 Both internal and external temperatures are fine under load:
So what are the advantages of having 8GB RAM? Well it means the device works better as a mini PC, as it means you can use more memory-hungry applications like browser tabs. As an example I fired up twenty Chrome tabs in Ubuntu
I was going to fire up twenty more but while I was refreshing each tab to make sure I used the most memory Chrome crashed. 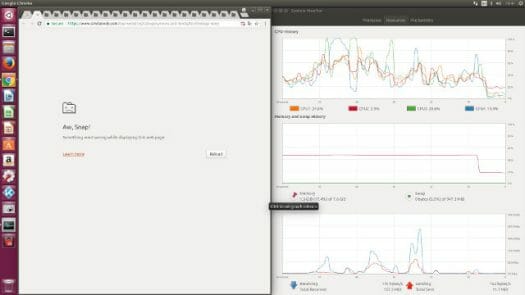 However as I hadn’t run out of memory I decided to try with Firefox. Having opened forty tabs in Firefox, I then refreshed the previous twenty Chrome tabs. Everything was now working fine and I was hovering around the 7GB RAM usage with the temperature stable at 61°C
Shell
But what use is a device with slow storage? I re-read the license leaflet that came with the device:
and checked the license using ‘slmgr -dli’ which confirmed I had an activated ‘RETAIL’ license. As the device has 8GB RAM and 64GB storage, I can only assume that the device has a full Windows 10 license which means I should be able to use the M.2 drive as the Windows drive. So in theory if I used a small M.2 drive and installed Windows it should then automatically activate as the product key is held in the BIOS.
First I had to install the M.2 drive. This involves prising off the four rubber feet on the base of the device, unscrewing the four screws that are revealed, and then forcing off the base plate which is somewhat stuck to the motherboard by a thermal pad. 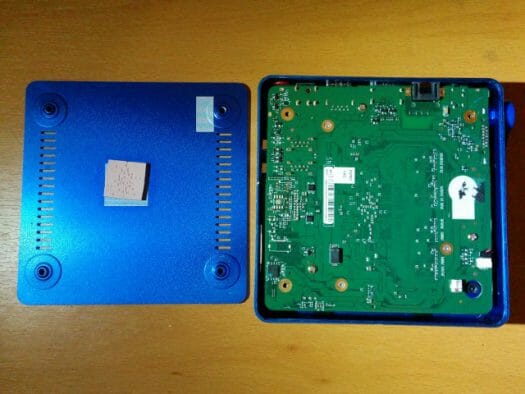 Then unscrew the three screws that secure the motherboard to the case and gently lift out the motherboard being careful not to loose the power-button which is now loose and also not ripping off the two wifi antena wires. 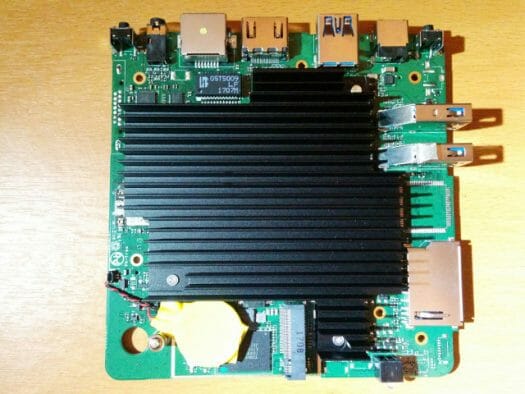 You will need a 22mm wide and 42mm long M.2 (or 2242) with at least an “M” slot SSD. The socket is near the yellow battery which the SSD actually covers when installed. 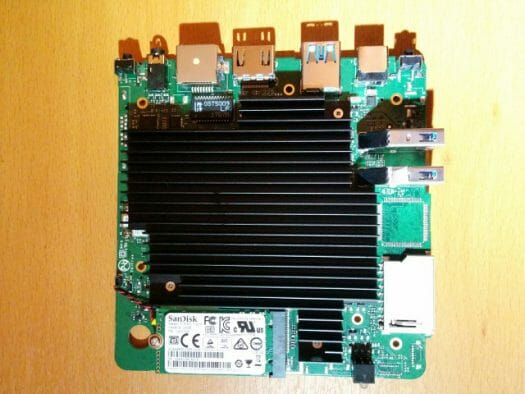 Windows can then be installed using a Windows 10 Disc Image (ISO File) downloaded from Miscrosoftand written to USB. 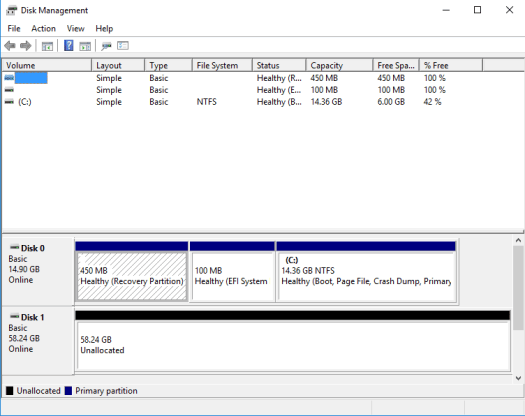 Except that activation didn’t work. Research seemed to indicate that this was because the drive was seen as a removable device which apparently Windows doesn’t like. 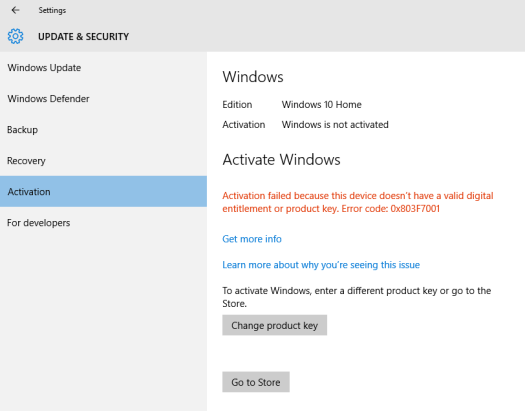 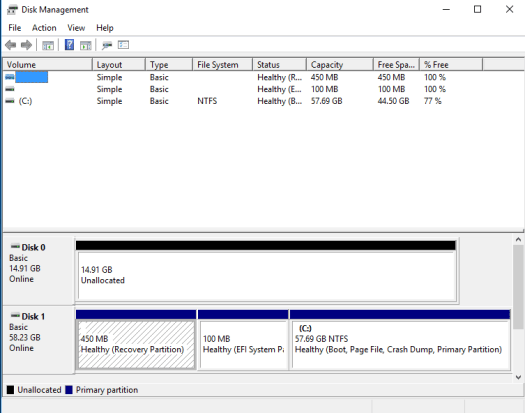 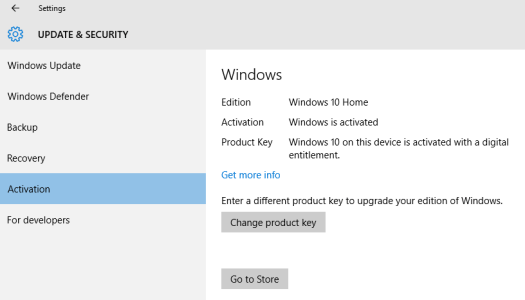 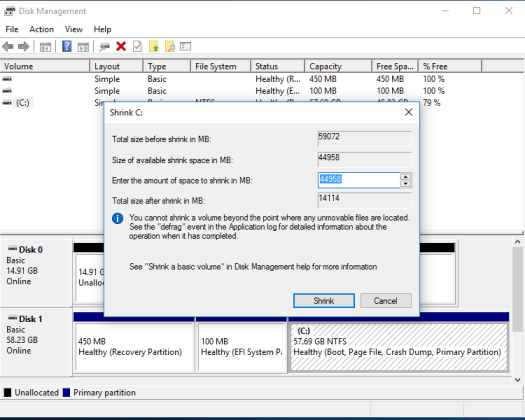 and moved to the M.2 SSD using an Ubuntu LiveUSB and the ‘dd’ command 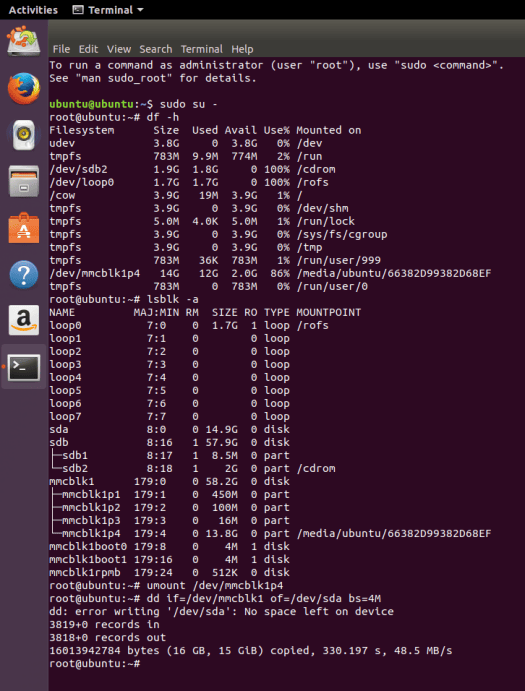 after which the M.2 drive needs to be ‘fixed’ using ‘gdisk’ 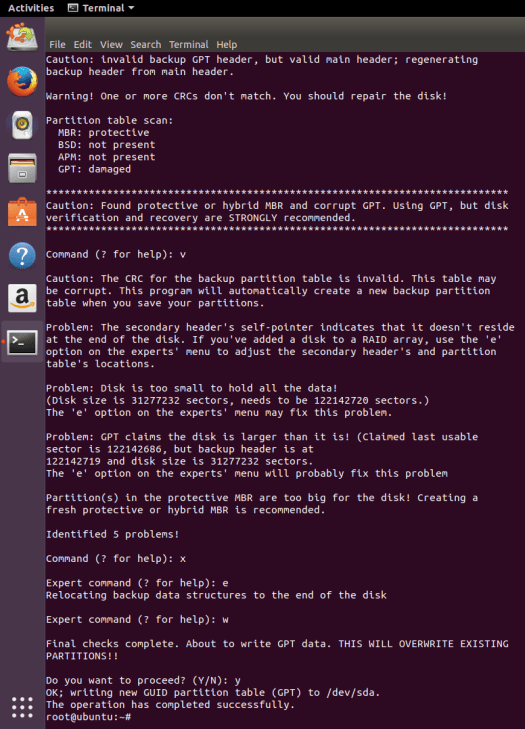 and the original eMMC wiped using ‘gparted’ to prevent conflicts Once rebooted the M.2 should be resized
and after performing updates the M.2 SSD is the C: drive with activated Windows
Although fine as a proof of concept I only used a relatively slow and small capacity (16GB) M.2 SSD. The real question was whether the initially installed Windows could be moved to a larger and faster SSD? The answer is yes!
And when using a 256GB M.2 SSD 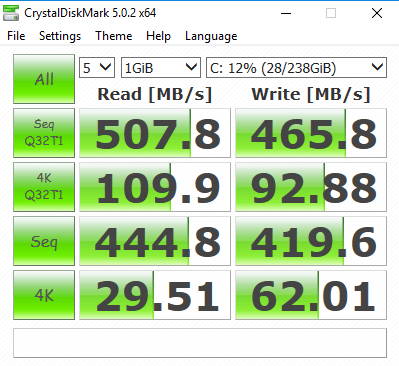 an improvement in performance is seen
The fundamental consideration in choosing this device is whether you have the need for 8GB RAM over 4GB as this is an USD 80 question. The slow eMMC whilst disappointing can be overcome through utilizing the M.2 slot. However, it is worth checking how readily available 2242 M.2 SSDs are as they are not common in Australia for example. The price vs specification still favors these type of mini PCs when compared to NUCs and similar. However the convergence point is close, especially when factoring warranty and support. Overall the Apollo Lake CPU offers a slight improvement to last year’s Cherry Trail devices and the passive cooling of this device are definite positives with HDMI 1.4 being the obvious negative, although the limited BIOS might also be too restrictive for some.
I’d like to thank GearBest for providing Beelink AP34 Ultimate for review. If you are interested, you can purchase the device on their website for $259 including shipping [Update: Coupon GBAP348 should lower the price to $239.99. Valid until October 31st.] You’ll also find the fanless mini PC on Aliexpress, just make sure you select the blue version if you want 8GB RAM, the gray version for 4GB RAM.

be carrefull for linux stability with this intel familly N3540.
I have an N3450 laptop and i have to deactivate c-cache “intel_idle.max_cstate=1” in the grub to keep a stable OS without random hanging. it’s more power hungry in deep sleep.

What a palava to install the M.2 drive.

And putting in that Tosh eMMC really does hamper the boxes ability.

Couple these things with the awful Beelink support and I’m glad I followed my gut instinct in not purchasing one.

@Ian W MORRISON (Linuxium)
Thank you (also for the great review). I’m looking for performant M.2 2242 (SATA) SSDs for quite some time.

Great review! I would like to use only mainly Linux through an extra SSD – the MyDigitalSSD – and use Windows 10 through Virtualbox whenever needed. Can the Windows 10 license be transferred to a Windows VM ? How shall we proceed – need to activate Windows 10 on eMMC first ? Windows licensing is such a pain – but fortunately licenses can be bought through Ebay if needed …

@number6
Not tried, but it looks feasible by creating a VMDK file in Linux that points to the eMMC flash where Windows is installed: http://www.serverwatch.com/server-tutorials/using-a-physical-hard-drive-with-a-virtualbox-vm.html

@number6
Windows activation might see the VM as different ‘hardware’ so why not leave Windows on the eMMC and install Linux on the M.2 SSD and run as dual boot?

Thanks cnxsoft & Linuxium for your replies. Multiboot can be an option to start – but after sometime I always find it painful.
Maybe I can transfer the license to a VM by contacting Microsoft later on – Retail license is way less restrictive than OEM : http://www.velocitymicro.com/blog/difference-between-retail-original-equipment-manufacturers-oem/
If not maybe I will have to consider using Microsoft – free & valid for 90 days VMs : https://developer.microsoft.com/en-us/microsoft-edge/tools/vms/
I will also consider the VMDK solution when I’ll receive the SSD drive – and do some research in the meantime.

I think this is an amazing review. It’s very possible that I have found my ultimate media pc for streaming radio, watching movies, and hook up for my picoprojector. Yep, I see that needs a pretty m.2 sata storage, and perfectly can hide it under the shelf. Thank you again.

@bob
Which one, Chuwi?

Now that is clear that it’s not possible to reinstall Win10 directly to the additional SSD, can I just move the original OS from the eMMC to the SSD?

For Windows 10 to work on the SSD you need to follow the instructions provided by Linuxium in the post above. Better backup any data you had before.

@Jean-Luc Aufranc (CNXSoft)
Yes, but my point was slightly different: Linuxium cleared the original Win10 installation on the eMMC because he expected to be able to setup a brand new one directly on the SSD. Since this didn’t work he was forced to reinstall Win10 on the eMMC and then transfer it to the SSD.

Knowing that, can I just move the original Win10 installation from the eMMC to the SSD or I really need to reinstall Win10 on the eMMC first?

Well, well – unbeknownst to me, AP34 had already been reviewed on cnx (thanks @Ian W MORRISON (Linuxium)) while I happened to buy it on BG for $150 recently (black friday deal). Looks like I got a bargain.

The unit I just purchased contains 10 Pro. As you received yours only a few weeks before me, did you get Home or Pro?

The first thing it did was download the latest Windows 10. The little “hard” drive got pretty full, pretty fast. The download was over wifi. I’ve since hooked it up to the LAN. LAN is about 3 times faster than wifi.

I am pleasantly surprised at how perky this thing is.