Over the last few years, I’ve written several article about LoRaWAN, Cellular IoT, and Sigfox based long range low power IoT solutions. DASH7 is another LPWAN (Low Power Wide Area Network) standard that operates on the same 868 and 915 MHz ISM bands as LoRa and Sigfox, but has much lower power consumption, and the cost of a shorter range up to 500 meters, instead of the 5+km associated with LoRa or SigFox. 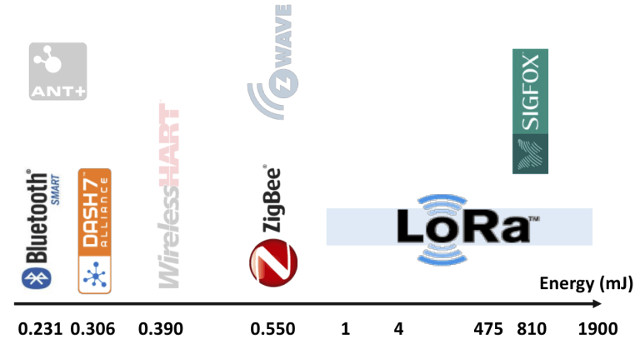 The DASH7 Alliance Protocol (D7A) is an Open Standard, and if you want more details you can download version 1.1 of the specifications on DASH7 Alliance website. I’m writing about DASH7 today thanks to an article on ST blog about Wizzilab’s Wizzikit, an evaluation kit and framework for DASH7 with a gateway, and several nodes that can also optionally support LoRaWAN and Sigfox protocols.

The kit is comprised of the following items:

You’ll also need to add you own USB power adapter for the gateway. The kit also comes with access to the company’s DASH7Board cloud service. The Wiki includes some information, including a quick start guide explaining how to register the gateway, and start loading the demo code using mbed. Since DASH7 is much more power efficient than LoRaWAN it can either be used to prolong battery life, or to send more frequent messages for example to control actuators. With LoRaWAN, downlink access can only be initiated by the end node, but DASH7 is bi-directional allowing for OTA firmware upgrades. The solution was showcased a few months ago at ST Techday with two demos: sending a message to a single node, and OTA code upgrade (actually picture upload) to multiple boards with a broadcast message.


Wizzilab’s Wizzikit is sold for 299.00 Euros with either 868 and 915 MHz band. Further details on be found on Wizzilab website.