I’ve recently started to write a bit more about long range LPWAN standards for IoT applications, especially LoRa and Sigfox, as commercial networks are being launched, and relatively low cost hardware platforms are being introduced to the market. There are also other highly expected standards such as Weightless and LTE Cat M that will bring more competition to the market. Ingenu RPMA (Random Phase Multiple Access) is another available standard that’s been in deployment for a while, and based on an earlier comparison of  long range LPWAN standards, it comes with long range, supports up to 384,000 nodes per “sector”, operates in the unlicensed 2.4 GHz ISM band, and offers high combined uplink and downlink bandwidth than competitors. Ingenu recently contacted me and provided some more details and information about their technology and development kit.

All standards can have node powered by a battery for over 10 years, but based on that table RPMA does seems to have some advantages in terms of coverage, capacity, throughput, security level, scalability, and mobility support.

Those charts are extracted from the Ingenu’s marketing documents, so they’ll obviously show RPMA in a positive light. However it does seems that if you have lots of nodes, and bandwidth requirements higher than what can be delivered by LoRa or Sigfox, RPMA appears to be a potentially better solution. The 2.4 GHz band is normally quite busy, so I wonder if there could be some limitations here, and some countries may also have restrictions on the emitted power. RPMA deployments started in 2011, so they already have an installed base on several continents for industrial, agricultural, and security applications, which includes 38 Private Networks as well as the “Machine Network” in North & South America, EMEA, and APAC regions. 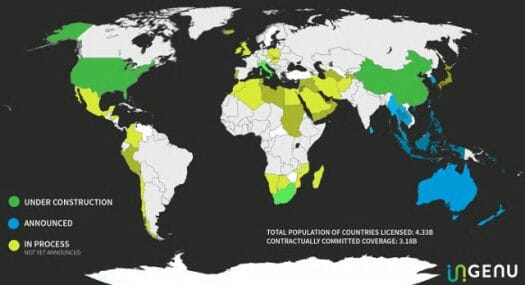 Support in the Asia Pacific regions is certainly a plus, as this week a French company wanted to send me their Sigfox & LoRa sensors kits for evaluation, but they had nothing working in South East Asia, so it will be for a little later.

The company can provide RPMA devkit to their customers in order to get started and evaluate the technology.

The rACM (reference Application Communication Module) tools are used to control the kit, and since they are written in Python it will work on Windows, Mac OS X or Linux. Communication occurs over a REST API or Advanced Message Queuing Protocol (AMQP) open standard messaging protocol, and devices can be managed through a platform called Intellect. Quick Start Guides are also provided to customers to show how to set up pulse meters, UART, GPIO, and more… 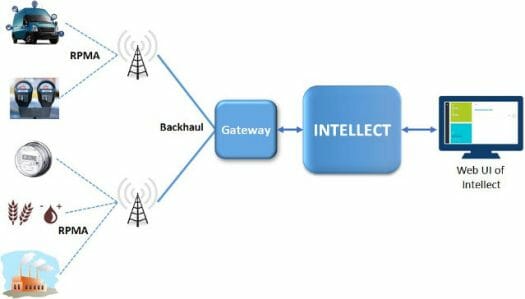 You’d use the devkit with RPMA networks such as the Machine Network. You can check network coverage on Ingenu to find out if it is available in your location. If there’s no network in your location, but a network is expected soon, you can still evaluate RPMA technology by getting an Exploration Kit with two RPMA devkits and a rental RPMA access point. The latter gives some clue about about the use cases for RPMA, as while you can get one or two ~50 Euros LoRa nodes connected it to a LoRaWAN network or setup P2P communication, RPMA apparently requires an access point that expensive enough that it has to be rented. So RPMA is likely most suitable and cost effective for larger scale IoT deployments, and not for smaller or hobbyist’s projects.

You’ll get some more details about the hardware and software, as well as interesting case studies about existing implementations, on the Get Started page, or by directly downloading the Starter Pack with hardware design files, software tools, REST & AMQP source code examples, and documentation.

@paul
I think the network coverage page only shows info about the “Machine Network”, not other private networks setup in other countries. The world map – if up to date – still shows a lot of the worldwide is work-in-progress.

That first table is just full of BS… I mean just do a simple web search and you’ll find lots of inaccuracies.

Even if it’s as nice as claimed. It requires subscription to a service. For IoT, that’s a deathknell. You will largely not have industrial customers buy off on it unless it’s their only choice. (Hint: They’ll take 3G or 4G unless it’s vastly more expensive because it’s known, familiar, etc…)

This 10-year battery life *everyone* is throwing around is probably the most meaningless figure I’ve ever seen.

Some of the systems in this table will probably deplete an expensive primary lithium battery through leakage alone in this interval, while others could actively work at a low duty cycle for the same decade using a couple of AA standard alkaline.

Yeah there is a lot of shady stuff and even outright lies in some of this emerging long range wireless stuff. Just keep your guard up and watch out for traps.