Long range LPWAN solutions have just started to hit the market, and there are so many standards such as Sigfox and LoRa that it’s difficult to know who will eventually be the winner, or if different standards will co-exist over the long term, and in a general sense it might not be so easy to decide which one is best suited to your project without experimenting first. Pycom has a solution to this problem, as they’ve made a board similar to LoPy with WiFi, Bluetooth, and LoRa, but instead included 5 long and short range IoT protocols: Sigfox, LoRa, LTE Cat M1 & Cat NB1, Bluetooth, and WiFi. 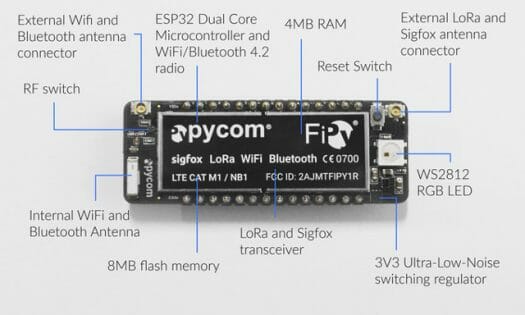 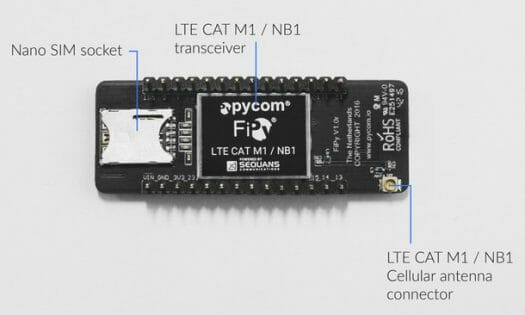 FiPy name is most probably derived from Five IoT protocols, and microPython support. As the board is compatible with WiPy, LoPy and SiPy you can use the usual Pymakr IDE and Pymate Mobile app to write your program and control the board. The company has also introduced two new add-on boards:

The project has just launched on Kickstarter as already surpassed its 25,000 Euros funding target. Most early bird rewards are gone, but you can pledge 39 Euros for FiPy board,  59 Euros (Early bird) for PySense Kit, 65 Euros (Early bird) for PyTrack kit, optionally adding 7 Euros for a Sigfox/Lora antenna, and 7 Euros more for an LTE-M cellular antenna. Shipping adds 8 to 25 Euros depending on the selected rewards, and delivery is scheduled for April 2017. Just a warning for users who are not based in the US or Europe: please make sure you comply with your country regulations, especially in terms of frequency used, as such nodes will have multiple kilometers range, and you may not want to break the law, and possibly get a visit from your local police or military…

Tomorrow, Pycom has a promotion on their webshop (https://www.pycom.io/webshop/) for currently available boards:

TOMORROW ONLY – FRIDAY 25 NOVEMBER. Get 20% off everything. Use voucher code BLACKPY16